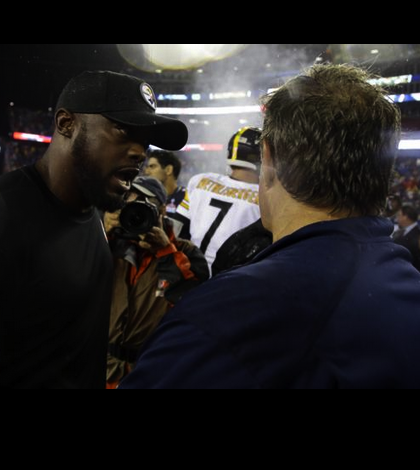 The first game of the NFL season did not disappoint – on any level. The New England Patriots got their win amid the triumphant return of Tom Brady. NFL fans got an interesting game that featured two powerful offenses. And observers hoping for more Patriots drama got that too, in the form of a questionable communications malfunction on the Pittsburgh Steelers’ sideline. This being the Patriots, the question has to be asked: did New England cause the Steelers’ headsets to malfunction? Here’s everything we know.

Patriots’ fans are quick to point out that nothing is coming of this issue (see further down in this article), but there is good reason why NFL fans are raising eyebrows. During the game with the New England Patriots, the Steelers’ headsets began to get interference from a local radio broadcast of the game. This is particularly odd because the headsets are supposed to be an encrypted all-digital system, which should be impervious to un-encrypted broadcasts like the over-the-air radio play-by-play.

Further complicating the narrative are these details, provided in a Steelers.com article, which explain how the Patriots were able to keep their own communications running despite the NFL’s “equity rule,” which required the Patriots to shut down their headsets until the Steelers’ problems were fixed.

Sideline reporter Michele Tafoya reported during the game that the Patriots’ headsets were shut off, but this now appears to have been incorrect information.

None of this narrative offers any proof that the Patriots cheated, but there are three suspicious elements: the fact that interference affected only the visiting team, the fact that such interference is hard to explain in an all-digital system, and the odd timing of the breaks in the disruption that allowed the Patriots to keep their own communications running.

The Patriots have a poor reputation for fairness involving visiting team communications equipment:

The timing of this incident could not have been worse for the Patriots. Fresh off the triumph of Tom Brady’s court victory in the Deflategate scandal, they were hit with an ESPN article that alleged, among other things, that the NFL’s disproportionate reaction to Deflategate was a response to a cover-up that had happened in the earlier “Spygate” scandal. The article went on to detail various ways the Patriots allegedly flaunted the rules, and the jamming of opponent radio communication was specifically mentioned. Less than a week later this new incident occurred. Did the Patriots jam the Steelers this time?

The Patriots have dealt with accusations of headset jamming at least three other times, and the Steelers were quick to reference the past in their comments. It’s “always the case” that headsets malfunction at Gillette Stadium, Steelers head coach Mike Tomlin said. This was no coincidence.

The Steelers did not file a complaint, and the NFL will not investigate:

This is the most important point about the whole controversy, and everything that happened should be viewed through this lens. The Steelers made a big stink at the outset, but ultimately decided not to file any formal complaint. Before the Steelers had even decided, the NFL announced that the issue was caused by a grounding malfunction and there was no foul play. It’s not clear how a grounding malfunction could have caused non-encrypted radio signals to enter into an encrypted all-digital system, but with no investigation pending, there’s no real way to find out. Something smells fishy.

That’s the fun part about all of this: it’s really a matter of how much you believe the NFL and the Patriots. History is not on their side. Now you’re armed with the facts; go forth and debate!