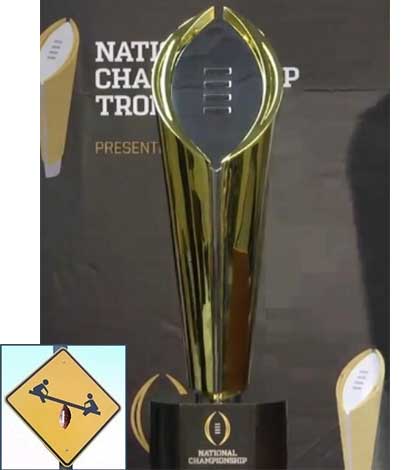 The 2014 college football season is upon us. It brings with it a brand, spanking new four-team playoff to appease those who did not need appeasing, AKA people who complain about anything.

We are less than a month away from everyone who hated the BCS so passionately going on countless diatribes about how the playoff committee is corrupt/stupid/both and how the fifth-best team in the country is getting a raw deal.

Let’s everyone agree that the system is pretty much the same, only now biased humans will decide the championship matchups as opposed to mathematics.

So in a world where every professional sport is trending towards numbers, mathematics, advanced metrics, SABRmetrics and whatever else you want to call it, why is college football going the other direction? They were ahead of the curve here, like the guy who threw the first forward pass. That guy got all the chicks!

Is the explanation simply that the NCAA is remarkably stupid (with this, among dozens and dozens of other things), or is something else at work here?

It’s too easy to bash the NCAA, and in the case of the ‘new’ college football playoff, its unwarranted. They’ve made many mistakes over their long history of ‘amateur’ athletics, but attempting to improve a championship system is not one of them.

Don’t misunderstand, I can not sit here with a straight face and say the NCAA got the four team playoff correct. Its something, possibly a little better, maybe not better at all, but a step towards change that needed to happen. The BCS system was working to generate attention and money, but it was a broken system for crowning a champion.

I’m all for math in sports. It is inherently how one gets better, whether you realize it as a player or not. Angle of the bat to hit a baseball, velocity of throw of the football. Math is important. And college football was unintentionally progressive when instituting the BCS system. Yet take a step back and really look at the math they were using. Apply the BCS formula to the NFL and instead of a team’s record determining their rank in the division and conference, we now add in a bunch of extra math to make things more complicated and over the heads of half the country. How is that better?

Your favorite team is 9-7, but ranked behind a team they beat twice with an 8-8 record because of strength of schedule and point differential and because you beat them early in the year instead of late in the year when it means more, or whatever other convoluted mess of math you want to throw at the standings.

Sports should not require math to understand them. Math should simply deepen the experience for those who want it to. That’s why I like the change to college football. The rankings may still be messed up, but the top four teams will play it out for the title. Make it eight and I’m very, very happy, but I can live with four teams for now.

I hesitate to actually answer your potentially rhetorical question, as the vast majority of college football fans are seen as beer drinking yahoos. This is a stereotype, whether true or not. One that the NCAA seems to agree with as they simply the ‘system.’