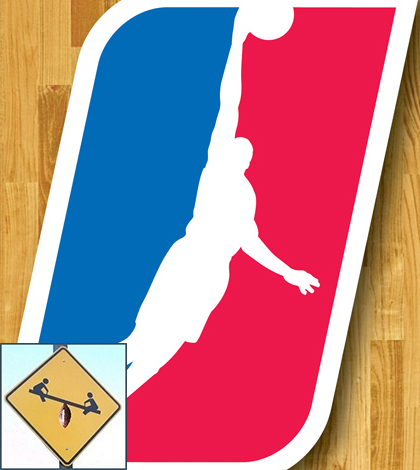 You do make an interesting point about splitting up the league into divisions since there might not be enough talent for a 30-team D-League. I would agree with that unless more foreign-born players come over to utilize it, or if high schoolers begin to select the NBDL over attending college.

As for your rules adjustment, that is already the case. Players have to be one year out of high school to enter the NBA draft. Most use that year to go to college but not all. A player can decide to play in the NBDL instead if he wishes (or even play overseas). That is already the case. Which is why some kind of tweak is needed. When there are players like this in the D-League:

I don’t see how it’s not a more effective growing tool for young players. I mean Flip Murray is an eight-year NBA vet with close to 5,000 career points. That’s a grown man these young kids will be going against. How is traveling to Murray State for a Wednesday night college basketball game a better test for a top prospect than playing against Mr. Murray?

I think a combination of our ideas may be in order to find the right balance. There needs to be a change to the eligibility rules for sure, but I enjoy the idea of an 18-team league separated by division. The only problem is though, who has the rights to a certain player if he wasn’t drafted by someone? And who is running the team? If, say, the Atlantic Division is sharing three D-League clubs and some undrafted player is a great distance shooter, who gets to add him if both the Raptors and the Nets want him? And what if New York wants its NBDL affiliate to play up-tempo and see if their prospects can run for 48 minutes but Boston wants to test out some post players. How does the coaching scheme work?

The idea seems okay, but to make the NBDL or NBAS efficient it might have to be a 30-team network.

I deserve the pie in my face; should have finished my homework on the specifics of the eligibility rule. But maybe the only real problem is that the NBDL is so new; not enough fans have it on their radars yet. It will probably take a bigger star than Amare Stoudemire rehabbing in the league for fans to latch on. Ahem, Kobe Bryant.

What’s missing for me is how this development league actually fits into the NBA equation long term. Its like there is this shiny new car in the NBA parking lot and they stuck their grandpa and young son inside. Neither one is capable of driving. If the NBA spotlighted the NBDL on All-Star weekend like it does the WNBA, perhaps we’d be having a very different conversation. The future stars game could be young NBDL stars, assuming these players were there and not riding the benches of NBA franchises.

You glossed over probably your best point in building the NBA and NBDL. International talent! This is how minor league baseball thrives, by signing raw talent from other countries and grooming them in the minor leagues. European and Chinese basketball is thriving, but they play a different game. The NBDL is a perfect place to groom these players for the NBA game. You get enough international talent in the NBDL and you can have a foreign future stars game on All-Star weekend. America is a crock pot of nationalities and the NBA is moving in this direction as well. Time to go all in boys.

[If you missed Part one – The new NBA D-league]