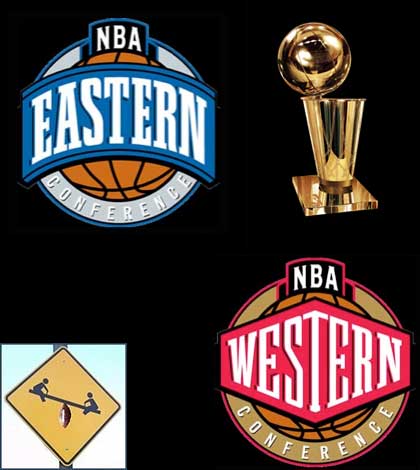 [Part one – An NBA Final Four for the ages]

Getting into the matchups themselves, it is interesting how the conference finals are developing. We know these are the best four teams in the NBA. As you said, they were the top four before the season even began, were the top four throughout the regular season and were the top four seeds in the playoffs as well. However, each conference final matchup is pitting a ‘stars and scrubs’ team versus a ‘team’ team, and it’s just a coincidence that things worked out this way.

In the East, Miami is the stars and scrubs. They have LeBron, Wade and normally Bosh, although Chris is always terrible against the Indiana Pacers and has continued that trend. The rest of the roster is old guys, vets and small pieces. Then there’s Indiana, the best starting five in the NBA (besides that whole six week stretch where they looked to be worse than the Atlanta Hawks. Let’s just forget about that). The Pacers have a couple pieces off the bench, but their strength is from one to five.

In the West, there is a similar story. The Oklahoma City Thunder are down to just two stars with Serge Ibaka out for the playoffs. The rest of that roster is pretty poor. For San Antonio, they might not have as good of a starting five as Indiana, but they have the best overall roster from one to ten.

So in a situation where both conferences have a mirror matchup taking place, you’d expect mirrored results, but that is not even close to happening. The Spurs are throttling the Thunder while Indiana v. Miami appears to be headed to seven games. What’s the difference here? It can’t be the Heat’s supporting cast because they are negligibly better than OKC’s, if at all.

Are we again at the point where everyone can see why LeBron James is the best player in the league even if he’s not the MVP? Case in point, if Kevin Durant was on the Heat for game two of the ECF instead of James, Miami loses. Guaranteed. Which is why Spurs/Heat is again the Finals matchup everyone should want to see.

The other huge difference is the one you noted. LeBron James is as incredible as we all thought he was and would be from his rookie season until today. And then there is Wade, who couldn’t compliment LeBron any better if this was a video game. But all of this is on paper. When it comes to how things play out, it’s the actual matchups that matter most.

In the West the Spurs match up wonderfully with the Thunder. Minus Ibaka its obvious that OKC has no answer for San Antonio down low. The other thing at play here; San Antonio wants this series more than OKC. Now I’m not saying the Thunder don’t want it bad, but for many of the Spurs’ players this is either their final season, or close to it. Add to that the humiliation they feel after blowing last season’s NBA Finals to Miami, and they are working just a little bit harder. I’m not ready to write this series off just yet, as the home team has won both games so far. I actually think it will go six, unlike the series in the East.

In the Eastern Conference looks have been deceiving. Miami got pushed around in game one, coming off a tough series with the Nets and starting on the road against the Pacers. That game was Indiana’s to lose, and to my surprise they did not. Game two fell to the Heat. It was close, but in hostile territory this can be expected. I don’t see this series going past five games. No matter how great a ‘team’ the Pacers are, Miami is better. They hold court at home and end Indiana’s season in game five.

So where does that leave us? We are once again at the point in the NBA season where everyone acknowledges the greatness of LeBron James. I’ve been rooting for him since round one for this very reason. He is otherworldly and I want to see a three peat. What happened to all the haters? Oh that’s right, they enjoy watching his brilliance just as much as me.

Durant and Westbrook versus LeBron and Wade would be fun, but as the Spurs dynasty comes to a close I’d like to see a rematch from last season. Tim Duncan has been a quiet guy his entire career, so watching him end things with two straight Finals loses can only result in some actual soundbites. I’m ready.