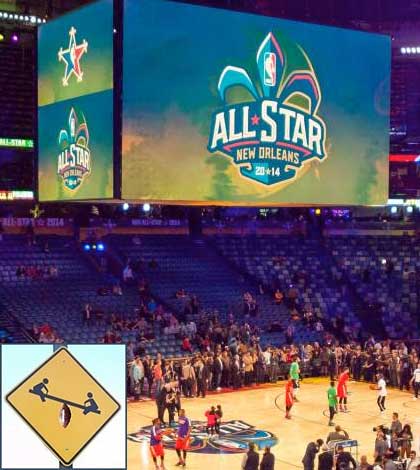 Another NBA All-Star weekend is in the books. With fans having grown tired of past iterations, the NBA decided to mix up things a bit this year. While the competitions were still the same, the objectives were slightly different.

The skills challenge was played with pairs of players rather than individuals competing by themselves; the three-point contest added a money-ball rack that each shooter could position wherever they wanted around the arc; the dunk contest was melded into a team event with one conference winning, rather than one player; and the entire Saturday night was a challenge between East and West, attempting to earn the most money for charity.

All of the changes made some semblance of sense for an event that had been losing its luster. However, not all hit their mark. The dunk contest felt cut off by starting with a dunk-type warm-up and all participants essentially only performing one, individual dunk each. The rising stars game is still a travesty; it was more entertaining to watch the celebrity game preceding it to be honest.

With that in mind, there are always dozens of ideas of ways to improve the weekend. Some are takeoffs of things that are already happening. Others are tweaks to rules or new events entirely that would hopefully generate more buzz.

I am going to throw out some of the more popular tweaks from around the web. Along with some of the changes the NBA has already made, I want you to rank these in order of what you’d want to see most. Also, for the ideas not instituted, give me a list of most likely to least likely to occur.

– Award huge amounts of prize money to the players to encourage them to participate and try their hardest (applicable in any event but aimed at the dunk contest). This seems almost offensive after the strides the NBA has taken to hand out oodles of charity money instead.

– Really go for H.O.R.S.E. It was attempted one year I believe, and the players were not shooting interesting shots or shooting well for that matter.

– High-dunk competition. Rather self-explanatory, but the rim height would keep going up until only one person remains.

– Half-court shot shoot-off. This is a popular suggestion even though the shooting stars competition already exists and always just comes down to a half-court shoot-off anyways.

The idea of NBA All-Star weekend is way cooler than the actual event. I’m going to say right up front that I love the idea of playing for charity. I realize that the NFL players get a bonus for being in the Pro Bowl, and there is no reason this can’t also be true in the NBA, but the skills competitions are perfect for a charitable tie in.

I was also no fan of the team dunk competition. Did not work for me. The best part of the dunk contest was individuals one-upping each other. This leads me directly into your list and my favorites. I’ll leave the likelihood until part two, where I’d love to explore execution of some of these ideas as well.

Your list is a good one and I’m starting with my favorite part of All-Star weekend. I love the dunk contest even more than the all-star game itself. So coming in at number one, a new High-Dunk Competition.

1. High-dunk Contest: Make this an individual competition again and allow players a set of five dunks to pick from. You can only use each dunk once, so choices are key as the rim gets raised from round to round. I don’t agree that this is self explanatory, but its definitely awesome!

2. Two on Two competition: This could work in one of two ways. You can pair an NBA player with a WNBA player and have it be co-ed. Or you can take one player from the East and one from the West and pair them up. Lebron James and Blake Griffin versus Kevin Durant and Paul George. Love this.

3. HORSE: I can’t believe this has yet to be done right. This competition with dunks, spinning layups, shots over people standing on chairs, and half court shots would be amazing. There is no limit to a shot in HORSE. No limits!

4. Half court shoot off: If we can’t get the HORSE competition right, we can at least see guys flinging the ball from half court. Another No Brainer.

5. One on One competition: I like this new event the least and actually would be fine leaving it off the list entirely. One on one, playing to five points or whatever, is fun for those playing, but is not nearly as fun to watch. Two on Two solves all the viewership issues with a One on One.

BONUS: Sliding in between HORSE and the Two on Two competitions, I’d like to propose a Three on Three competition with two pro basketball players and a celebrity. I think we should do this with an NBA guy, a WNBA gal, and a celebrity. The celebrity will be greatly over matched, but it would be a team game. It would also do great things for the WNBA when people realize just how good they actually are compared to merely athletic adults.