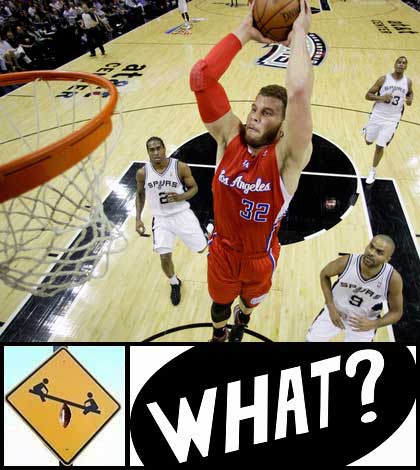 The NBA playoffs bring basketball front and center with “They said what?” sports quote game. Which NBA stars made these sports quotes famous?

After one round, Dan is ahead 2 points to Todd’s 0 points. Oh yeah!
Now for round two. “They said what?”

Let’s begin the next round. We haven’t played in a while so I hope your skills are up to snuff. Here is your quote. Tell me who said it.

“Everybody pulls for David; nobody roots for Goliath.”

Hint one: This was said by a former professional athlete who was always considered a Goliath-type himself.

Hint two: This player was thought of as a career loser, especially compared to his greatest in-game peer.

Hint three: Despite the label, he is in his sport’s Hall of Fame and is considered one of the 10 greatest players of all time.

I’m thinking the NBA, since the ‘Goliath’ moniker is a nickname usually reserved for basketball. But nailing down an era is tricky.

Anyone who was a career ‘loser’ couldn’t have won a title and probably faced off with Michael Jordan. Just saying.

As for the ten greatest NBA players, its a fluid list so I’m going with a personal favorite. Sir Charles Barkley is my guess. Definitely one of the greatest at his position.

Superb guess, but unfortunately (for you) it is the wrong guess.

Chuck seems to fit the hints rather well, and you did nail the correct sport. The Round Mound could be considered a Goliath-type even though he’d be an undersized power forward in today’s game. He was certainly a career loser in that he never won a title, and if you attempt to compare him to Michael Jordan, it’s no contest.

The part where Barkley falls short is the final bit. I’m not sure he quite cracks the top 10 all-time. That’s a prestigious list. The man who does crack the list and is the correct answer here is Wilt Chamberlain, always the stat-stuffer and love-to-hate center compared to Bill Russell. You can even get the quote on a t-shirt.

Damn. Wilt Chamberlain is certainly more Goliath than Barkley. Prepare for my reply.