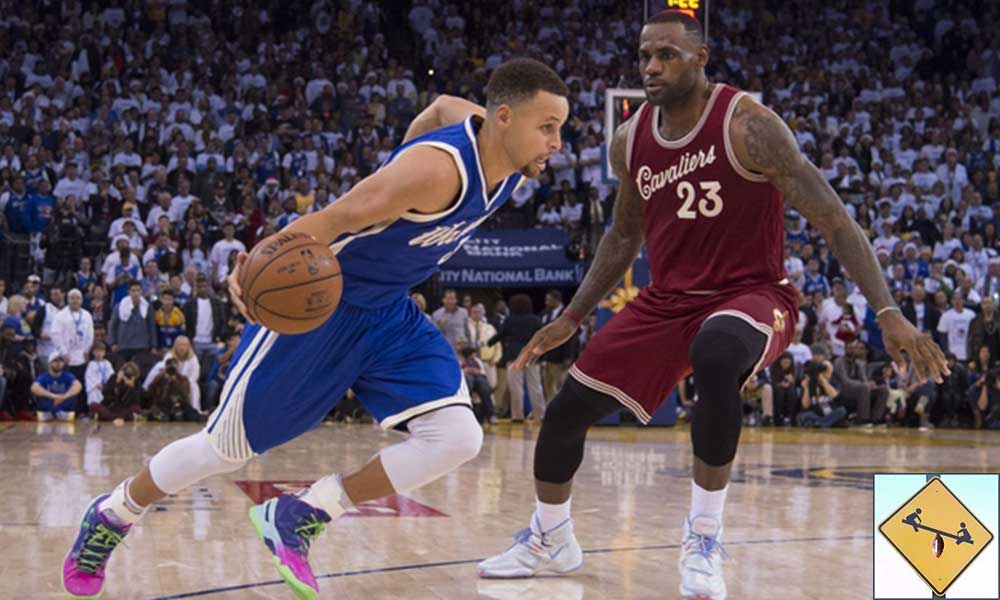 Forget the obvious stories of the NBA Finals 2016, these four crazy storylines are where the real action is at. The Warriors are villains and so much more.

We have reached the 2016 NBA Finals between the Golden State Warriors and the Cleveland Cavaliers, and Game 1 is already in the books. The home Warriors took care of Cleveland, winning 104 to 89. It was the Cavaliers’ second-lowest point total of the postseason.

The obvious storylines heading into this series and coming out of this game are, well, obvious. Golden State has a scary offense and a better defense than Cleveland. It would be up to the latter’s outside shooting to balance the tides, and that didn’t happen in Game 1. Cleveland shot just 7-of-21 from three. The Warriors were hardly better from the outside, but they didn’t need to be.

But there are a few far more interesting storylines to keep an eye on as this series moves forward. Since there are two days off between games to begin here for some odd reason, we have plenty of time to digest and pontificate.

Crazy storyline number one: Cleveland had more trouble with bench guards Shaun Livingston and Leandro Barbosa than it did with Stephen Curry and Klay Thompson.

Livingston scored a playoff career-high 20 points, and Barbosa chipped in 11. The two combined to shoot 13-of-15 from the floor. On the other hand, Curry and Thompson combined for just 20 total points and shot 29.6 percent from the field. The bench won the game for the Warriors, and I’m not sure if that bodes well for the Cavs or was a terrible sign. They controlled the Splash Brothers but still got blown out.

Crazy storyline number two: Kyrie Irving continues to be a turnstile on defense, and despite his team-leading 26 points, I continue to question whether the team is better off with him on the bench.

Irving had a -10 plus/minus in the box score, which is hardly any worse than his starting teammates, but it just seemed as though someone scored against him on every possession regardless of who it was: Livingston, Curry, Harrison Barnes, whomever.

I’m not sure how it happened. For the longest time this season, even as they were kings of the hill and defending champions, everyone was rooting for Curry and the Warriors. At some point, that seemed to switch, at least in my mind if not for the world at large. I don’t think it happened until the postseason actually, but now Golden State seems like the bad guy.

Curry is obnoxious and arrogant. He makes tons of silly plays and careless passes, as well as so many of those horrid shots that usually go in. These are traits of a player that should be discouraged, yet people love it from him. And then he always has little gestures during games that come off as so haughty.

Draymond Green is obnoxious too because he just seems like a dick. Even beyond the dirty plays that he has been caught doing, he is dickish in interviews and in his demeanor on the court.

Iguodala is a complainer; Bogut stretches the boundaries of decency. I like Thompson though! But overall, this team has morphed into a bunch of jerks. LeBron James was always the villain. The Cavs were supposed to be the villains trying to prevent Golden State from making history. During Game 1, I felt the exact opposite.

Those are some excellent crazy storylines for the NBA Finals, but you missed one that is probably the elephant in the room. Who is the greatest player in the NBA right now?

LeBron James has been considered the NBA’s top dog for many years, up until last season when his crown was legitimately taken away. Now Steph Curry is wearing it proudly, after a relentless regular season that saw him destroy the three point scoring record and his team take down the wins record. Cracks were exposed in his armor during the playoffs, so the victor of the 2016 Finals will also take the crown.

If Curry wins a second title in back to back fashion, he easily keeps the crown and shoves aside LeBron in the eyes of nearly everyone. But if James wins another title with a different franchise, in Cleveland no less, he will take back his seat on the throne. He will have achieved his ultimate goal as an NBA player, bringing a title to his home town, taking down the league’s current king in the process. This is a monster storyline!

The other three crazy storylines you mentioned are equally as intriguing. I do believe the dominance of the Warriors’ bench is a positive sign for the Cavs. They were able to shut down Golden State’s best players. The bench is unlikely to play at such a high level with any consistency, let alone on the road in this series. What truly worries me is your second crazy storyline.

Irving’s poor defense is a major problem for Cleveland. It could easily negate any advantage gained by the Warriors relying on their bench for points. He is as important to the Cavs’ success as James or Love, so if he can’t improve his defense, this might be a short series.

As far as the Warriors being villains, maybe it’s because I live in California, but I don’t see it. Sure they flaunt it on the court, but this is the current landscape of professional sports. They simply epitomize what fans want to see from their athletes. Emotion and celebration. What has really happened is that LeBron is no longer a villain. He’s almost becoming a hero as he attempts to topple the “juggernaut” that is Golden State. Fans always gang up on the most dominant team, unless they join the bandwagon. If there’s more kicking and such, perhaps the villain moniker will stick. Otherwise I don’t see it.