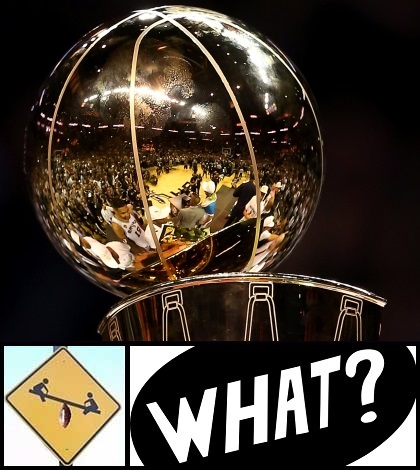 LeBron James and Stephen Curry are putting on a show, and we’re celebrating with an NBA Finals 2015 edition of What ha… happened? Defense wins championships, unless you’re Pau Gasol.

The basketball season is reaching its conclusion. Just a couple of games remain before a 2015 NBA champion is crowned.

Despite the high-powered Golden State Warriors facing off against the lethal (when healthy) Cleveland Cavaliers, defensive acumen and effort have been major cogs and storylines in this series. With no Kevin Love and no Kyrie Irving, the Cavs have won with defense, pressure and effort while GS actually had the top ranked D in the league during the regular season.

My question is, take a gander at this Pau Gasol gif and tell me, Wha ha happened? Would Pau even be allowed in the arena with this defense if his team had made the Finals? And which is the better technique, the shouting or the patty-cake hands?

That pansy like defense has earned Pau Gasol an immediate disqualification. His team can either play without him, or join him in the locker room.

You see what ha… happened was that Gasol got twisted, mesmerized by a Chris Paul crossover dribble. He figured he had some backup in the paint, but no such luck. Blake Griffin grabbed the sweet pass and took it straight to the hole.

Pau didn’t want to look lazy, so he went ‘all out’ for the ball and for Griffin, without fouling of course. Who would blatantly foul a player going for the easy dunk, just to prevent him from scoring easy points? That feels unsportsmanlike.

Gasol took the high road and flapped his hands briskly in Griffin’s direction. This play was one for the ages, as no grown man in NBA history has ever defended the basket like that.