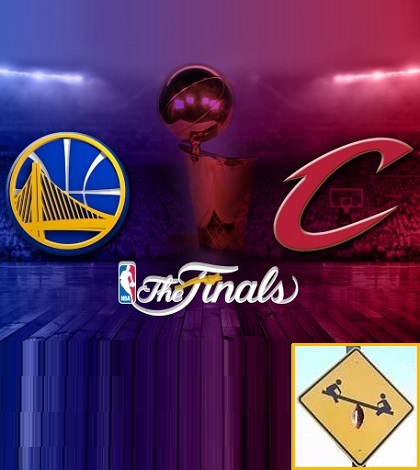 The NBA Finals 2015 features the league’s two best players, but who’s the best future leader of an NBA franchise? Its Stephen Curry versus LeBron James for the league’s top talent.

Game one of the NBA Finals is in the books. The series is far from over, but that outcome is not even what I’m concerned with here. I want to debate the merits of LeBron James versus Stephen Curry for the future. Look past 2015 and the decision isn’t quite as simple as it would have seemed even just last year.

LeBron is still the best basketball player in the world. He is the best all-around player and that will remain the case even if Golden State takes down his Cavaliers for the championship. James also used to be the no-doubt most unstoppable player in the NBA. This is the point that is no longer a given and makes Curry’s future so intriguing.

Curry isn’t a great defender. He isn’t terrible like Kyrie Irving, Damian Lillard or 2014 James Harden, but he doesn’t approach LeBron’s level on this side of the ball. But on offense, I feel as though Curry has passed James in terms of being unguardable. This seems logistically insane because if the two were to play one-on-one, LeBron would likely demolish Curry when he had the ball and at least contest most of his shots in the reverse matchup. But in the flow of a 5-on-5 NBA game, Curry is the better weapon.

It is arguable that Stephen Curry is now the greatest shooter the sport of basketball has ever seen. He is already the most prolific three-point shooter in NBA history. Whether coming off screens, on a catch-and-shoot or pulling up from 30 feet off the dribble, you expect every shot he takes to go in. ESPN stats did some work during the Western Conference finals that showed Curry was shooting better from three than Dwight Howard was from the foul line in the same amount of attempts. It was mind-blowing (from both players’ perspective).

If Curry is going to keep doing this for years to come, and there’s no reason to believe he won’t, isn’t that the better piece for an NBA team? Obviously a lot depends on the supporting cast. If we’re talking about putting either James or Curry on a team of nobodies, James would fare better. But if we are taking either player onto our NBA title hopeful, I almost think Curry is the way to go.

This seems ludicrous since I’ve admitted that James is still the better basketball player and will likely remain so for at least a few more seasons. It is also weird because James is having perhaps his worst shooting postseason of his career yet is still averaging 27.6 points, 10.4 rebounds and 8.3 assists per game.

You know what, I might have talked myself back into taking LeBron again. He is the king after all.

Take it to the House

It’s funny how an injury can seemingly change the entire landscape of the NBA and its two best super stars. The 2015 NBA Finals has the games two best players facing off, but are they truly the best of the best, or just this season’s top dogs?

The answer is simple, LeBron James and Stephen Curry are the current best players in the NBA. But it wasn’t more than a season ago that Kevin Durant was the number two gunning for LeBron’s crown. We asked the same question back then. Would you want James or Durant long-term? Considering Durant’s injury, and the state of his team after losing him for the 2015 season, that debate now feels foolish. He certainly made his teammates better and elevated the Thunder to elite status, but he himself fell out of the conversation.

I mention Durant because Stephen Curry also won the league’s MVP. He too has elevated his team to elite status, yet I’m not convinced he and the Warriors will be this great for the long haul. Consider Curry’s first six seasons in the league, including this one. His Warriors have made the playoffs for three seasons in a row now. Yet it took an early exit by the Spurs and no Kevin Durant for his team to conquer the Western Conference and finally reach the NBA Finals.

The flip side for LeBron James is a seemingly weaker Eastern Conference which his teams have dominated for years. James has made the playoffs in ten straight seasons, missing them only in his first two years in the league, and reached the NBA Finals six times. Comparing his streak to Curry’s adds little to this debate. Curry only missed the playoffs in his first three seasons with the Warriors.

Ultimately this comes down to Stephen Curry being able to maintain dominance versus the number of top level seasons that LeBron James has left. Curry has dominated for at best two years now. James has at worst five superstar seasons left in his tank. There truly is no wrong answer here.

I’m taking LeBron James for his defense and his proven track record of elevating weaker teammates, his NBA Finals streak, and his smooth transition from villain to hero. That alone added several seasons to his illustrious career. This is no knock on Curry, who will be a Western Conference force for years to come. But if we are talking about championships and who can lead his team to the most, Curry won’t get there every year. LeBron has already proven he can and will.