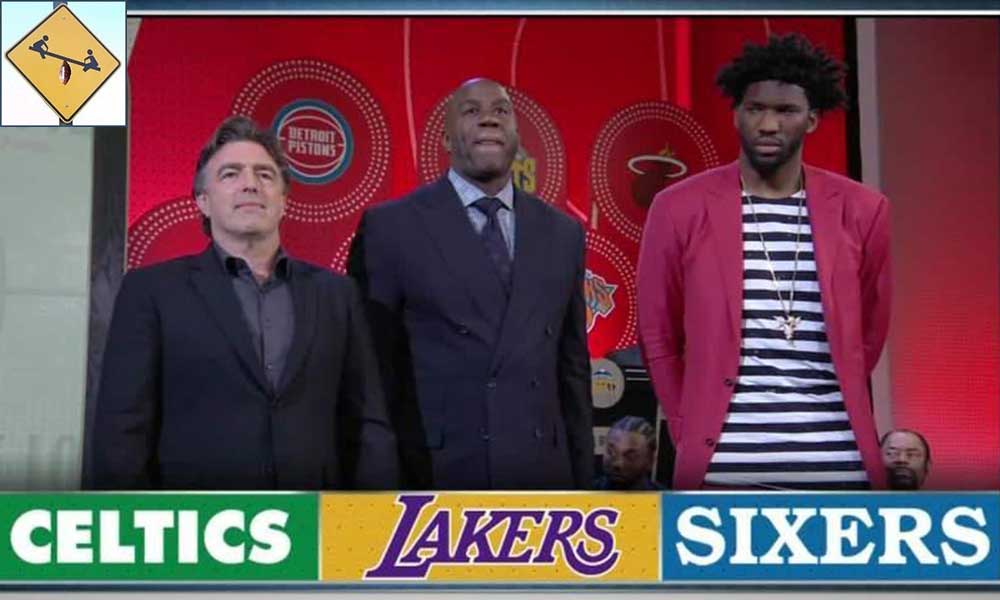 There are two camps when it comes to the NBA Draft Lottery: those who think the entire spectacle is idiotic, and those who love it. Can it be both? NBA debate!

When it comes to the Draft Lottery, there are those who find it stupid and those who love it. I am safely in category two, though I must admit there are ways to improve the event.

If you fall in group one, I can understand. First off, the premise is stupid. Ping pong balls pop out of a bingo machine to determine which loser franchise picks the best basketball prospect. Sports reward failing on purpose like no other field of work. Then, for half an hour, we are introduced to team representatives who do nothing more than sit in a chair and wait for the same information we are receiving. Names are called one by one starting from the 14th pick and advancing down to one. There is literally nothing to glean from the telecast that can’t be determined just by reading a written list of the NBA Draft order after the lottery has taken place. The whole thing is incredibly stupid.

I am a fan though! I like seeing who each team sent as its representative. I like hearing the order called out, and seeing when a team hopped up into the top three selections. I like the cliff-hanging commercial break between picks four and three. I like the reactions from the team reps, both good and bad. I despise the interviews, but that’s a personal thing. I hate all sports-related interviews, both in-game, during halftime, during offseasons, or otherwise. But everything else is pure gold.

ALSO ON BUZZCHOMP: New York Yankees Real or Phony in 2017?

However, the premise still bothers me. There should be a way to win the top picks in the draft rather than lose to get them. This year we had a respite from the norm, but only because of previously bad trades that allowed teams to swap picks that became really good selections. Boston and Philadelphia ended up swapping picks with Brooklyn and Sacramento respectively to receive their first and third picks. But normally, every top pick is earned by sucking. This is how drafts work.

Do you see a way to fix this? I feel like we at least mention this every year in passing. But new ideas come to the forefront every year as well. The latest ideas are some mix of playing an actual tournament of basketball games (between all non-playoff teams) with the actual winner winning the first pick, or some way to limit teams’ lottery chances if they lose year after year.

With the former idea, things get tricky with pick swaps and teams actually putting forth effort in such a tournament. Why play if you don’t own your pick, or if you’re a veteran player about to hit free agency and leave, why bother? With the latter idea, barring teams from, for example, four straight lotteries or three straight top-fives, feels arbitrary and wouldn’t do anything to prevent three+ year rebuilds anyway.

Obviously, if this was able to be solved somehow, it would’ve been by now. In the interim, at least we have the NBA draft lottery show!

I love how amazing something so stupid actually is. The NBA Draft Lottery makes no sense, but accomplishes exactly what its goal is to perfection. A dramatic event was created out of nothing, by manipulating something simple into a complicated game of lottery on national television. I love that it exists. I refuse to watch. But I can’t wait to read the results!

There is a part of me that can’t ignore the ease at which the NBA Draft Lottery could be manipulated in favor of more popular franchises. Ironically, the first two picks in the 2017 NBA Draft now belong to the two most popular and historic NBA franchises. The Boston Celtics pick first, followed by the Los Angeles Lakers. Conspiracy? Unlikely. All of the fun is ruined by the lottery itself if we consider it rigged. A lottery is not fair, it’s simply good luck for the winners. Lucky for the NBA, its top two franchises won this round.

We debated in prior years the actual fun involved with a NBA tournament of losers, having the bad teams compete for the best draft picks. This sounds amazing on paper and is perfect for a video game. It fails on nearly every level in the real world. A draft inherently rewards the worst teams to make them better going forward and restore competitive balance. In the NBA, only the top two or three rookie players are truly transcendent on average. This makes tanking a valuable tactic. It also makes the NBA Draft Lottery that much more fun and meaningful.

Tanking only gets you so far. The lottery evens the playing field with blind luck. I’m still struggling to fathom how the Boston Celtics, the top team in the Eastern Conference this season, have the first pick in the draft. It seems even more unfair that the Los Angeles Lakers once again have a top pick. Players must become great, but a Lakers VS Celtics NBA Finals feels likely in five years time.

More Sports: Can Final MLB Projections Be Trusted in 2017?


Do we change things? No thanks. I’d much prefer to celebrate the stupidity of a lottery deciding which teams can get better, and which will remain irrelevant. Imagine if the top of the NFL Draft was decided by a lottery. Woah.