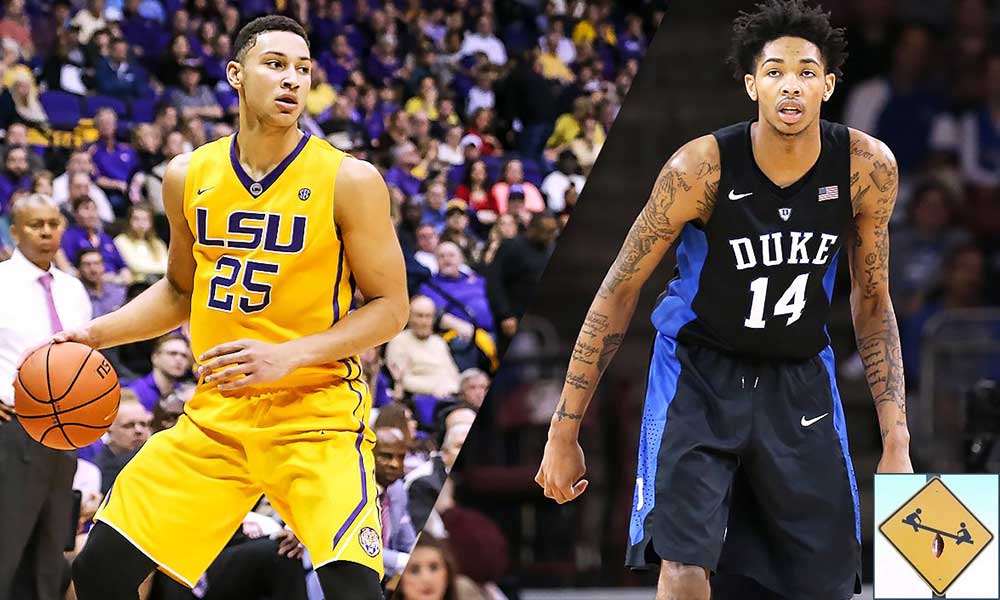 Big time trades and rumors with the Lakers, Celtics and Sixers all picking top three. Plus Brandon Ingram grabs number one overall in the NBA Draft 2016.

The 2016 NBA Draft is taking place this Thursday, June 23rd. It is quite a draft for those who are fans of wild possibilities, uncertainty at the top and generally interesting storylines. That, and three of the most successful franchises in league history, Philadelphia, Los Angeles and Boston, have the first three picks.

At the very top, the number-one pick decision between LSU’s Ben Simmons and Duke’s Brandon Ingram falls to the 76ers. It is a fascinating option at the top because neither player is guaranteed to surpass the other, yet both are well ahead of the rest of the crop of prospects in this draft. I would personally stick with Simmons as the number-one pick despite Philadelphia’s logjam at the power forward position. Though Ingram is the better shooter, Simmons seems to possess the higher upside in most other facets even if he isn’t there quite yet.

But Philadelphia isn’t just deciding on who to take at one. There is also lots of trade buzz with that aforementioned logjam in the front court. Jahlil Okafor and Nerlens Noel have been on the block as the 76ers attempt to find a point guard.

Other trade ideas have been floating around the rumor mill too, which adds further intrigue to the top of the draft. Boston may be looking to move pick number three in hopes of acquiring a piece that will help it compete in 2016-17. The Celtics are already a good team but lack a superstar. That player may be hard to locate at three, or it could be a number of years before they contribute at all. Then there’s Minnesota, who is reportedly shopping pick number five in hopes of acquiring Jimmy Butler from Chicago or a comparable young veteran capable of meshing with the up-and-coming roster the Timberwolves already have.

I’m not sure any of these trades will actually go down. I’m not sure anything all that interesting will end up happening in the draft. But there is so much on the table, I am beyond excited for the possibilities. The NBA season ended in miraculous, historic fashion. It would only be fitting that that level of excitement continues through the week of the draft as well.

Despite only two current upper echelon players in this year’s draft, the buzz surrounding picks one through five is incredible. I don’t think Philadelphia should trade its number one pick, but I do believe it happens. Their young stars have yet to all play together or prove themselves busts, and the two players atop the draft are very difficult to gage in terms of NBA impact.

Brandon Ingram is my number one pick. He’s the better shooter, as you noted, and played his college ball for one of the greatest coaches of all time. He’s a disciplined player who was taught and played with a winning pedigree. The same can’t be said of Simmons. I hated his body language on the court when his team got down. His attitude was a bit troubling off the court as well, with his team falling way short of expectations for college basketball’s self-appointed best player. Simmons may shine, but Ingram feels like the missing piece of a future champion.

With Los Angeles and Boston drafting two and three respectively, will Ingram land on one of these historically great teams? Boston could trade up and swap with Philadelphia, otherwise the Lakers likely get this draft’s best NBA ready player. After the top three, its hard to take much seriously.

I don’t see the immediate value in Minnesota’s pick, especially not on the level of a Jimmy Butler. This feels like a bad move for Chicago, unless its one piece of a larger trade puzzle. Rumors are also flying about the Bulls dealing Rose to the Knicks. I like the idea of rebuilding, but pick five won’t cut it for Chicago. This buzz is growing and I can’t wait to see who goes number one!