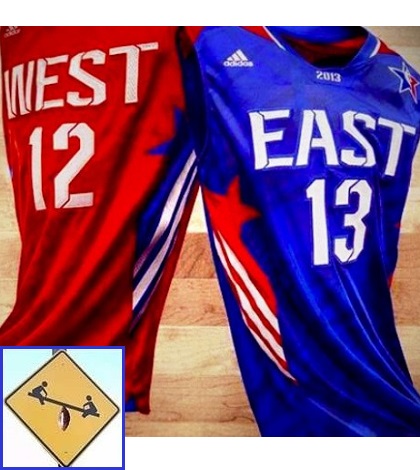 This NBA All-star weekend, the 3-point contest crushes the Dunk contest for star power and excitement. Why you ask? Disagreement reigns as NBA sports debate rages on.

It is hard to get the best players (or even the second-tier great players) to participate in the slam dunk contest. There is little upside. It is hard on their bodies, performing dunk after dunk in front of a huge audience with a time limit and judges waiting. The results are then ridiculed beyond belief because we’ve seen that dunk before! and so-and-so did it better three years ago!

If someone like LeBron participates, what can he really do to live up to those expectations? It’s a no-win situation.

The three-point contest is almost the exact opposite. There is no downside.

If someone great does poorly, it is immediately forgotten. It’s only the All-Star contest; it’s not a representation of real, pressure shots. And if the contest is awesome, unknown shooters can become household names or stars can back up their regular season success with direct wins over direct peers.

Vegas (or Bovada in this case) agrees with you. Stephen Curry is the favorite to win the three-point contest as 13/4 odds. It’s close though. Kyle Korver checks in at 15/4 and Klay Thompson is 4/1.

I should also point out that the NBA added two more participants, bringing this to an eight-man contest. The two additions are James Harden (star power!) and Marco Belinelli (returning champion!). Can this thing GET any better?

The odds have yet to accurately capture these players’ chances though, I believe because the public has yet to react to them being added. Harden right now is the underdog with the largest odds at 8/1. Him versus Curry is a fantastic precursor to what might shape up as the final duo in the league MVP race this spring.

Redick is a solid sleeper selection, as if any of these bombers can even be called sleepers. But I like Klay Thompson to win. This seems like the Year of Klay.

He has decidedly won the Klay or Kevin Love debate that raged on because of the possible Minnesota – Golden State trade this offseason. He set the record for most points in a single quarter with 37. His team is ridiculous, and he plays both ends better than Curry, making him a de facto MVP candidate himself, albeit a long shot at this point.

The Luigi of the Splash Brothers gets it done.

Calling someone Luigi is normally an insult, but with “Splash Brothers” Curry and Thompson, it’s definitely a compliment. I think a better video game analogy would be Mr. and Ms. Pacman. Obviously Pacman is more popular, a bigger name, and always comes first. But both characters have their own games and both do the exact same thing equally well.

You nailed the Three-point contest in a nut shell. There is no downside to participating and the same used to be true of the slam dunk competition. But I’m not buying your argument for why the bigger name dunkers have consistently skipped the annual throw down.

Are you trying to tell me that dunking twenty times in an hour is too exhausting for a professional athlete whose job is to play a forty-eight minute basketball game night after night? A game in which he runs consistently for a full thirty to forty minutes. That is completely bogus. You know what’s also bogus, the ‘pressure’ you alluded to when its a player’s turn to dunk. These are professionals and many of them take last second shots weekly. Asking them to run at the hoop and dunk the basketball does not compare to anything in a game that, you know, actually counts in the standings.

I understand why the NBA All-star break has become a literal break for players. I understand why they’d like a break half way through their season. But this was never the intention of the game and the weekend. It was not meant as a party cruise for players, but rather a chance for fans to celebrate the game they love by honoring the best in the game.

The only real point in this has to do with the dunks themselves versus sinking a three-point shot. Nearly every three pointer looks the same. The object is to make more than your competition. I don’t see how it’s any less grueling than dunking, but I do understand the ‘criticism’ concern with dunks versus threes.

Maybe this is all just cyclical. The Three-point contest is now becoming the new ‘hot’ NBA All-star weekend competition to watch. If they change the dunk contest to remove the criticism, stop judging dunks with a coolness score, and just make it about dunking from distance or how many can you do in 30 sec, then perhaps it will win back the fans and star players.

Wherever the stars go, fans will follow. Stephen Curry is now a superstar everyone should flock to this weekend.