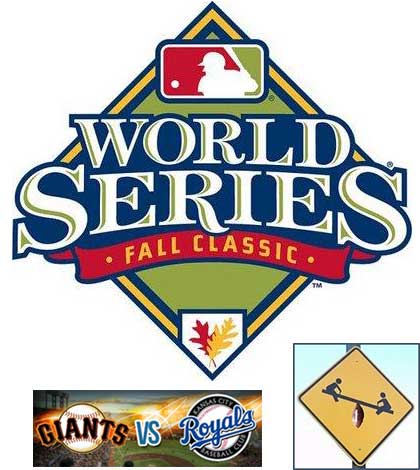 The World Series begins Tuesday night between the Kansas City Royals and the San Francisco Giants. Everyone has spent this past week trying to explain why each team is at this point.

Kansas City hasn’t lost a playoff game in my lifetime. (No, seriously.) It has swept each round thus far in 2014 on the back of its speed and bullpen. The hitters have made contact, stolen bases, tracked down everything on defense and the arms shut down any game in the late innings.

San Fran has made it this far on the back of its starting pitching and playoff savvy. The Giants have the best pitcher remaining in Madison Bumgarner, but he was also the best pitcher throughout the entire playoffs. They also have taken advantage of any mistake by the opponent, had timely hitting and generally looked like a team that is just supposed to win the World Series every other season.

Of course, what no one wants to acknowledge with anything more than a throwaway comment is that the reason these two teams are here is because who makes the MLB World Series is a pretty random thing. The Royals and Giants aren’t here because they are the two best teams in baseball. They’re here because, for a three-week stretch, they managed to play better than a specific set of opponents.

The randomness is extended by the fact that each of these squads played in the wildcard round, something that is supposed to be avoided at all costs.

It’s possible for any major leaguer to hit a few home runs in a limited stint. It doesn’t mean those figures can be extrapolated to…anything. Moustakas has four home runs in a 30 at-bat sample. That’s all that is going on here. In fact, it may even be something opposite of Mous becoming big-time. Perhaps pitchers grooved a few to him to avoid a walk because he was in fact so bad during the regular season. The home runs are not part of the explanation for why the Royals are here; they are part of the randomness.

Hudson had a very average regular season in his first as a member of the Giants. However, there were a couple of times where he struck out double-figure batters while walking no one combined in consecutive starts. In fact, he did it twice in the month of April alone. Hudson’s playoff outings are not part of the explanation for why the Giants are here; they are part of the randomness.

All that is not to say this is a bad thing. It just has to be understood. Baseball isn’t like other sports. A seven-game series is long enough to prove a true victor in most situations. In baseball? It’s just long enough to wonder who would actually be better if they played long enough to find out.

It’s true that playoff baseball feels random. The MLB season is very long and all teams go through streaks of winning and losing. The great teams each season keep the losing streaks short and the winning streaks long. Plus they learn how to win on the road. But labeling the postseason as random isn’t right; it doesn’t do playoff baseball justice.

A seven game series is in principle a small sample size. But you are giving no credit to Hudson for giving his very best at the most important time. Pitching at his current playoff level is an achievement. It has nothing to do with the regular season this year or the next, but I’ll be damned if it’s not a great accomplishment.

Why do we love Derek Jeter? Because he always got the clutch hit. He rose to the occasion and pushed his teams to greatness. That’s what playoff baseball is all about. That’s what makes it great, and that’s why the Royals and Giants are playing in the World Series.

The other great, great fact about post steroid era baseball is the return to parity. Sports writers complained for years of the lack of parity in Major League Baseball. They looked to the NFL and wanted their sport to have new winners and more hope season to season. The NBA doesn’t have this and the NHL only has a little, but baseball is now on par with the NFL in the parity department.

I think the parity in the NFL is overstated. Its guided by injury and luck and the lack of recognizing long term plans by general managers. In baseball we have long running success by franchises, but we also now have upstarts making postseason appearances. The Royals, A’s, and Pirates all made the playoffs this season. The Yankees and Red Sox did not.

I’m pretty sure I understand randomness, but outside of comparing regular season stats to playoff performance, I don’t see randomness at play in the Royals and Giants success. Did the Giants make the Cardinals poop the bed? Did the Royals make the Orioles bats go cold at the worst possible times? Capitalizing on your opponents miss steps is how good teams become great and win championships.

Bring on the World Series.