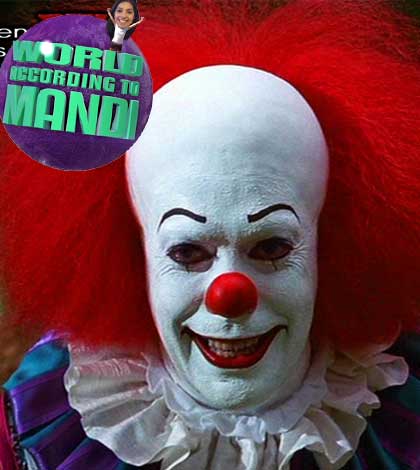 I love Horror movies! I love them so much that the mere moment I think about watching one, I’m scared. That’s right! And when I go see a horror movie in the theater, the moment the film starts I instantly question my decision to be there, out in public and scared as heck. More often than not, even if the movie isn’t super scary, I’m scared the whole time. I can’t help but give in; it’s so much fun! Only after the film ends can I recognize that it was me scaring myself. But that right there is the fun and anticipation of all horror films. It’s why I love them! This time of year, around Halloween, is my favorite time to watch them. Now for my all-time best horror movies!

The first horror movie I ever remember watching is one of the best ever. I was extremely young, less than five years old, and literally had nightmares about it until high school! It’s none other than Nightmare on Elm Street. To this day, I vividly remember the nightmare I had after first watching it! I was running through the film’s basement and hiding from Freddy Kruger over and over and over again. I ran through that basement, crawling under the pipes and being blinded by steam, more times than I care to remember. So scary! For a long time, just the thought of Freddy in the basement freaked me out. It wasn’t until years later that I got over it, when I re-watched the film with my man and he pointed out how campy the movie actually was! I insisted that it was dated and when seeing it years before it was petrifying. It really was! Nightmare on Elm Street is my top pick. I don’t care if it doesn’t hold up; the memory of Freddy sucking in Johnny Depp’s character and haunting these teens in their dreams will stay with me for a lifetime!

There is one horror movie that to this day I cannot re-watch. I loved it the first time I saw it, but it scared me to my core! My brothers and father would watch it EVERY time it was on TV, but the more I tried to watch it, the more I was scared. Finally one day I said enough; I would not watch it ever again! That movie is Poltergeist II: The Other, possibly the scariest sequel ever. The first Poltergeist definitely scared me, with the daughter Carol Anne at the center of the madness. But the second film went too far. They still want the daughter, but the beast shows up in the form of Reverend Kane, a man who’d killed many of his followers. When he first appears in the film he sings this song…OMG. “God is in his holy temple…” Just the mere mention of that song scares me to my core! My brothers loved singing that song to me just to freak me out. I couldn’t handle it! It was too creepy. Too much! I can’t EVER watch that movie again. But Poltergeist II: The Other is an all-time great horror movie.

This list could go on and on, there are so many amazing and scary horror films! But we are talking all-time best, and my final film is the original version of When a Stranger Calls. I first watched this film as a child, huddled under a blanket with my Dad. The opening of the film has stuck with me all these years later, so scary, and was the main reason I NEVER babysat growing up. A high school student tucks the children she’s babysitting for into bed and then starts receiving phone calls from a stranger. The stranger seems to be able to see her, and at the end of the conversation asks “Have you checked the children?” The babysitter freaks out and calls the police who tell her that the calls are coming from inside the house. YES! OMG! So creepy. The babysitter then finds the children all dead. The rest of the film takes place seven years later after the murderer escapes from a mental institute, but those first twenty minutes haunted me for years! It was one the most realistic horror film at the time and still an all-time best, When a Stranger Calls.

I’m scared just thinking about these three horror movies! They’re my all-time best, but I’ve watched tons of great horror movies that have scared the pants off me. Texas Chainsaw Massacre, Friday the 13th, and Childs Play round out my top six, but the list could go on and on. Whatever your fancy, indulge in horror films this Halloween season!