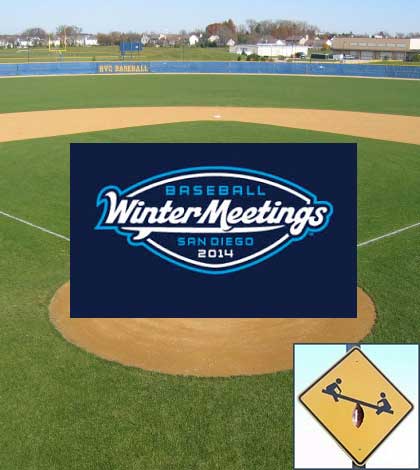 The MLB Winter Meetings have been a fan’s early Christmas present. Moves! Trades! Your team is now different and we all are winners. MLB sports debate.

The offseason baseball moves continue to come fast and furiously from the winter meetings; so fast in fact that they are hard to keep up with.

One moment, the White Sox look to be contenders; the next, Cincinnati is trading away a few major league assets. To me though, there were three main takeaways from everything that has transpired thus far, non-Dodgers division. The Dodgers are their own category. Perhaps we can discuss them in their own post since Los Angeles hasn’t been this busy since…well, that was a poor analogy. LA is always unbearably busy. But you get my point.

With moves continually coming in, here is where things stand.

1) Oakland doesn’t give a rat’s ass if anyone thought it was close enough to run things back next season. Billy Beane and company are blowing things up.

1a) Sucks to be an Athletics fan right about now, especially considering the weak returns they’ve gotten on a few trades.

2) The Cubs are really trying to end this whole World Series drought and seem to be going about it rather intelligently.

2a) It may not suck to be a Cubs fan for too much longer.

3) The Red Sox struck out big time with Jon Lester. They gambled and lost but moved on so quickly and smoothly that things might end up even better than expected. The pitching staff still lacks an ace and probably even a number two, but the moves to acquire Wade Miley, Rick Porcello and Justin Masterson build depth in the rotation for sure. If they’re willing to deal any of their young bats, the sky is the limit for this team next season.

3a) The only thing the Yankees fans had going for them (us) was potential Schadenfreude. Now, with the potential of a Cole Hamels trade looming, the Red Sox are one move away from full-blown juggernaut status. Along with the returning champs and the continual improvements of the Blue Jays, at least it won’t be lonely at the bottom of the AL East for the Tampa Bay Rays.

You never miss an opportunity to attempt sympathy for the New York Yankees and their fans. What you always seem to forget is that NO ONE outside of Yankees fans will EVER feel bad for our team and its fans. You also continue to ignore how quiet Brian Cashman has been and how many reports about the acquisition of Max Scherzer have been floating around.

At this point I fully expect Scherzer to be a Yankee, if not by the time this column posts, then by the end of the weekend. There have been far too many articles, reports, and lack of communication from the Yankees themselves, for this not to fall their way. I recognize the possibility of outside monetary influences swinging things foul, but all things currently point to Scherzer wearing pinstripes. Does this change your bottom feeder mentality?

I get it, you expect the Yankees to tread water throughout the 2015 season. You see similar trends in Oakland, with quite the opposite happening for the Cubs and Red Sox. All of this leaves you grasping at straws as your team has done little so far. Well how about Major League Baseball making major headlines for an entire week? I’m chock full of excitement, but only the sheer quantity of moves surprises me, not the teams involved.

For a sport that loves statistics, patterns, and trends, the baseball media sure finds it easy to ignore them when it comes to General Manager decisions and player movement. And so have you. My take aways are far more exciting, as yours seem to have ignored the fact that what Oakland, the Cubs and Theo Epstein, and the Red Sox have done were predictable based on their prior actions.

1) Theo Epstein is the man.

1a) The Boston Red Sox managed to replace him with someone equally deserving of the title of ‘The Man.’

2) The Cincinnati Reds traded away pitchers, in some odd turn of events where they decided to ignore the fact that MLB is now a pitcher’s league.

3) The Marlins are hoping to go for broke once again, in similar fashion to how they won a World Series many years ago. They smell a weakening division and hope to pounce.

4) The New York Yankees have been eerily quite. A little too quiet if you ask me. Uncharacteristically quiet. This should scare the rest of baseball.