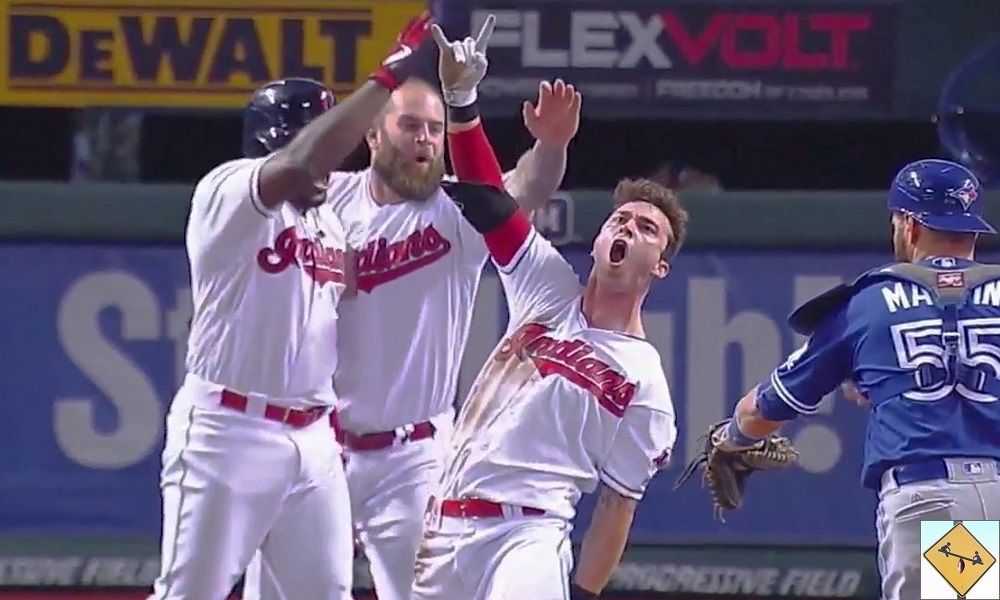 A massive MLB winning streak by the Cleveland Indians is being rivaled by an equally impressive losing streak by the Los Angeles Dodgers. Momentum is reshaping the MLB playoffs in crazy ways!

The Los Angeles Dodgers have lost 10 consecutive games. The Cleveland Indians have won 18 consecutive games. In a sport where teams usually aim to win two of three contests to take home a series victory, streaks like this (on both ends) are incredibly abnormal. The fact that the former is coming from the supposed best team in the league is astounding.

Where do you stand on the momentum of a baseball season impacting the playoffs? Because of wildcard spots, getting in gives anyone a chance to catch fire and make a run. The reason the regular season is so long is because it takes quite a long while for baseball performance to normalize into expected outcomes. Three rounds of the postseason is not long enough to determine the same thing. The “best” team doesn’t always win.

Does that mean the Dodgers are screwed? They are heading full steam toward the playoffs as the coldest team in the sport. Clayton Kershaw has returned from the disabled list and actually had a bad start. A few weeks ago, we thought Los Angeles could challenge the all-time record for wins. Now they might struggle to get to 100.

ALSO ON BUZZCHOMP: Keep Going No Matter What, Fitness Motivation

Considering the other talent at the top of the National League, I am officially worried about LA. But it’s not like I would consider them the likeliest team to get bounced. It’s just that I now consider them no better of a bet than any other squad. Their losing streak has normalized expectations.

In the AL, I feel the same way. Cleveland is as hot as can be, but it doesn’t mean they are a shoe-in to win the pennant. It just means Houston isn’t. Baseball is too fluky to take mid-September action as a sign of mid-October results. This stuff certainly means more than the Indians’ performance in May did, but it still doesn’t mean enough. After all, momentum is only as powerful as the next day’s starting pitcher.

Not only have the Dodgers lost 10 straight games, but Los Angeles has in fact lost 15 of their last 16 games, only winning twice since recording their 90th victory of the season. I wouldn’t blame the Dodgers for packing it in after hitting the mark, yet their 90th win came on August 24th with over a month of the season still to play. They won the next night, before embarking on a losing streak that can only be interpreted one way. The National League is officially wide open!

Momentum is huge for playoff baseball. September is the most important month of the season, despite the fact that most of the division races were basically wrapped up as August came to a close. The Dodgers likely start winning again with multiple series against San Francisco, yet the team also plays Washington and Colorado. I’m officially worried about the Dodgers. No matter which team they face in the playoffs, Los Angeles is going to have less confidence and bigger expectations. There are still a few weeks remaining for them to reverse this trend, but winning in September is paramount. We’ve seen teams come from nowhere to steal a wildcard spot and take that momentum to a pennant and into the World Series. Teams playing otherwise are doomed to be eliminated.

Cleveland presents the opposite argument with their MLB winning streak. The Indians are playing scary good baseball and have me concerned as a Yankees fan. Houston is no longer the juggernaut in the AL, because the Indians are hotter than hot. Cleveland last lost a day before the Dodgers won their 90th game, way back on August 23rd. Besides sweeping the Yankees, the Indians have not defeated anyone of note. Yet their momentum is real and their remaining schedule is just as easy. Several wildcard teams will face Cleveland before the end of the month, but none are truly threats to this team’s mojo.

Arizona is 8-2 over its last ten games. The Yankees and Nationals are both 7-3 over their last ten games. Houston has lost four straight and the Cubs are barely keeping it together. The MLB playoffs feel straight forward, with two giants in each league, but we can’t rule out momentum. Los Angeles better get its house in order, otherwise it will be Arizona or Colorado who face the Nationals for the pennant. Sorry not sorry Chicago. Houston and Boston must find some consistency, because Cleveland appears unstoppable and the Yankees are scary unpredictable. I’m not sure there is much to watch for as the season ends, but the playoffs are going to be incredible because of one huge MLB winning streak and another amazing losing streak.