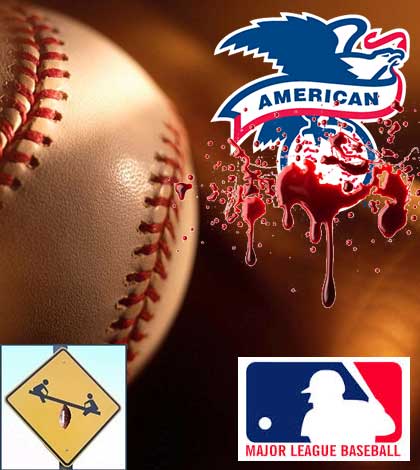 [Part one – MLB Halftime in the AL]

If the first half in the AL has been a lackluster mush of losing teams and new stars breaking through, the second half is ONLY going to be about the playoffs. The division races are not particularly close and outside of the AL East, won’t be much to watch.

I see a real dogfight in the AL East between the Orioles, Blue Jays, and Yankees. It’s no guarantee that second place in the division will yield a wildcard berth. But I think the Yankees find a way to steal a spot, a wildcard spot. Sorry Baltimore, but the Blue Jays finally find that success the media has been predicting for years. They pull off the division win.

Detroit wins the AL Central and Kansas City falls back to the pack, out of wildcard contention. Moving on.

The AL West is where the power teams reside this season in the American League. The Angels will pull ahead to win the division, but not by much. Oakland grabs the top wildcard spot pretty easily, leaving the Mariners to compete with Baltimore and New York for the final card. I’ve already given it to the Yankees, so no. Robinson Cano will not find himself on a playoff team this season. That doesn’t mean it won’t be close, but he’ll be at home this October.

My player to watch in the AL heading forward is the same guy you should have been watching in the first half of the season. Mike Trout. Mike Trout. Remember that name. He will win a triple crown one year. He is that good. I don’t know if LA is ready for a deep playoff run, but it will be on Trout’s back if they are able to down Detroit.

Unfortunately, I do not share your baseless optimism in regards to the New York Yankees. Even after some good trades for small pieces, I don’t see how the Yankees manage to grab a playoff spot this season. They have one of the worst run differentials in the entire American League. The AL East’s playoff spot, the division is certainly only getting one bid this season, is far from a lock for anyone else though.

I still can’t count out Boston or Tampa Bay. To be honest, I like Tampa Bay better than either Baltimore or Toronto, but the Rays may have dug themselves too big of a hole prior to the All-Star break. Because of that, I actually agree with you that the Orioles lose this lead, and the Blue Jays work their way into the playoffs.

Edwin Encarnacion should be back in August; that will help elevate the entire offense in Toronto. If they make a trade for one impactful starting pitcher, it’s a lock. Toronto will be playing in October.

The rest of the AL isn’t nearly as exciting. I agree with you in that I don’t see how Detroit doesn’t win the Central. Even with their shaky ace pitching, they’ve already built a sizable lead on the rest of the division. If Miguel Cabrera starts hitting for power again and Verlander throws like even an above-average starting pitcher, this is a runaway.

Out West things are more interesting, just because that’s where all the best teams are currently playing. Oakland and Los Angeles are almost already locks for postseason play. Again, I agree with you (what the hell??) that the Angels will slide just ahead of the Athletics for the division title and the right to avoid the wildcard play-ins. Alternatively though, I have both wildcards coming from the West. Seattle gets in. The Mariners are just a better ball club than those posers in the East.

First, Seattle has legitimately elite starting pitching with Felix Hernandez and Hisashi Iwakuma. Although the offense has produced poorly, it’s partly because of the ballpark and partly because of the roster construction. There aren’t many quality bats on this club outside of Cano and Kyle Seager.

…Actually, there isn’t a single other quality bat on this club. Good thing they win with speed.

…Well, only James Jones runs for them, and he’s a no-name rookie with a putrid .638 OPS.

I talked myself out of it. This team isn’t any good after its top four players! Hell, Fernando Rodney is probably Seattle’s fifth-best player. What an outrage. The second wildcard goes back to Baltimore. Now let’s move on. The AL is secretly weak and depressing. Eight of the top twelve teams in baseball are probably in the National League right now.

[If you missed Part one – MLB Halftime in the AL]