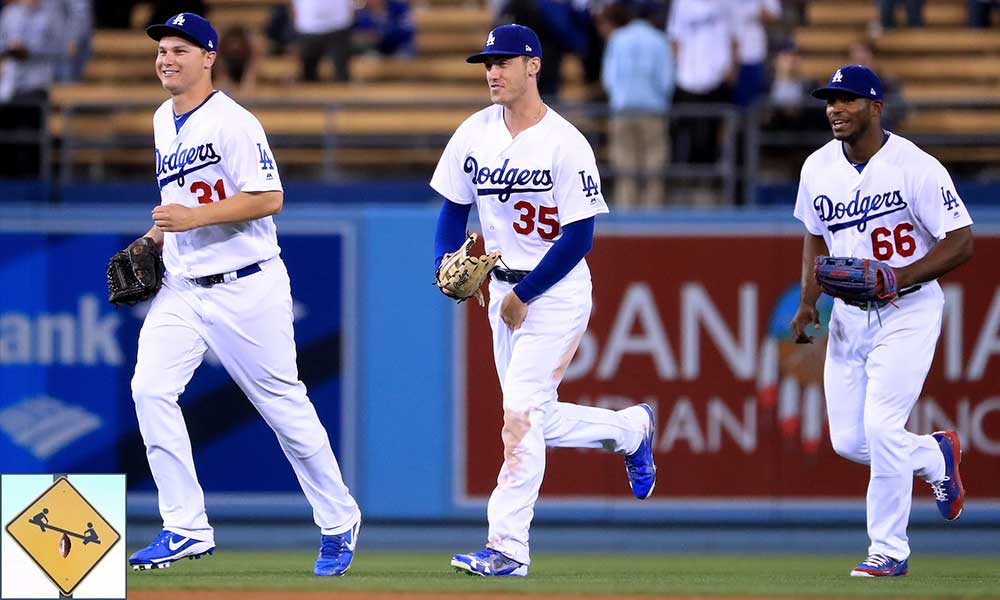 The top 3 teams in the National League feel like a sure thing, but nothing ever is. Who will unseat the Nationals, Cubs, or Dodgers this season? Your MLB Predictions 2018.

MLB Opening Day always feels overly important even though, from a technical standpoint, it is one of the least important games of the year. For that matter, the entire opening series of a season is pretty suspect. Teams are getting their rosters set, placing and removing guys from the disabled list seemingly every 12 hours. A Clayton Kershaw-led Dodgers team lost to Ty Blach and the San Francisco Giants for god’s sake! We can’t put much stock into March baseball.

As for the National League at large, do you see any reason to trip up the top three division winners we had a season ago? Before we get to projecting wildcard contenders – because that could actually be interesting – what would it take to dethrone any of the Washington Nationals, Chicago Cubs, or Los Angeles Dodgers?

All three squads were given over/under win totals of above 92. No other NL squads are even expected to win 86 times this season. It’s a pretty close approximation of the AL leaders…if the Boston Red Sox didn’t field a squad this season. That is the gap that exists between the top trio and everyone else in the NL. So who trips up, if anyone? Last year, it was no one, though the Cubs tried their best. This year, one could be the most worried about the Cubs again, though that’s just a matter of degree. Chicago is probably worse on the mound, though not noticeably. They are also losing some of their quality depth through age regression, as Ben Zobrist and Jason Heyward are no longer everyday players. But young guys are still improving around the stalwarts. Ian Happ and Willson Contreras may become stars of their own in 2018.

I’m worried about the Dodgers’ own depth holding up. After Kershaw, the rotation is a who’s-who of DL inhabitants. The offense is a bat short without Justin Turner too. I’m not worried enough to expect them to fail to win the NL West, but I would take the under 96.5 wins. As for Washington, I’m actually most confident about it. The offense should be great and is deep enough to hold tough until Daniel Murphy comes back. The rotation is arguably one of the best in the business. If anything is going to cut down the Nationals, it would be their bullpen, but even that looks improved from last season.

I guess that was a long way of saying I’m not overly high on this trio as compared with 2017, but I expect all three members to win their respective divisions regardless. What are your MLB Predictions 2018?

The Cubs certainly looked vulnerable last season, yet the team still got it together just in time for the playoffs. Los Angeles had some serious competition in the NL West last year, yet remained games ahead the entire time. Washington was also far and way better, but showed its weakness in the postseason. For one these teams to topple out of first place in their respective divisions, we need the appearance of this season’s Minnesota Twins, a team that has everything go right and vastly exceeds expectations.

We jumped on a few American League bandwagons last month in our first round of MLB Predictions 2018 as we picked which teams might pull off what the Twins accomplished last season. Yet the National League is definitely more top-heavy. The AL has more top teams, but the separation in the NL feels greater. Once again the NL Central and NL West have the most opportunity for mid-tier success. The likes of Arizona, Colorado, St. Louis and Milwaukee can all take the necessary leap up the standings in order to unseat their division’s title holder. Having it actually happen is another thing entirely. Let us not forget the San Francisco Giants either, because that team seems to flip-flop between great and below-average season after season. Last year the Giants were bad. Is a complete flip in order?

MORE BUZZCHOMP: Are We Witnessing Best NCAA Tournament Ever?

I’m removing the Nationals from this discussion because I do not believe anyone in the NL East is good enough to knock them off. Perhaps the Mets will be a playoff team in 2018, that can certainly happen, but they are full five games worse than Washington no matter what happens. I’m also not particularly confident in either the Cardinals or Brewers. That means Chicago is safe in the NL Central, despite being the weakest of our three top teams on paper. The NL West might be the best division in all of baseball 2018. That leaves the Dodgers vulnerable.

Los Angeles will return to the playoffs, but it may be as a wildcard team. I like who the Giants added in the offseason. Their pitching is a bit suspect right now, but starting back in 2010 with their World Series victory, San Francisco has gone every other season making or missing the playoffs. They won the World Series in 2010, then missed the playoffs in 2011. They won the World Series again in 2012 and then again in 2014. The Giants made the playoffs in 2016 as well. Even years appear to appeal to this team, so consider me bought in for 2018. If San Francisco doesn’t pull things off, Arizona certainly can once again. The bottom line is that the Dodgers have stiff competition in the NL West. We saw them lose with Kershaw on the mound to open the season. They are the most vulnerable to fall from their division throne this year.