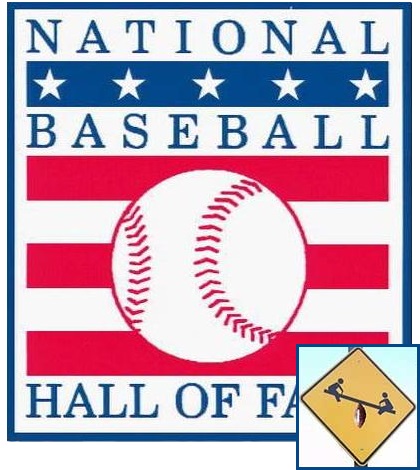 The MLB Hall of Fame 2015 class of inductees is an outstanding group of four measly players, and its considered a LARGE class. Something is terribly wrong here. Only ten votes per ballot and someone had the balls to leave off Pedro Martinez. What’s going on?

Another January means another vote has come in from the Baseball Writers’ Association of America for the MLB Hall of Fame.

Another vote from the BWAA also means another round of inexplicable picks and non-picks, culminating in everyone’s favorite pastime: ragging on the MLB Hall of Fame vote!

I for one can’t get enough.

Let’s start with the juicy, idiotic details. There were 549 voters (one person, ESPN’s Buster Olney, abstained from voting because even he agrees this is too messed up to continue as is).

Somehow, 15 people did not think Randy Johnson was worthy of the Hall, and 49 people thought Pedro Martinez should fall short of admission.

There was at least one person’s ballot floating around Twitter this past week who did not vote for either man. His argument was there were other players who needed his vote more. He was right, neither guy needed his vote, but how screwed up is the system when people need to not vote for the best guys to give their other choices a chance?

Speaking of other choices, not enough people had votes left for Carlos Delgado, and the first baseman fell short of the threshold to remain on the ballot in coming years. He wasn’t a Hall of Fame player, but he certainly deserved more than one year of voting to prove it.

And yet, other voters still had room left to make the following classic picks:

One vote for Darin Erstad.
Two votes for Tom Gordon.
Two votes for Aaron F’ing Boone.
An amazing 30 votes for Nomar Garciaparra. Not even Boston fans think Nomar was a Hall of Famer!

On the positive side, I think John Smoltz was deserving of his admission, but was he really any better than Curt Schilling (who got only 39.2 percent)?

It was nice that Craig Biggio got in I supposed, but wasn’t his teammate Jeff Bagwell (55.7 percent) the much better player?

Really nothing with the MLB Hall of Fame makes a lick of sense, but the results still surprise me each and every year.

What bothers me about the MLB Hall of Fame 2015 class is that its being considered a large class of inductees, when only four men were selected. If a player is deserving of entry, he should be elected. If a player has not earned the honor, he belongs on the outside. Everything else is just pomp and circumstance.

In a sport that covets numbers above all else, baseball seems to forget them when it comes time to vote for the Hall of Fame. This perplexes me. Requiring seventy-five percent of voters to induct a player is well and good, but limiting one’s ballot to ten names makes the entire system absurd. It practically guarantees homerism and a small inductee class. It guarantees controversy, great for headlines, but also ensures eligible candidates do not get voted in.

Stating that Barry Bonds and Roger Clemens deserve entry is nothing new. Their numbers support their induction, although other factors keep them out. However, there are a solid five players who could have / should have been inducted into the HOF by now, if not this season.

Mike Piazza, Jeff Bagwell, Curt Schilling, Edgar Martinez, and Jeff Kent will all be MLB Hall of Famers one day. Whether excelling at their position, or owning the league for stretches of their career, these players do not need to sit on the ballot for years to come. Elect them already. Here’s the FULL LIST of voting for the MLB Hall of Fame 2015.

While one and done situations like Carlos Delgado are sad, you correctly noted that he was not a hall of fame player. Similarly is the case of Don Mattingly, who after fifteen years on the ballot will not be returning next year. He had an excellent career on a bad team. We can leave it at that.

It seems like the system is set up to give everyone their day in the sun. Randy Johnson, Pedro Martinez, John Smoltz, and Craig Biggio all deserve theirs. They all earned their place in Cooperstown. Hopefully next season we will see four more men inducted into the MLB Hall of Fame. Because on my count, there are at least seven more on this year’s ballot deserving of entry.


Photos courtesy of mlbreports.com and MLB.com