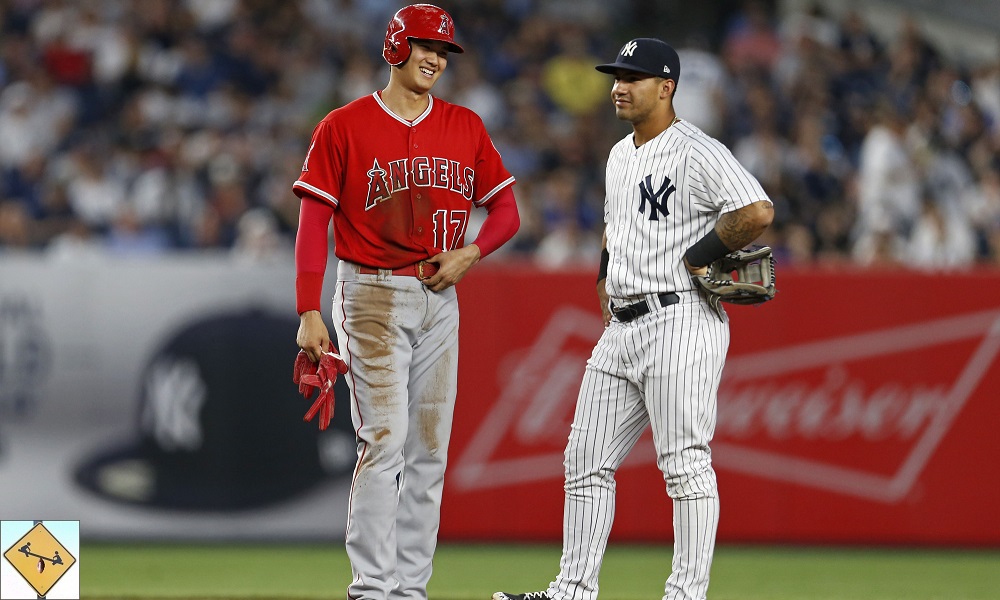 A lot has changed since early August when it appeared the MLB Awards 2018 were locked up. The races for MVP, ROY, and Cy Young are muddled beyond belief, so we aim to clear up the mess. Your MLB sports debate.

I have to disagree with a number of your MLB awards 2018 takes from the end of August. You called the AL MVP for J.D. Martinez, and I just don’t see it. I wouldn’t even vote him the MVP of his own team! Granted, that statement is purposely misleading because his teammate is also a leading MVP candidate. But where Martinez excels in one aspect of the game, the likes of Mookie Betts, Jose Ramirez, and Mike Trout excel in all three aspects of baseball. They are excellent base runners and defenders. Martinez is not the former and doesn’t even play defense. Taking a look at the Fangraphs WAR leaderboard, Martinez is the only player in the top 20 to be a negative on the base paths. He also loses the most defensive value for obvious reasons. And he isn’t even clearly the best hitter. I don’t have a winner yet, but the point is, the award is hardly decided.

I can’t back you on Miguel Andujar’s sewn up AL Rookie of the Year either. Thanks to the return of Shohei Ohtani to the mound (although he exited his start early again), the re-getting hot of Gleyber Torres, and the truly awful defense Andujar has played at the hot corner, this remains a three-man race in the final month.

ALSO ON BUZZCHOMP: Learn To Lie Like Donald Trump, Its Science!

In fairness, it also seems like calling the AL Cy Young for Chris Sale was premature. He hasn’t pitched since I said something. Though I don’t see anyone who has clearly overtaken him at this point, the award is hardly wrapped up if he doesn’t even reach 160 innings by season’s end. I wrote off Trevor Bauer because he wasn’t going to take the field again, but Bauer already has a 20-inning lead on Sale. Justin Verlander and Corey Kluber could finish 50 or 60 innings ahead of Sale. I can’t bring myself to ever vote a reliever for the Cy Young because they are out there so little, so the same argument should knock Sale. I don’t agree that wins particularly matter, but being available and in there certainly does.

One award we haven’t mentioned at all yet is the NL MVP. The reason it has been ignored is because there are hardly any clear contenders, let alone a clear winner. All four of the AL MVP candidates are superior options to anyone in the NL right now. Let’s handicap the final month for NL MVP and see who might capture the prestigious trophy.

After dual horrible starts to the season, both Matt Carpenter and Paul Goldschmidt are in the running. Both have been spectacular for a long while now, but I find it hard to rationalize giving an MVP to a player who was actually costing his team games for a month of the season. It’s the same argument that gave the AL award to Jose Altuve instead of Aaron Judge last year. Judge sucked for such an extended period that it should matter even if the end results are still incredibly good. The next players leading in NL batter WAR are a weird collection. Javy Baez, Lorenzo Cain, and Christian Yelich aren’t big names. Yelich is known for simply being very solid, which is not something you want out of an MVP. Cain is a base runner and defensive extraordinaire whose hitting comes second. And Baez is known for fancy tags, not walking ever, and being outrageously streaky. It just so happens that he has had a five-month hot streak.

Still, I put Baez as the leader right now. The reason I would downgrade him isn’t fair and shouldn’t factor into the award voting. I would downgrade Baez because I don’t think he’s actually this good or consistent of a hitter. But that ignores the fact that, at least for this 2018 season, he has been! If his hot streak branched from the middle of last year to early this year, no one would have batted an eye. But timing does matter. He was bad in May but has been pretty great in every other month. He is a versatile and tremendous defender to boot. And then there’s the possibility that he is actually just this good now. Baez is still a young and growing player. Other guys have matured from less into more. The horrible walk rate gives him a rather low on-base percentage for an MVP, but thanks to a .300 batting average, his .330 OBP is tolerable. And it helps that the dude leads the NL in slugging.

On the pitching side, the likes of Max Scherzer and Jacob deGrom have been elite. DeGrom is having a historic season, but it’s not historic in his output as much as his teammates’ ineptitude. He has now thrown 25 straight starts allowing three or fewer runs, tying an MLB record. Of course, in that 25th straight performance he once again didn’t qualify for a win. He has also pitched a franchise-record 20 straight quality starts yet has just eight victories in total. In some ways, it’s reminiscent of Clayton Kershaw’s 2014, when his ERA ended half a run better than any other pitcher in his league. By the way, Kershaw won the MVP that season.

We’re lucky the MLB Awards 2018 are all still up for debate, because the playoff races are far less interesting in all but two divisions. I can admit when I’m wrong and it appears I jumped the gun in early August. The AL MVP is pretty much locked up, but for Mookie Betts and not his teammate. Martinez cooled a little and Betts keeps on rolling. The award is his to lose at this point.

Don’t be so coy about AL Cy Young, because Sale is still in the driver’s seat. As long as he returns to the mound for an additional start or two and doesn’t crap the bed, he is likely going to win the award. It’s rather fitting that both AL MVP and Cy Young go to members of the Boston Red Sox. That team is winning at a historic pace. As for AL Rookie of the Year, it’s certainly less clear than it was a month ago. My gut says one of the Yankees get it, but I no longer know who. New York is playing for the postseason. The Angels are not, plus Ohtani may opt for surgery sooner than later. Keep on eye on this race, because it’s too close to call.

Things are even more competitive in the National League. I thought we had some sure things in August, but that is no longer the case. How can anyone pick an NL Cy Young winner right now? None of the three top guys are leading their teams to the playoffs. All have suffered from weak run support. I’d like to see Aaron Nola win the award, because its someone new for an upstart Phillies team. But it will be hard for him to top Scherzer or deGrom unless he is able to pad his stats over his final few starts.

I have no idea who will win NL Rookie of the Year, so I’m going to skip right to the NL MVP award. Every player in this race is also pushing his respective team towards the postseason. Yet most of them will miss the playoffs, because they are all competing for the same spots. Right now I’m following Nolan Arenado closely, because he has helped vault the Rockies atop the NL West. If they can hold onto that playoff spot, beating out the Dodgers and Diamondbacks, that gives him major points. It also hurts Goldschmidt significantly. The players who get their teams into the playoffs will be the ones left standing for this award. Yelich, Baez and Arenado are trending that way now, but I don’t see a clear leader.