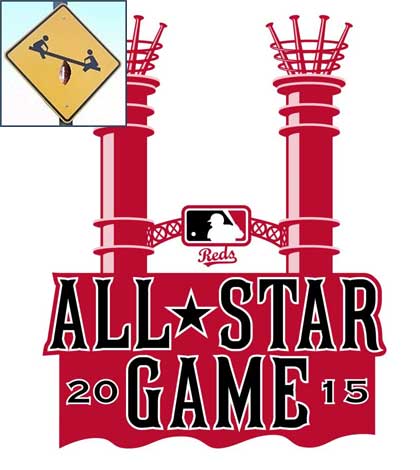 MLB All-star voting no longer matters, as Kansas City Royals fans make a mockery of the word All-star. Should the game be for the fans and by the fans, or a true group of MLB All-stars playing to win? Baseball must choose and stop throwing out millions of diehard fan votes.

MLB All-star voting has always been in the hands of fans, with team managers selecting the final few roster spots. The difference in 2015 is that Kansas City Royals fans have managed to organize in a big way, steamrolling all voting throughout the entire country and securing 8 of 9 starting all-star spots for Royals’ players.

Currently the American League All-star team consists of Mike Trout and the Kansas City Royals. That is the extent of the starting line-up and Major League Baseball is investigating for fraud. By all accounts the Royals’ fans have honestly voted, and voted their guys to the top of every category. This is certainly unprecedented.

With fraud as the prime culprit, MLB has nullified nearly 60 million All-star votes, all from Royals’ fans I presume. Yet the current ballots still have the Royals winning every starting spot but Mike Trout’s.

How do you feel about this? I’m firmly against ballot stuffing. I believe in voting once and moving on. If everyone votes once, then a true determination of a favorite will win. Yet there is no rule against multiple votes. Hell, its pretty much encouraged.

Fraud is one thing, but are you in favor of rallying votes to get your team’s players into the All-star game? Do you want to take the voting out of the hands of the fans?

The MLB All-star game is supposed to showcase the league’s best players that season. Old favorites get in as well, but the top talent has earned All-star status. This Royals romp makes a mockery of the entire game. For a sport that cherishes its records and awards, what happens now?

Mike Trout and the Kansas City Royals are AL All-stars

First off, I love what is happening in Kansas City because the MLB All-Star game is a flawed piece of entertainment that needed a revamp in one direction or the other. This disturbance was the perfect thing to get the ball rolling. It’s making a mockery of something that was already a mockery in execution.

Either a) this All-Star game is an exhibition and the result doesn’t matter. If that is the case, let fans vote for whomever they want as many times as they want. Give each team a player, give career-achievement inductions, etc. You can have all your silly rules. It doesn’t matter beyond getting fans on board and involved.

Or if b) the All-Star game is a conglomeration of the league’s top players meant to determine home-field in the World Series, then you can’t have any of this junk. Fans can’t vote for something so important; fans are idiots. The best players shouldn’t be starting, they should be finishing games. Each team shouldn’t have a player if they don’t have anyone deserving. It’s all common sense stuff if the game counts.

This juxtaposition has been in place for years though, and nothing has been done about it. The 2015 Royals fans are the first group to throw a monkey wrench into that. You’re right, we don’t know if anything nefarious was actually done, but that doesn’t even matter at this point. The action was enough. So perhaps MLB will institute a safe check for crazy fan nominations or it will do away with the fan voting altogether. I don’t have a problem with either move. The bottom line is the game itself is still flawed so any move to fix a voting problem doesn’t address the game problem.

Your idea to limit everyone to one vote misses the point. That will mean the teams with the largest fan bases will always grab all the starters. How is that any better? Again, either this is a real game with implications and biased (read: stupid) fans should be taken out of the process, or the game is a fan exhibition and crazy stuff like this all-Royals lineup should happen more often. It all depends on what MLB wants, but it can’t have both.