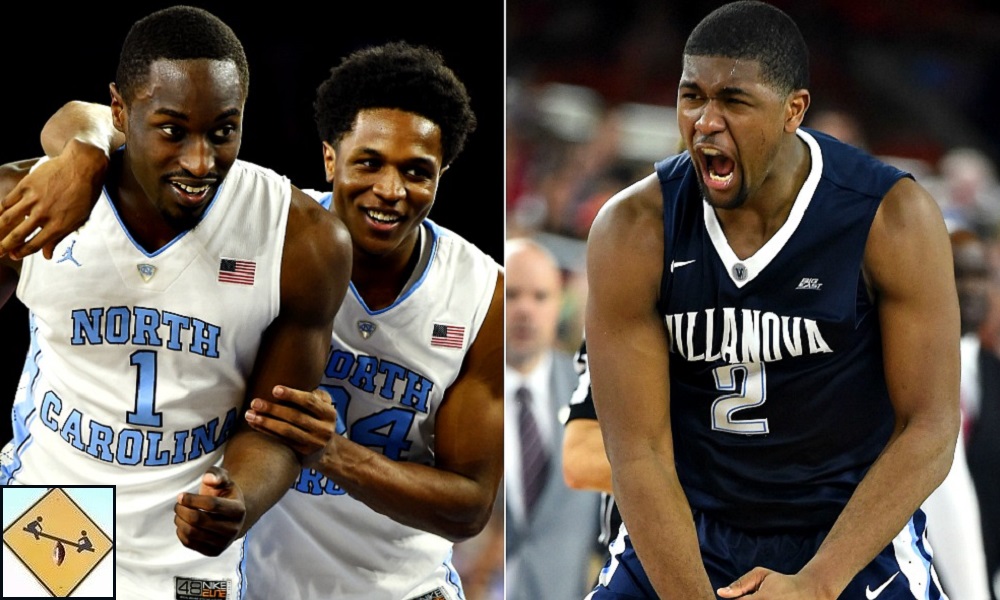 Forget statistics and matchups, the winner of the NCAA Finals comes down to practice. Whose habits are stronger, North Carolina or Villanova? March Madness 2016 is won by kissing the court.

Tonight is the 2016 NCAA Tournament National Championship game between the North Carolina Tar Heels and the Villanova Wildcats. To determine a winner or handicap the matchup, most websites would go into how the teams will compare during the game, i.e. coaching, lineups, style of play, etc. What good is that going to do?! This is a one-game, winner-takes-all battle for the title. To know how someone will fair in such an environment, the best way is to judge how they practice. In practice is where teams put in the most work to get better and excel at their highest level. As the old saying goes, practice hard so the games are easy…or something of that nature.

With that, I have here for you two photos of practices; one of the North Carolina Heels and the other of the Nova Wildcats. Using your keen eye, tell me which team you think has the edge in tonight’s game based on how each team goes about its practice. Do you like the Tar Heels, who seem to get around scoring slumps by using more and more basketballs? Or do you like Villanova, who relies on coaxing and seducing the very court itself? Each team’s strategy is sound. It is up to you to determine a winner.

Ah, the age-old question of more basketballs versus court courtship. Regardless of their methods, practice is certainly the reason both UNC and Villanova are playing in the NCAA Final, having decimated their Final Four opponents. I can’t say I didn’t see this coming, because I did see this coming. Congratulations are in order for myself. I correctly predicted this Finals matchup, winning our family bracket challenge which really should come with a cash prize. We suck.

Back to the action on the court and some practice analyzation. Determining the winner of the 2016 NCAA Finals is rather simple, yet profound. We already know Villanova is great at shooting the basketball, while the Tar Heels are excellent at rebounding and second chance points. These two facts resonate through our practice photos. North Carolina works incessantly to get as many balls into the hoop as possible. Yet there is only one basketball on the court during a real game. This severely limits the gains from practicing with ten balls. Perhaps if two or three basketballs could be used, UNC would have the advantage. But with one ball, their practice habits fall short.

The ultimate sacrifice in sports is made to the playing surface. Players give up their blood, sweat and tears to the basketball court during games. So what’s the best way to practice? To whom do the players owe their success? What entity is responsible for the bounce of the ball, the twist of an ankle, or the elevation of a jump shot? The court! Practice would not be complete without honoring such a huge part of the game. Personally I’d rather give the playing surface a giant hug, but its pretty impossible to wrap your arms around the entire court. This is why Villanova chose the kiss. Kissing the court ensures a balanced relationship built on love, trust and respect. It ensures a lasting bond necessary for success. It places care and compassion upon an otherwise hard and misunderstood entity. Thank you Villanova for reminding us that everything should be sealed with a kiss.

It pains me to pick Villanova in this game, but their practice habits are simply superior. I selected the Tar Heels in our bracket challenge, but I win the pool regardless of who wins this game. Therefore I can safely set aside my heart and pick with my head. Honoring the playing surface trumps a gross misuse of basketballs. Villanova tops North Carolina.

Photo Credits: @bigeastmbb on Twitter, Todd Salem live at the tournament, and campusinsiders.com