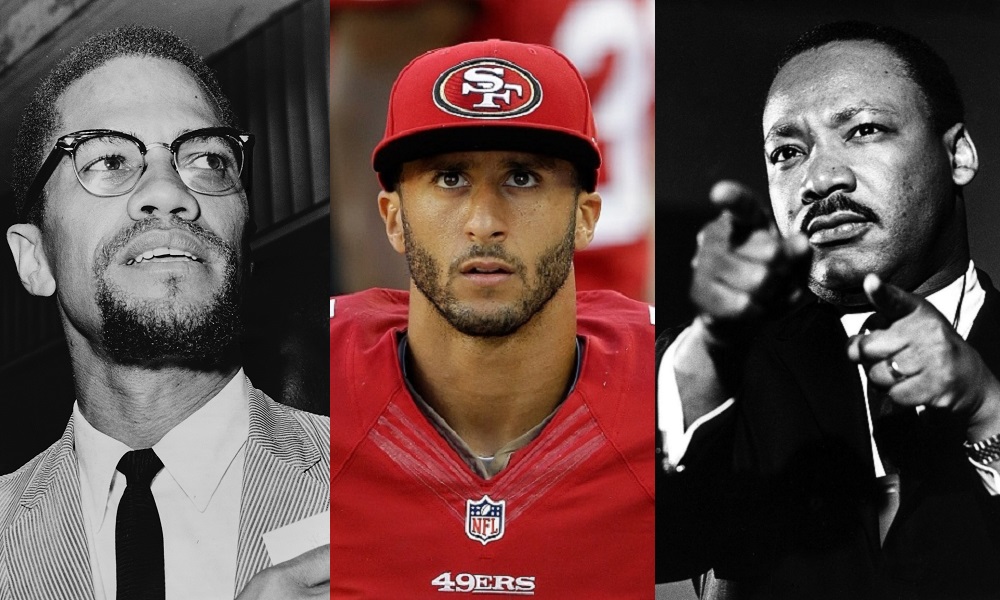 To quote a man is to capture history in a bottle, but what happens when history goes unchanged? Malcolm X and Martin Luther King Jr. fought for the same things Colin Kaepernick is now fighting for. Their words are nearly interchangeable and its no coincidence.

This past weekend, San Francisco 49ers quarterback Colin Kaepernick made news by refusing to stand for the national anthem in an attempt to shed more light on the oppression of people of color in America. He said he will continue to sit until something changes in the culture where “there’s a lot of things that need to change…There’s people being murdered unjustly and not being held accountable. People are being given paid leave for killing people. That’s not right.”

No matter how you feel about Kaepernick’s decision, it is pretty eerie how the political landscape of today still mirrors times in this country that took place so long ago. Some will look at this as no progress being made at all.

ALSO ON BUZZCHOMP: The Future of USA Basketball

The following are quotes said by Kaepernick this weekend. The others are quotes from black leaders and icons throughout history: Malcolm X, Medgar Evers and Martin Luther King Jr. See if you can spot the Kaep quotes versus the others. It’s harder than you think, which speaks to the point the quarterback is trying to make, as well as the situation we, as a country, still find ourselves in.

“If you don’t stand for something, you will fall for anything.”

“I’m going to continue to stand with the people that are being oppressed. To me, this is something that has to change.”

“Not really too concerned about [my safety]. At the end of the day, if something happens, that’s only proving my point.”

“Injustice anywhere is a threat to justice everywhere.”

“This country stands for freedom, liberty and justice for all. And it’s not happening for all right now.”

I think I know which polarizing figure to attribute these quotes to, but to slap names on these words would simply undermine the importance of each statement. It’s not who said it, but the truth of their statements that matter. It’s not what they did to make a difference, but the fact that each man did something to fight for what’s right.

Many people are chastising Kaepernick for not standing during the national anthem. I can’t think of a better and more polarizing form of protest in a time where something needs to change. Kaep made it clear what his message was, as did Malcolm X, Medgar Evers and Martin Luther King Jr. One must stand up in the face of oppression. One must not tolerate a world full of violence gone unpunished. One must not tolerate injustice, oppression, or a continued apathy towards such things. I commend Kaepernick for deciding enough is enough. I commend him for choosing a non-violent form or protest and for making people pick sides. We can’t ignore the conversation any longer.

There is no immediate solution to our country’s problem with violence and race. That is made painfully obvious by the fact that the issues Malcolm X and MLK dealt with are much the same as those we are dealing with today. They are the same issues Colin Kaepernick has addressed, in his own way as a professional athlete. He stands upon a pulpit that most other people do not have. He is in a position to garner national attention and has done so. It’s understandable that some people disagree with his actions, but that is the entire point of protest. If everyone agreed with what he did, then it wouldn’t be a protest, now would it? Arguing with what he is protesting against is pretty ridiculous, so he chose a form of protest that is extremely polarizing and has incited debate. Regardless of how you feel about his actions, you can’t argue with the statement being made.

I realize how personal many Americans take the national anthem and how sacred our flag is to them. But I wonder if the outrage would be quite the same if Tom Brady had made this statement. Or if it was Beyoncé or Harrison Ford. Many people already disliked Kaepernick. Most people like Tom Brady the person, as well as Beyoncé and Ford. If they had made such a protest, would those same people be outraged? Or would they be swayed to the real issue at hand?

My hope is that more public figures make public statements of protest until we reach a tipping point. If enough well-respected individuals refuse to stand idly by as nothing happens to change the problems facing our country, then change will be forced upon us. Change will become the desire, instead of something to be feared. I for one am hoping for some change.