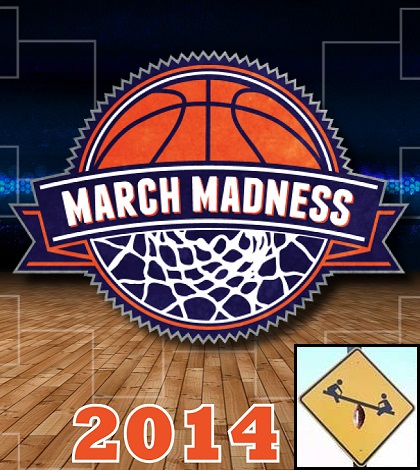 It sucks to be a member of the American Athletic Conference. The newly formed AAC didn’t garner much respect during the season and it sure didn’t grab any from the NCAA Tournament committee when the bracket was released either.

The conference champion Louisville Cardinals were under-seeded as a four seed. Cincinnati (5 seed), Connecticut (7 seed) and Memphis (8) all got a pretty raw deal as well. But to top it all off, the SMU Mustangs, who were ranked in the final AP poll of the regular season, didn’t even make the tournament at all.

That being said, I don’t think the lower seeds hurt all of the AAC schools that did make it. I like the Louisville Cardinals to win the Midwest region and make the Final Four.

Everyone is marking the Midwest as the toughest region yet Louisville seems like the best team there. And I feel the same way about another under-seeded four seed: the Michigan State Spartans. I like them to win the East region over the likes of Virginia or Villanova.

In the South and West, I felt less comfortable about my picks. The South particularly seems to come down to the Joel Embiid injury for Kansas. If he is able to play, they could win the whole tournament. However, with him out, I like the New Mexico Lobos to spring an upset and advance past them.

In fact, I like New Mexico to go all the way to the Final Four, barely edging Florida in the Elite Eight.

Out West, I have a hunch on a similar upset. Oklahoma State went through its troubles this season with and without Marcus Smart. However, now everyone is back and OSU seems like an awfully hard matchup for Arizona. I like the Cowboys to beat the one seed and run through the rest of an otherwise weak region.

I know it may seem silly to predict a Final Four of four seeds, a seven seed and a nine seed, but this basketball season has shown so many ups and downs from even the most elite of schools (I’m looking at you Syracuse) that the higher seeds don’t even seem better to me. It may be an upset based on the ranking but I see no upset in quality by picking those schools to advance.

Who do you like in this mad March? And do you agree on the perception of imbalance throughout the regions where the South and Midwest seem much stronger than the West and East?

Also, gimme your picks for round one! I like Tennessee, NC State, Albany and Texas Southern. I have no idea why.

I’d call you crazy to pick such a wild group of Final Four teams, yet you seem to be in the majority this year. Many people are taking the Spartans, or Louisville to win it all. A dose of reality is in order and I’ll get to my own Final Four picks in a minute. But lets start with the good stuff. Upset city baby!

You picked the winners of the four play in games…. moving on. I’m giving you my gut reaction, First Round Upsets. These are keepers. You may like the Lobos of New Mexico to head all the way to the Final Four, but I like the 10-7 upset of Stanford taking down New Mexico in the round of 64. Piggybacking on the lack of respect for what was once the Big East, I like Providence upsetting the Tar Heels of UNC in their 11-6 matchup. I’m also taking one more 10-7 upset with Arizona State beating Texas. Finally, because there’s always one, I’m taking North Dakota State over Oklahoma for the 12-5 upset.

Okay, enough of the upsets which may or may not ever happen. Time to put my money where my mouth is. Starting in the Mid West region I too like Louisville to beat Witchita State, yet the Cardinals are not getting past Duke. I like the Blue Devils in the Final Four.

The East region is definitely a dog fight, yet besides a potential matchup with Villanova, I think Connecticut has a sweet draw. Virginia is a bit overrated in my opinion and won’t get past both Memphis and Michigan State. I too am on the Spartans bandwagon and have Michigan State in my Final Four.

I’m drawing chalk in the West region with Arizona beating Wisconsin to make the Final Four. And now for my favorite region, the South. I do think Kansas gets its man back, just in enough time to take down UCLA in the round of 8. I have Kansas in my Final Four.

As for how the tournament seeds shook out, I’m less concerned with the actual numerical seedings as in years past and more focused on the matchups. I do think a team like Louisville could have come in at a 2 or 3 seed, but ultimately its the region that matters and all four are full of great basketball teams. Its like Warren Buffett got together with the NCAA and asked them to make things more complicated, since he put one billion dollars on the line this year. You can normally count on some chalk, but this year’s tournament begs you to ignore it. Yet every year we see a ton of chalk, making the billion dollar challenge even that much tougher.