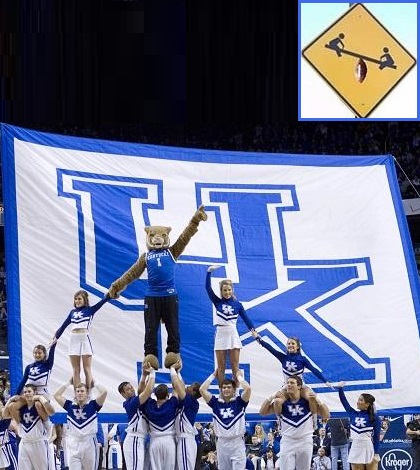 The Kentucky Wildcats going undefeated in College Basketball will be the biggest NCAA March Madness storyline of all our lives. Only the Patriots and UConn Huskies have grabbed national attention with undefeated hype, yet neither faced a Final Four gauntlet like Kentucky is about to enter.

The Kentucky Wildcats are 27-0 on the season, with four games remaining in the regular season.

They have to face a ranked Arkansas team with NBA lottery hopeful Bobby Portis and company pining for the upset. They have an underachieving Florida club looking for a signature win to rectify its season. Other than that, Kentucky just has to show up and not not give a shit.

…at which point John Calipari’s club will be 31-0.

The rest of the SEC is pretty weak. The aforementioned Razorbacks are in second place and have maybe one signature, out-of-conference win this season; that being a road win over SMU. They lost both of their other out-of-conference road tests, and yes, they played just three.

So bear with me in assuming UK wins the SEC tournament. Not a stretch.

If the Wildcats enter the NCAA Tournament undefeated, is this the biggest college basketball storyline of our lifetimes?

NC State won the title in miraculous fashion in 1983, but that wasn’t quite in either of our lifetimes anyway. The Fab Five Michigan clubs of the early 1990s were huge. Florida winning back-to-back championships in the 2000s was obviously historic.

A team hasn’t finished a year undefeated since Indiana did it in 1976 though. That’s 39 years ago!

Sure, it’s kind of an argument killer that Wichita State entered the tournament undefeated two years ago, but I bet you didn’t even remember that happened. No one gave them much credit for it, and they promptly lost to…Kentucky.

No one is even talking much about UK as far as the postseason is concerned because there isn’t much to say. We’re all just waiting. Kentucky is going to be the tournament’s top overall seed. It is going to be the highest of high drama once the games begin. But for right now, everyone is just going through the motions.

It is silly to get too hyperbolic with these things because we all have the shortest attention spans of any era in human history. I don’t even remember tournaments from the late ’80s and early ’90s without looking up what happened.

But whatever. Because this would be bigger than them all!

I was trying to remember the biggest college basketball storylines of the last ten years, stretching things back throughout my lifetime to recall if ANY team came close to undefeated hype. The long and short answers are no. Nothing comes close to undefeated hype and not a single NCAA tournament would compare to the one Kentucky is about to give us here in 2015.

There are few things larger than life, few things greater in sports than an undefeated season. It’s practically impossible in Major League Baseball, in professional hockey, and in the NBA. The most insane and energy filled football season of my life came when the New England Patriots went undefeated into the Super Bowl. The NFL was never the same, even though they lost to the Giants. If Kentucky can enter the 2015 NCAA Tournament at 31-0, this might save the sport of college basketball. It might already have.

Outside of conference rivalry games, like the stellar Duke vs UNC contest last week, there isn’t much to talk about during the college basketball regular season. We can debate who will be the better pro player, who goes higher in the NBA draft, or who will play best come March Madness. But none of that is really interesting until after a champion is crowned. Once the young players make their mark in the big dance and in the Final Four, then the debate heats up. Except this season has been different. This season we have a story.

March Madness and selection Sunday sweeps the nation every year, but recently its felt less about the teams and the players, and more about simply making picks for fun or money or both. As the regular season fell out of the national spotlight and into the hands of diehard fans, only those diehards really knew the teams come March. This season we have two clubs that have already breached my personal news cycle. Kentucky is undefeated and Duke stands as the second best team, the only one that might seriously take them down.

Selection Sunday will now determine who Kentucky faces, who stands in their way of immortality. Has their weak conference over-inflated their record? Is that even possible when you’re undefeated? Nothing will be bigger and March Madness, along with every Kentucky game, will be can’t miss.

If we agree that this is the biggest college basketball story of our young lives, can the Kentucky Wildcats pull it off? Can then go undefeated like the UConn Huskies’ women’s team did so famously for two full seasons in a row?