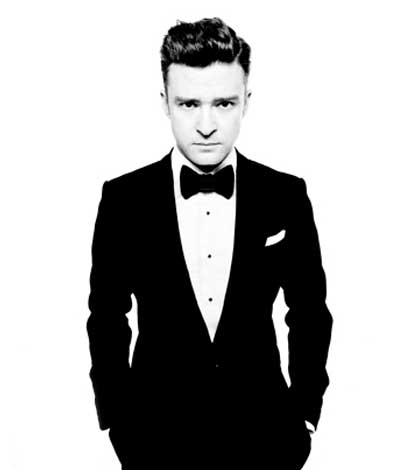 Funny! Yes… Funny! Justin Timberlake is SO Funny! So Funny in fact some kids just coming-of-age probably think he’s fresh off the set of Saturday Night Live, or maybe right-out the-make-up chair from his last film and looking to break into the music biz. Ha! Come on kids, get with it! Justin’s been around (what seems like) forever!

It’s been 7 years since JT’s last record and believe it or not, this is only his third full length studio release-I know! Crazy right!?! Ever since his sophomore solo recording effort, “Future Sex/Love Sounds” (serious title huh?) he’s been working out his creative juices in front of the camera and making us all wonder, “Is that it?” “Is Justin done with the music business?” But no, it seems he was just giving that part of his brain a rest. Sort of a re-boot if you will. And now he’s back with an upcoming collection of songs titled “The 20/20 Experience” (another curious record title, hmmm).

The first single off the record is “Suit and Tie.”

Suit and Tie in typical Timbo fashion, starts with a strange-almost incoherent- laid back introduction that takes a few listens before it sinks in. When the groove starts, it doesn’t really hit you over the head, but it does transmit a durable-steady pulse, with lofty vocals and smooth musical transitions. The song is a mid-tempo R&B track-almost a Hall and Oates throwaway–with a touch of Michael Jackson’s sexy saunter.

Then of course there’s Jay-Z who comes in to throw-down a quick hip-hop blast (who knows what purpose this serves) but hey, if Jay-Z’s name is on it and (presumably) produced by the man with the golden touch, than who can deny him some mic-time right? Hey, give Justin some credit too for networking with the right crew. Plus, he is definitely not lazy. I mean, if you show up and Jay-Z is in the room –you better be prepared! And Justin is a true professional – always organized and ready to go.

When the album is finally released (release date is still TBD), Suit and Tie-the single, will be old news. A pretty smart way to ‘tease’ his fans… toss out a less-than-perfect track to whet our appetite while the stronger songs wait their turn closer to release date.

Hey! Justin Bieber. Make a mental note. This is how it’s done my brother…! Bam!