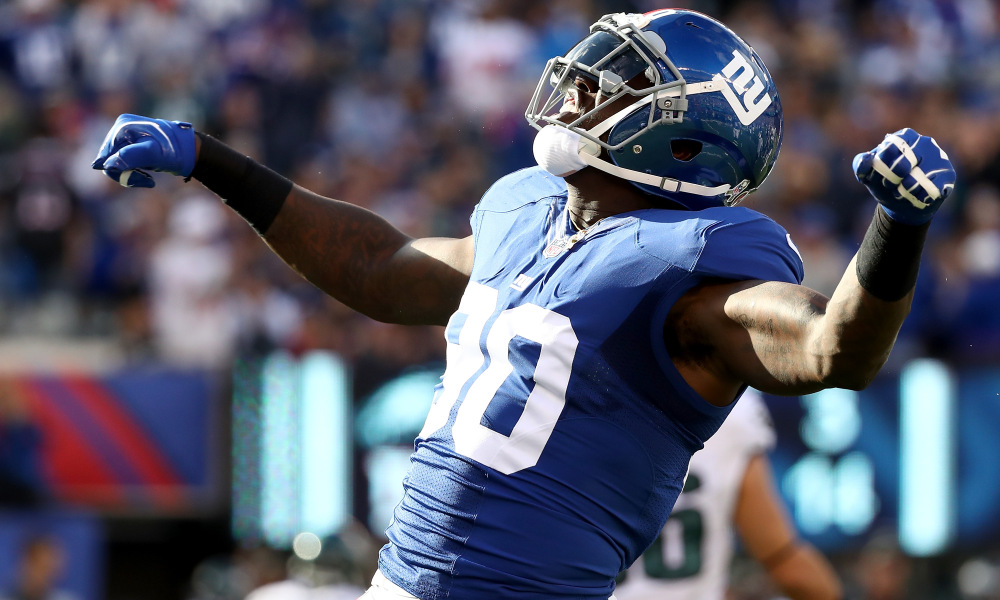 After trapping him on the franchise tag, the New York Giants signed defensive end Jason Pierre-Paul to a new contract. The deal was pretty bad for the team and also completely necessary.

This week, defensive end Jason Pierre-Paul and the New York Giants agreed to a new contract. The two sides came to an agreement that will pay Pierre-Paul $62 million over four years, with $40 million of that guaranteed. It is a signing that could look pretty bad for the Giants relatively quickly. It was also completely necessary and unavoidable.

Pierre-Paul, under this new deal, is being paid like one of the best defensive ends in the NFL. Though he has major skills and name recognition, the truth is he isn’t on that level. Though his game possesses great balance between pass rushing and run stopping, he doesn’t have the high-end quarterback pressure results that the best edge rushers in the NFL do.

This is a guy who is still living off of his 2011 season, when he registered 16.5 sacks in 16 games. In some respects, his off-field accident has actually aided this disengagement. New York thinks he still might be that guy. The reason is, the team hasn’t seen a full season of evidence that he is not. A solid 2014 helps precipitate the argument. So instead of paying JPP like a quality defensive end with a lower-than-ideal ceiling and spotty injury history, the Giants are paying him like he is one of the best players at his position in the sport.

Even beyond committing to him for four years, guaranteeing him $40 million is a huge risk. Jason Pierre-Paul successfully overcame his hand injury last year…and still missed a quarter of the season and the team’s playoff game with unrelated injuries. He’s only played 800 snaps twice in the last five years. There is a heavy cap on how elite he can be because of his hand. There is also a pretty low floor on how little the team may get out of him because of that injury history. Guaranteeing anyone $40 million is ballsy; for Pierre-Paul, it seems downright foolish.

New York really had no other move here. The team had to give him this new deal. The two sides couldn’t go through the season with JPP playing under the franchise tag. Based on his words, that would essentially end the relationship moving forward from the player’s point of view. More pressing, it was an unwieldy amount to carry on the salary cap this offseason. New York couldn’t swing it.

Instead of Pierre-Paul being a $17 million end in 2017, he is now, according to reports of the contract details, counting just $7.5 million against this year’s cap. That figure goes up drastically in the subsequent three seasons, but it offers sweet relief right now. The Giants went from having one of the biggest cap crunches in the NFL to having more than $14 million in space just through this contract alone. With numerous holes elsewhere on the roster, finding more money was a necessity. Offering JPP such a huge signing bonus and high guarantee might have been the only way to get it.