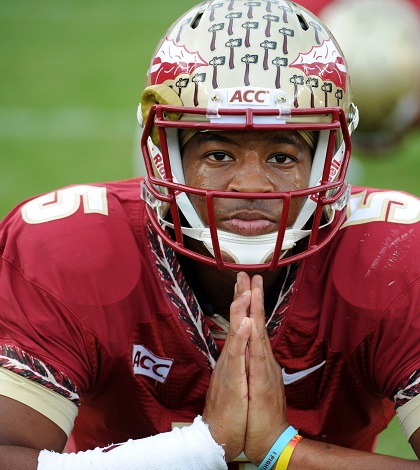 It’s always fun when there are two high-profile NFL rookies in the same class, playing the same position, especially quarterback. Not so long ago Andrew Luck and Robert Griffin III topped the NFL Draft in 2012, inspiring countless debates over which prospect was better suited to the NFL. By now we’re starting to get the picture: RG III had the faster start, but over time Luck has proven to be the more valuable passer. Enter Jameis Winston and Marcus Mariota in 2015, but only one has the higher ceiling.

So far this season, similar debates are raging among fans and analysts regarding Jameis Winston and Marcus Mariota. They were the top two picks in the 2015 NFL Draft, the two best quarterbacks coming out of college, the two previous Heisman Trophy winners, and two players who will start for their teams from day one, possibly becoming franchise QBs. Yet Winston has already begun to separate himself.

The quarterback debate is certainly more interesting this season. It’s harder to articulate the differences between these two signal callers. In 2012 there were clear areas of strength for both Luck and RG III. Luck was the better passer, and RG III the better runner and overall athlete. Luck had more poise, while RG III was arguably more of a gamer. In 2015 we can’t easily make characterizations like this for Winston and Mariota. Both excel at passing, intelligence, and leadership. Yet its Jameis Winston’s ceiling that truly stands him apart, and this time around we won’t have to wait years before finding out who the better NFL QB actually is.

Go ahead and throw out the numbers. Marcus Mariota put up quite literally some of the most impressive college QB stats we’ve ever seen, stats that made Winston’s own incredible numbers look comparably unremarkable. He’s an outstanding young quarterback, and a gifted passer, who ought to have a long career in the NFL. But Jameis Winston has about as high a ceiling as any quarterback that’s entered the NFL in the past seven years, with the possible exception of Andrew Luck. These are the top three reasons why.

I realize this isn’t the most in-depth statistical analysis, but Jameis Winston wins football games, and in the end that’s what we judge these guys on most. As a freshman starter at Florida State, Winston led his Seminoles to an undefeated season and a national title. As a sophomore, he took them all the way to the college football playoffs, where they were beaten soundly in a semifinal matchup (by Mariota’s Oregon team, no less). But it’s actually his sophomore season that interested me more. Anyone watching could see that last season Florida State was not quite at the level of other top-tier college teams, and nowhere near as good as they’d been the year before. Yet Winston essentially put them on his back time after time, and hauled them to the national semifinals.

We haven’t seen a pure winner like Winston in college since Cam Newton, and we all remember what happened in Cam’s rookie year. Newton was a sensational rookie, then gradually dipped down a bit, and seems to be rounding into form as a rock solid NFL QB with some lingering elite potential. The Bucs would take that career curve out of Jameis Winston in a heartbeat.

The talk of Winston’s off-field issues have been a bit overblown, not because it isn’t important to hold athletes accountable for their actions, but because it’s gotten in the way of judging him as a player. Jameis Winston had numerous small off-field incidents at Florida State, and has somewhat justifiably been branded as unstable. But the remarkable thing is, none of the turmoil Winston experienced off the field seemed to affect him in football games.

Winston was incredibly poised throughout his college career, despite receiving more negative attention than a lot of professionals could deal with. Just imagine how focused and disciplined his football will be when he’s not dealing with so much off the field. Presumably the Bucs organization is keeping pretty close tabs on its young QB. So if Winston can stay on a straight path and devote himself entirely to football, not exactly an easy ask of a pro athlete, he has it in his DNA to produce at an extremely high level.

3. His Situation Is Ideal

I’m not sure a rookie QB could be handed a better situation than the one Jameis Winston got on draft night with the Tampa Bay Buccaneers. Tampa has worked tirelessly to improve their offensive line, and there’s not a bad thing to say about the team otherwise.

Winston can succeed right out of the gate. He’s got a veteran WR in Vincent Jackson to rely upon, and two of the most promising young pass catchers at their positions in WR Mike Evans and TE Austin Seferian-Jenkins. There are great options in the backfield as well, assuming Doug Martin can stay healthy, and new offensive coordinator Dirk Koetter has a history of fostering quick improvement in his offenses. Winston is about to become the most important cog in an offense that is rising fast, stacked with young, strategically collected talent.

For all these reasons, Jameis Winston’s ceiling this season is quite clearly the offensive rookie of the year. As for how good he can be in the long run, Pro Bowls and the NFL Playoffs are in sight.