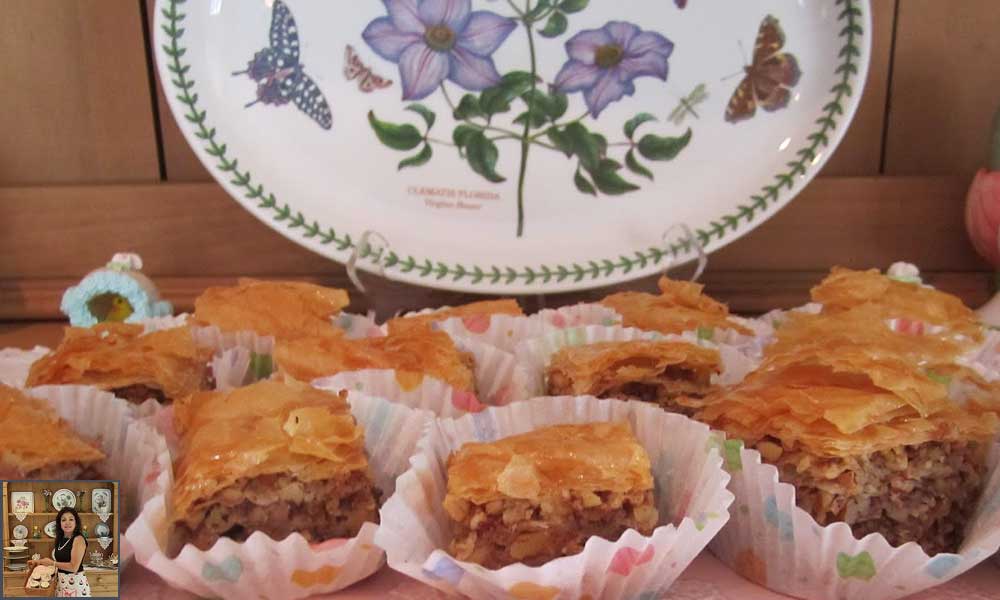 Baklava is a wonderfully delicious Greek pastry made with phyllo dough, and my golden baklava recipe makes it easy for you to create this nut-filled dessert at home.

Using phyllo dough can be intimidating at first, until you understand the basic rules for handling the dough. Make sure you cover it with wax paper and top it with a damp cloth. Be sure to keep the dough covered while using it and remember, like any new skill, practice makes perfect. Master the basics and the world of Greek pastry is open for your experimentation.

My baklava is made with a light lemon honey syrup and a hint of cinnamon. Heaven!

Thaw the phyllo dough in your refrigerator over night. Take phyllo dough out of package. Place on wax paper, then place another piece of wax paper on top. Cover with a damp towel to keep it from drying out.

Grind the nuts in a food processor until they are small, even sized pieces. In a medium sized bowl combine with sugar, cinnamon and cloves.

In a small bowl, melt the butter in the microwave.

Place a sheet of phyllo dough into the baking pan. Using a pastry brush, brush the phyllo sheet with melted butter. Repeat 7 more times until it is 8 sheets thick, each sheet being “painted” with the butter.

Cut into 24 equal-sized squares using a sharp knife. Bake at 350°F for 30-35 minutes, or until lightly golden brown and edges appear slightly crisp.

While baking, make the syrup. Combine the cinnamon stick, sugar, lemon juice, honey and water in a saucepan.

Bring to a boil, then reduce to medium-low heat and let simmer for 7 minutes until slightly thickened. Remove the cinnamon stick and allow to cool.

Spoon the cooled syrup over the hot baklava and let cool for at least 4 hours.