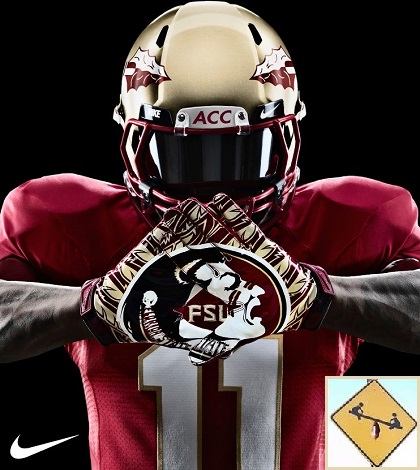 [Part one – The NFL-ization of College Football]

The key point you made is the difference between an undefeated team and a one-loss team. Outside of the fan base, as soon as a team loses perfection, they immediately become less interesting to the nation at large. It’s hard to explain the human nature as to why that is; they obviously still have a good chance of winning the national title with one loss; but it is true.

The dilution of these autumn games has me more interested in the off-field drama than normal.

In past years, I couldn’t care less about players signing autographs or agents being sneaky. Now though, as these problems coincide with the court cases and the NCAA (hopefully) crumbling, the non-football news takes on a greater level of interest.

And, the weird thing is, as a college football fan/writer/against-the-spread-picker, I am actually rooting for havoc. I want chaos. At this point, nothing would please me more than to see Jameis Winston get suspended for signing his name on something while he continually played week after week (year after year?) with rape accusations against him and pending lawsuits. Oh the irony. How amazing would that be? It would be nothing close to “amazing” in the sense of awesome, but “amazing” in the sense of, “how is a chronology of events like this even possible?”

Stories are coming out that Florida State police and the university tampered with the rape case beyond any level of human decency. They attempted to cover up the story itself, and then supposedly Jameis Winston’s lawyer got a head’s up to speak to any of the witnesses and create stories before the DA even knew about the case. I mean, I don’t have all the details, but this sounds super illegal.

And there’s an actual woman at the other end of this who feels, who KNOWS that Tallahassee has been doing everything in its power to make this entire thing just go away. It’s nothing personal against her. In fact it’s something worse. It’s literally the opposite of personal. She’s not a person to them; she’s an entity trying to ruin the Seminoles’ run at another national championship. I’m rooting for FSU to go down in flames! At this point, I don’t even care if the allegations are true. So much illegal stuff has happened after the fact, it almost doesn’t matter. Not only do they deserve it, but the NCAA deserves it and really football in general at all levels deserves some upheaval.

We need some kind of comeuppance in this god forsaken sport!

I don’t share your desire to see college football go up in flames, but I agree that it will take a serious set of illegal activity to actually cause the NCAA or the universities to change.

The real irony is that the NFL is also going through its own comeuppance, yet because it’s a huge corporation that EVERYONE cares about, unlike Florida State which is technically a school that only some people care about, it was forced to actually do something about its lack of morals. Time will tell if true change is happening, but the NFL screwed up royally with domestic violence, concussions, etc and is slowly changing. Changing for the better, I hope.

Back to Florida State which, from the opposite side of the country in a city devoted to USC football, looks an awful lot like an NCAA target waiting to fall. I don’t know if the NCAA will ultimately punish FSU after Winston leaves, much like it punished USC after Reggie Bush and Pete Carroll left. But the illegal activities in Florida seem infinitely worse than any that USC got punished for.

I realize there was evidence against USC and little proof of FSU wrongdoing has yet to surface. But if even half of what you wrote is true, jail time is in order for more than one person.

You make a very strange point about this college football season, but one I can’t help but get excited about myself. The action on the field matters significantly less in these early months. So any headline is more interesting, especially when it’s off the field issues. It’s truly the opposite of the NFL season in this regard.

I have tried very hard to continue to like Jameis Winston for some time. At first I thought he was being unfairly targeted. Then I thought he was just a dumb kid doing dumb kid things. Now I truly believe he is a speeding car heading straight for a brick wall, smashing into anything and everything in his path.

I don’t see how this kid gets drafted into the NFL, unless it’s the New York Jets picking him. It would take a desperate, dysfunctional franchise to select such a wacko headcase players. I think the Jets’ general manager is sound of mind, so maybe we can rule them out. But what team would actually bring this man into his locker room?

Winston will be drafted, but please oh please don’t let it be by my favorite team. The skills might be there, but until he proves he can make a single smart decision that doesn’t require a crooked university to cover it up, I’m staying far away. But please, continue to make headlines. We need something fun to read until the college football playoff is underway!

[If you missed Part one – The NFL-ization of College Football]