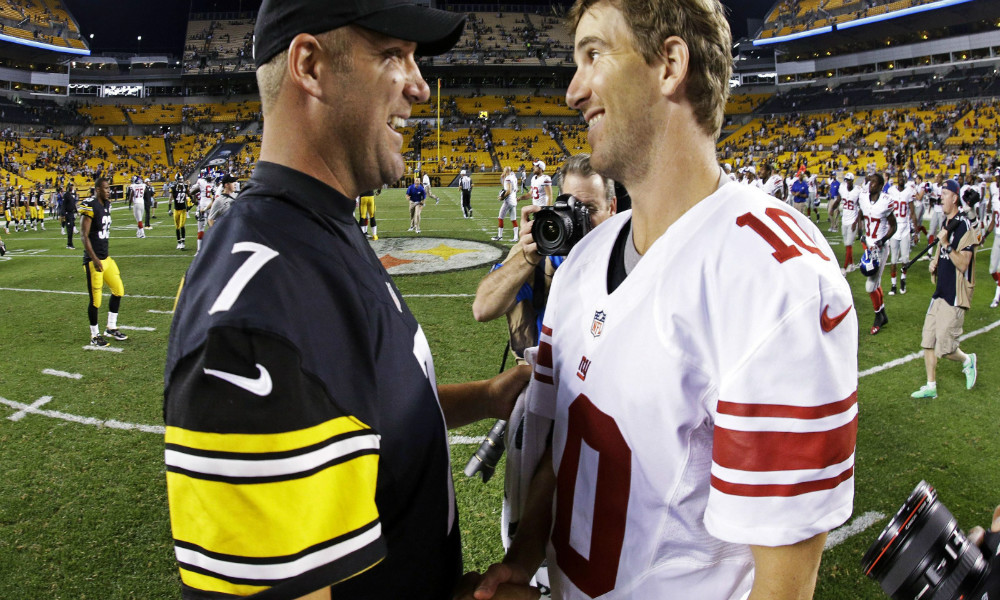 The New York Giants take on the Pittsburgh Steelers on Sunday in Week 13. Though opposing quarterbacks never technically face each other, it’s hard not to think of this matchup as a game of Eli Manning versus Ben Roethlisberger. The two are forever entwined by the 2004 NFL draft.

In the 2004 draft, Eli Manning was selected with the first overall pick by the San Diego Chargers and was subsequently traded to the New York Giants after he whined and threatened to take his ball and go home. With the 11th overall pick in the same first round, the Pittsburgh Steelers selected Ben Roethlisberger. In the dozen years that have passed since that draft, Manning and Roethlisberger have become two of the best quarterbacks of their generation and in league history. The question is, who is better and who would a franchise rather have had for the extent of their careers?

With Manning, complaining about going to San Diego was the extent of his off-field issues. Roethlisberger, on the other hand, encountered major legal issues stemming from sexual assault allegations early in his career. He has been a model citizen ever since, but that black mark has to mean something, even if the NFL does its best to sweep such incidents under the rug.

As far as on-field performance, both of these quarterbacks have been elite passers, through regular and postseasons. Manning is seventh in NFL history with 314 passing touchdowns; he is eighth all-time with his 47,000+ passing yards. Roethlisberger ranks 10th and 11th in history in the same categories. Each player has also won multiple Super Bowl titles. They will become just the third pair of quarterbacks “from the same draft class that won at least one Super Bowl each” to play each other. There is a clear case to be made that both men could find themselves enshrined in the Pro Football Hall of Fame when their careers have reached an end.

The stats and awards don’t help separate these men. Manning has been the far healthier player over his career. Big Ben has been better on a per-game basis. In career approximate value, they rank ever so close because of those factors. Ben looks like he pulls away after you get past Manning’s incredibly impressive durability. The best ability is durability, as the saying goes, but realistically a better skill is probably arm strength or something.

Roethlisberger is the more accurate passer, both in terms of completions and avoiding interceptions. He has always been the better runner, while also throwing the ball down the field with more effect. Manning’s M.O. has always been his general averageness during the regular season and excellence during the postseason. However, as sad as this revelation is, Manning isn’t any better during the playoffs than Roethlisberger has been.

Putting Manning head-to-head against classic passers who never won the biggest games are the best historic comparisons. It is the never-ending debate between overall excellence and reaching excellence at the most opportune of times. With Manning versus Roethlisberger, that debate changes. It’s pretty safe to say the latter has been the better overall quarterback. It’s also the case that Manning gains no edge in the postseason.

That means this debate comes down to reliability versus execution. There is nothing better than having a quality quarterback who you know will be in the lineup week after week and can occasionally reach great heights with his play. Well, there are a few things better. One of the things that would be better is having Ben Roethlisberger these past 12 years. Case closed.