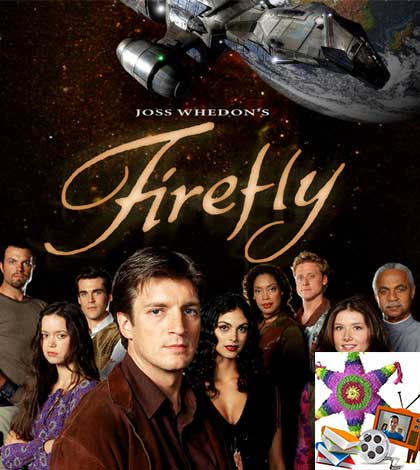 I’ve recently begun going through Netflix and watching popular shows that were prematurely canceled to see what all the buzz was about. It is also necessary to do so to attempt to figure out why said shows were put to rest in the first place.

Sometimes this is a worthless venture. I tried to watch the “classic” football melodrama Friday Night Lights but couldn’t make it through the first season. There was no difference between FNL and a soap opera other than the completely unrealistic football montages that were thrown in.

Sometimes the pursuit is incredibly rewarding but confusing. Better Off Ted was a fantastic little comedy that only lasted one year. Why did it last just the one year? I have no explanation.

Firefly, the 2002 Joss Whedon vehicle, was next on the list. It is the cult classic, the rarely seen science-fiction western. The idea was a good one; the execution…not so much.

The show is fine; there is nothing inherently wrong with it. However, there is little redeeming about it either. The plot follows a star ship crew completing missions and becoming a family of sorts. Each episode introduces a singular plot that gets resolved in the one episode, a la Doctor Who. There are also overarching stories to follow as the season progresses. Nothing is all that interesting but the show is enjoyable enough.

If that’s where things stood, I can understand the cancellation. I didn’t find myself becoming particularly attached to any characters either, a death sentence for long-term devotion. So why the constant and heated desire for a network to unearth the show and bring it back from the dead? Why the clamoring for a reboot? This year, Esquire held an online tournament where voters determined which dead show should be brought back, and Firefly made the finals of course.

Is this anything more than people realizing it was created by Joss Whedon and thinking it should be brought back? That’s like saying a good musician doesn’t make bad songs because they also make good songs; it’s illogical.

So what then? Why the Firefly love still all these years later?

I don’t have an explanation beyond it hitting many of the boxes that coincide with the type of people who would even go online to vote on a made-up poll about fictional TV reboots: sci-fi, check; guns, fighting and junk, check; cute girls, check; Joss Whedon, check. In this world, the interesting premise and good details outweigh the average execution. At least no television executives have fallen for the bait…yet.