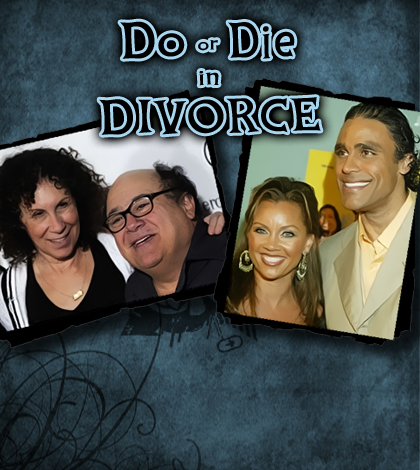 “They say it’s a river, that circles the Earth… It conquers all.  It changes everything…” Typing those lyrics, I hear Vanessa Williams and Brian McKnight’s beautiful voices singing Love Is.  Granted the song is about love fading, but in 1993 I didn’t know that.  All I knew was that I wanted a love that consumed me like that! A love that conquered my life and that lasts a lifetime with my one true prince!

Twenty years later, I still hold my thoughts true! Hey, I’m a woman in love.  But the other day I read some disturbing news.  After thirty years of marriage and in total a forty-year relationship Danny Devito and Rhea Perlman are getting a divorce.  Hold on, did I say a forty-year relationship?  Yes, I did.  And now they’re going to get divorced after spending more years together than they lived apart.  More years than I’ve lived.  I just can’t fathom that! They have three children; they have four or five houses I bet.  But noooo, none of that mattered.  Apparently good old Danny has a wandering eye and is quite the ladies man.  Gold diggers rejoice. Okay, well I wouldn’t have guessed that one!

Okay, let me tell you that I value the longevity of relationships.  I’ve been in a ten-year relationship and am marrying the man of my dreams next July.  Woo! My parents have been married for forty-years and my man is the product of happily married high school sweethearts. But hey, I ain’t saying that I haven’t had my ups and down. Seriously though, divorce after forty years!

I wonder though if Danny and Rhea shouldn’t have divorced years ago?  I read on my favorite gossip site Perez Hilton that their relationship has been breaking down for the last ten years.  Ten years?  I’m sorry this is just crazy! You’re in your sixties, maybe you’ll find love again, but also maybe you’ll die in five years. Sure people live well into there ninety’s now a days, but you spent so much of your life with this one person.  I just can’t stop thinking that they probably should have ended their relationship years ago! Ripped the band-aid off, gotten it over with.

I found someone that I want to spend the rest of my life with.  That at times I love more than I love myself.  If for the rest of my life I could only spend one night a week with him, I would do it because one night is worth more than thousands of nights with someone else.  I have to think that at some point Danny and Rhea felt the same way.  Where did that love go? Was it ever there? Only the Devitos know for sure.

It’s okay though. I’ll hold on to true love for all us. Love does conquer all!