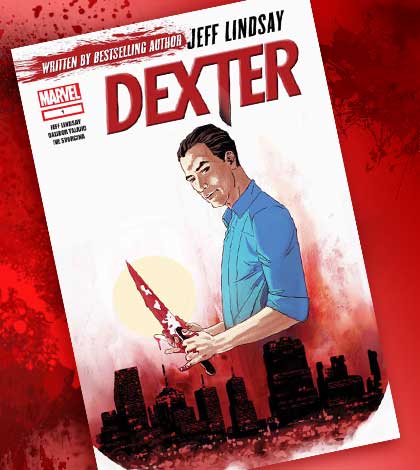 Somewhere in the second season of  Showtime’s Dexter, forensic blood spatter expert Dexter Morgan crossed paths with a comic book store. But it’s surprising that after years of popularity, the character hasn’t actually been in a comic book. 2013 will change all that.

Written by the character’s creator novelist Jeff Lindsay, Dexter will begin with a five-issue mini-series from Marvel Comics that launches in February 2013. If you’re a fan of the show, know that Lindsay’s original take went in a different direction than Showtime did. But obviously, it’s still Dexter Morgan, following the novels’ continuity after the first season of the show, which veered from Lindsay’s novel Darkly Dreaming Dexter.

Lindsay is writing an original story for Marvel, not adapting one of his novels. In the mini-series, Dexter gets caught up in his high school reunion, while trying to catch up with the Skid Row Slasher. Just like the TV series, much of the fun will come from Dexter trying to appear to be a normal healthy member of society.

In Marvel’s press release, Lindsay claimed “Marvel Comics has always been a place where I felt at home. It has been a very important part of my life, and has always been a wellspring of creative and relevant ideas.” While Dexter probably won’t be existing in the mainstream Marvel Universe any time soon, you have to wonder at the possibilities of him crossing paths with, say, The Punisher.

Art will be by Dalabor Talajic, who just finished up a long run onDeadpool, yet another character who might be interesting to clash with Dexter.

Ah, well. We’ll have to wait until February to see Marvel’s take, just when everybody gets that first chill of withdrawal from the end of the show’s season.

Let there be blood, and let it be entertaining.