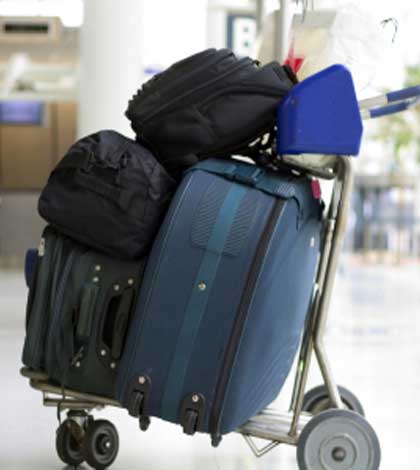 The “perfect” partner doesn’t exist. Accepting baggage’s existence is a step forward in rational thinking. There’s only question we need to ourselves when bringing someone new into our lives; “Are these the types of issues I’m willing to handle?”

Meeting a romantic prospect is like buying a “blind item.” At first glance everything looks great. In our first meetings, far too much information is missing to form an accurate assessment of what lies beneath the surface. People tend to be on their best behavior when dating. They present the person they think we want to see. Only time and ongoing interaction will reveal the complete picture (and baggage).

Every relationship has its baggage. Each partner brings his or her own emotional baggage to the romance. The question is: What’s checked and what’s unchecked?

Checked baggage is the stuff we already know about ourselves. We have clarity and awareness. We’ve done the inner work to shift our auto-response from a blaring alarm to the ding of a doorbell.

Unchecked baggage creates explosive reactivity. Chaos reigns instead of love. It turns good moments into bad the flash of a second. Unprocessed issues are heavy baggage that no one is claiming.

It’s our job to decide which things we can/will handle, and which things we cannot/will not handle. We all have our “I don’t want” lists. The funny thing about baggage is how unique it is to us. One person’s baggage can be fine, but a deal breaker for someone else. Baggage comes in all shapes and sizes. It’s as varied as its owner.

I ended a three-year relationship with a man who had unchecked baggage. By that I mean he was completely unconscious of his “own stuff.” He was incredibly loving and supportive. He treated me wonderfully. But his unchecked baggage left me holding the entire bag.

When we’d hit a bump in our relationship road, he’d become over-reactive. My even-tempered gentleman would morph into rage. Worse yet, he didn’t want to figure out what was causing his outburst. He had a vague idea that it was based in fear, but that was the end of it. As long as nothing happened again to bring it up, the monster would stay inside the cave.

But life has its own agenda. Stuff happens. Fears come up. I couldn’t discuss any of this with him because there was a “no talk” rule around his issues. I could discuss my feelings. But his reactivity, even when glaringly present and obstructing our forward movement, was off-limits. We needed mutual dialogue and mutual responsibility to make our relationship work. Yes, I had a great guy who was not too terribly laden with heavy baggage. But because his baggage was left unchecked (and there was no willingness/openness on his part for self-discovery), it was too heavy for both of us.

While it’s true that the type of baggage must be workable for both partners, it’s also true that both partners must be willing to work on their own baggage. Baggage isn’t just a label for other people’s challenges. It’s also a label for the personal challenges we carry into a relationship.

One partner cannot do all the work. Both are required to do their own inner work while contributing to the ongoing effort of maintaining connection. Baggage is a two-sided issue. We must attend to our life and clean up as much as we can on our side of the street. It’s always an inside job. Relationships are ultimately us, meeting ourselves through another.