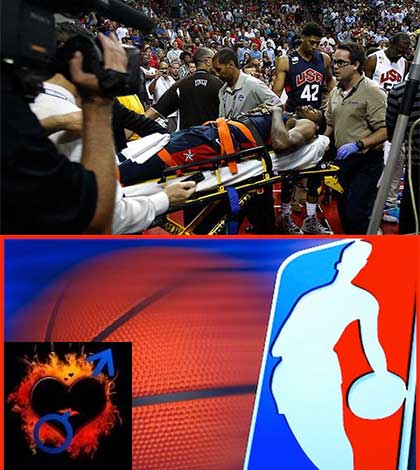 By now I’m sure you have heard or seen the injury to Indiana Pacers’ forward Paul George. For those who have weak stomachs, I suggest you not watch it. From my anatomy classes, I can tell you with authority the leg is not supposed to bend like that. It’s probably on par with the leg injuries to Louisville’s Kevin Ware and the Washington Redskins’ Joe Theismann (the worst ever). They all have their own, special level of cringe. You know what I mean; your face scrunches up in a ball and you just look away. Except for me, but then again I’m not normal. I’ve actually seen worse.

No comment from the peanut gallery on this one.

I found several photos of the injury from the point of contact, meaning the exact moment his tibia and fibula decided to bend at a 90 degree angle. With that, I’m not going to post them here, because it’s one thing to talk about it and quite another to actually see it. I can talk about the new STD known as blue waffle all day, but it’s much worse to see a photo of it. Besides, while we all have athletes we don’t like and sometimes hate, no one wants to see them get injured.

Side note, DO NOT Google blue waffle unless you’re ready to see the worst, and I do mean THE worst, image on the internet. It’s worse than Two Girls One Cup. Don’t say I didn’t warn you.

This is the last warning.

It goes without saying that team USA now has a tougher road to win the FIBA Basketball World Cup, which starts August 30th in Spain. Don’t get me wrong, a starting five of Kevin Durant, Derrick Rose, James Harden, Anthony Davis, and Stephen Curry is still pretty good. But Paul George will be missed by team USA. And if George misses the entire 2014-2015 NBA season because of this injury, the Pacers might not even make it out of the first round of the playoffs. It’s tough to replace a starter who averaged 21 points a game last season.

Freak injuries can occur at any point and time. That’s why they’re called freak injuries. They don’t have a rhyme or reason, they just happen. I always think of Tony C when I hear of freak injuries. For those who don’t know, Tony was a 19 year old rookie for the Boston Red Sox in 1964. He hit 20 home runs that season and led the American League with 32 the previous year. He hit 100 home runs faster than anyone in MLB history. He was a Boston kid playing for his hometown team; there’s nothing better than that. On August 18, 1967 Tony C was hit by a fastball in his left eye. He was never the same. He missed the entire 1968 season and was never ever the same.

The famous SI cover of Tony C. The man who was on his way to 600 home runs.

NBA commissioner Adam Silver recently said he will bring up this issue to the owners in meetings over the next few months. “It seems clear, however, that this will be a topic at our next NBA competition committee meeting in September and our board of governors meeting in October,” Silver said. “And, of course, we will continue to evaluate the pros and cons of participating in international tournaments.”

I’m here to predict the outcome; if one more star goes down in international basketball, that’s it. All international competitions will be played by collegiate athletes.

You can blame two factors for this outcome, health and money. Actually, that seems like a campaign hot button topic for the mid-year elections, doesn’t it?

Aside from the obvious sight of a freak injury, a player’s health is now up for debate. Regardless of the shape of these professional basketball players, they still need time to rest their bodies. That’s why every sport has an offseason. A body needs to heal and recover. No one can go at a hard pace forever. Eventually your body is just going to break down, get injured, or stop performing at the same level you’re used to.

With that being said, elite players are typically on good teams that advance into the playoffs. This is especially true in the NBA. Paul George played in 80 games this past season, followed by 19 playoff games, and then went to play in this international tournament. He would have had about five weeks of rest before the NBA season kicked off if he’d skipped the tournament. That’s not much of an off-season to begin with. So what’s the real reason LeBron, Kevin Love and ‘Melo opted to sit out of the FIBA competition? They knew they needed a break. They’ll probably be around for the Olympics, but I have never even heard of this particular basketball tournament. I’m pretty sure the LA Beer Olympics carries more prestige.

Money is going to be the other root of evil with this situation. NBA owners simply don’t want their franchise players to lose a season to injury. Then again, who would? If you own a business you don’t want your employees missing chunks of work for months on end. If you’re reading this in an office, think of what would happen if three employees said they were unable to type on a computer for 12-14 weeks because of carpal tunnel. Just imagine (1) how much less productive your office would be and (2) how much more responsibilities you’d have all of a sudden. You’re dreading the next three months now, aren’t you? For professional sports teams, same thing.

While there is no immediate need to panic quite yet, keep this in the back of your mind. When millionaires lose money, they will remedy the situation so they can obtain more of it. If that means banning professional basketball players from international tournaments, so be it.