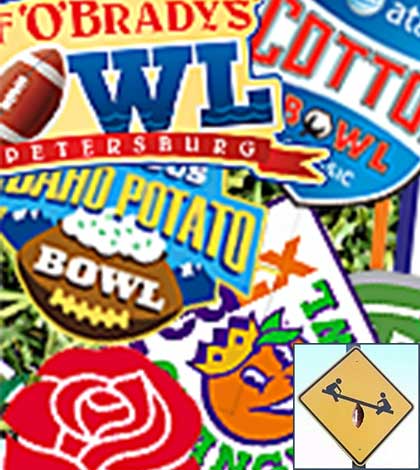 Of all the crazy College Football Bowl Games Names, what’s the absolute weirdest? How do we fix this broken system where no bowl games matter outside of the playoff? Time for debate.

Ranking the best bowl-game action is all well and good, but outside of the playoff, doesn’t the excitement surrounding college football’s bowl season really come down to the names? The bowl game names are so ludicrous, they’re almost begging for the attention. We won’t deny them their applause. Here are some of the beauties from this season:

You have any particular favorites? And more importantly, does the fact that silly names are the funnest part of this bowl season underscore the development that bowl season in general is kind of worthless? Something should be done about the college football postseason. Here are the two options in my mind:

Neither is likely to happen because bowl games serve a monetary purpose, but A is the most feasible move. Chopping bowl season down to size would make an invitation to a game actually mean something. This seems like the lost result that everyone wants back. Making a bowl game currently means nothing to anyone outside of the head coach, who can add the game to his resume.

Option B isn’t going to happen, although the playoff might get extended anyway…which would just add to the trouble. Imagine removing the likes of Ohio State, Iowa, Stanford and a few others from the bowl games and sliding them into the playoff. What would even be left?

I love the crazy names for bowl games, mainly because they’re the only thing fun about Appalachian State versus Ohio in the Raycom Media Camellia Bowl. I’m voting this game as my runner-up amongst the weirdest and coolest bowl game names. As for the best, my personal favorite bowl game name of the 2015 bowl season, that honor belongs to the BattleFrog bowl, also known as the Fiesta bowl.

The real problem with the bowl game names is that every single one is sponsored. Autozone, Capitol One, Camping World and Popeyes Chicken are just a few of the weird list of sponsors attached to bowl games. The reason I singled out the BattleFrog Fiesta Bowl is because I have no idea what the hell BattleFrog is, or could be. All I think of is the old video game BattleToads and I love it! Plus its Notre Dame versus Ohio State, which isn’t half bad either.

As for fixing the system and trying to make the litany of bowl games actually mean something, the obvious answer is what you alluded to. Since the playoff system is still brand new and expansion won’t come without a fight, the solution lies in making bowl games mean something. Now we can’t eliminate half of them; there is way too much money tied up in each and every one taking place, hence the ridiculous names. What can be done is to create second tier awards and brackets among the bowls. Everyone wants to make the playoff as one of the final four teams. After that, games get assigned. But what about creating a second playoff bracket with the next four teams? That’s three more meaningful bowl games.