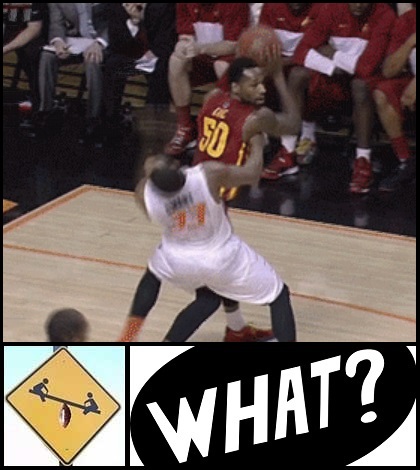 We continue our celebration of the return of NCAA College Basketball with another edition of “What ha… happened?” Marcus Smart is a bad man and college basketball is better because of it. Funny, ridiculous, and a whole lot more.

I raise your College Basketball flop with a double flop. I present to you the following:

Description: I see your ref falling down on his bottom and raise you a double block by the immortally pesky (read: obnoxious) Marcus Smart. Yes, he was eventually called for the foul here, and I’m sure DeAndre Kane had some choice words for him as well. But there is nothing better than a fired-up defender who likes to get in guys’ grills and under people’s skin.

Is this just good ole fashioned scrappy basketball?
Does Smart take it too far with that second flop?

Although it’s definitely a flop, just how far would you or I be flung if Kane (measuring in at a comfortable 6-4, 200 lbs) actually ran us over like that?

Marcus Smart is some sort of athletic freak, flopping and popping up to flop again, while simultaneously tripping his opponent in the process. Although, I can’t help but wonder if Kane himself flopped on top of Smart in order to garner a foul from what would otherwise have been an uncontested layup. Smart is on the ground!

I would characterize this as good old fashioned scrappy basketball. Trying to draw a charge is admirable and trying to draw it twice is gutsy. But once that fails, you better not let the man score. Marcus Smart took his guy down.

I want to call out Kane on this play. He trips and looses the basketball, all because the defender fell over. Come on man. Where’s the heave in the air, desperation shot, attempt to make it a three point play? This is a classic rookie mistake.

To your last question, you’d be flung six and a half feet. I would fly about four and a quarter feet. It’s simple math.

One final thought, the clip ends prematurely. I really want to know what was going on with the Olympics. The ESPN bottom line teases, yet remains blank, much like the content of its never ending stream of articles. As you would say, Zing!

[If you missed Part one – Classic Ref Flop]