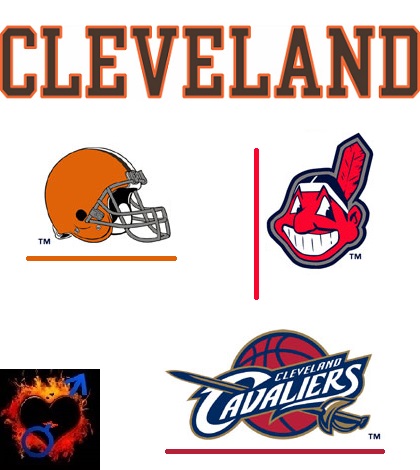 Alright Cleveland, you may have the beginning of something good here.

Thus far in the world of sports and pop culture in 2014, Cleveland seems to be making headlines. Aside from their #1 NBA draft pick (A 1.6% chance? Are you f-ing kidding me?), they also drafted Johnny Football. His last name is Manziel. Did you know that, because I didn’t until recently. Cleveland also saw a movie premiere based of their football team, the Browns, called Draft Day. Their sports scene is exploding!

Just to recap because its fun, their basketball team, the Cavs, will be climbing the ranks of the Eastern Conference within a few years. Their football team, the Browns, now have a loud mouthed, partying, headline grabbing rookie quarterback who will bring a lot of attention to a team that desperately needs it. If more movies start coming out about the city, and their sports teams actually win something, expect Cleveland to take the title of Awesome-town USA from its current holder, the city of Boston. I mean how many cities have a quarterback who is on TMZ on a weekly basis and parties with Drake and Rick Ross?

Cleveland is becoming the new Boston.

This might not be that obvious, hell you might think I’m crazy, so let me explain. To become Awesome-town USA you must have the following four key ingredients:

2) All sports teams must be in contention for titles

3) Movies must be consistently set in your city

4) Prominent actors, musicians, athletes (people of prominence) must be associated with your city

Obviously Boston has filled every prerequisite.

Since 2001 Boston has enjoyed a run of success like no other American city has ever seen. Three Super Bowls, three World Series, one NBA title and a Stanley Cup. It has also been the setting for such movies as The Departed, The Town and two more coming out very soon; The Equalizer with Denzel Washington (Need anymore info to see this movie? Name a bad Denzel movie. Go ahead, I’ll wait.) and Black Mass with Johnny Depp as Whitey Bulger (Depp has to make up for Lone Ranger, so expect a vintage performance. Think Magic Johnson in the 1993 All-Star game). This same time frame also saw Boston natives Matt Damon, Ben Afflack and Mark Whalberg all emerge as bona-fide A-list actors, as well as athletes such as Tom Brady, David Ortiz and countless others.

With all that success, Boston’s reign as Awesome-town has to end at some point. Empires always fall; that’s how the system works. Someone else must take Boston’s place and Cleveland has their starter set in place.

Cleveland sports has a LONG history of losing. Ernie Davis never played a down; The Fumble; The Drive; The Shot. The list of plays that went against Cleveland is endless. The Browns moved to Baltimore, LeBron James took his talents to South Beach, and who can forget Jose Mesa. The list just goes on. If you Googled “Cleveland” and “lost” in the same search, your computer would explode. It’s not that Cleveland has lost, they have done it in heartbreaking fashion over and over and over again.

Cleveland’s sports teams are well-known: The Browns, Cavaliers, Indians, Columbus Blue Jackets (that’s a hockey team), and The Ohio State University (I’m legally obligated to write “The” before and “University” after Ohio State. BuzzChomp needs to hire lawyers and quick.). The Browns are moving up in the world with Johnny Football (more on that later). The Cavaliers have former number one draft pick Bennett (Who developed his game in the 2nd half of this past season) and franchise point guard Kyrie Irving. They too are set to build something special. With that, the Indians still have former manager of the year Terry Francona and are only 4.5 games back of first place. Their 20-11 home record is not too shabby. The Ohio State University football team is a perennial power in the Big 12 . They have brought Ohio titles for years, which is the state in which Cleveland resides.it just takes one to open the flood gates.

As for being the setting for prominent movies, Draft Day is a good start. Boston has been the setting for tons of films and was able to pull this off by offering tax incentives. If Cleveland wants to steal the title, they will follow suit.

On the pop culture front, I was surprised to find out their were several actors born in Cleveland. Halle Berry, Drew Carey (that one is obvious), and Aresnio Hall. The city also has the Rock N Roll Hall Of Fame, but needs its sports teams to pick up the slack. This is where Heisman Trophy winning quarterback Johnny Football comes into play. He can be the one to bring cool to a city that has never seen it. He already has the swagger.

Cleveland is on the right path to being a dominant city, even if they never get there. The pieces are falling in place and someone will dethrone Boston as Awesome-town USA.