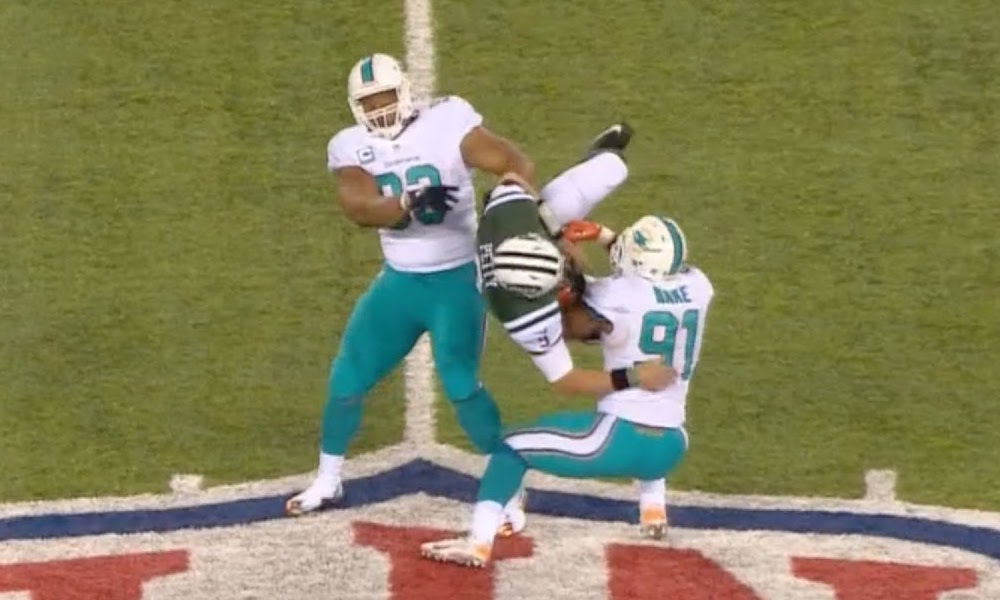 As if the loss to the Dolphins wasn’t bad enough, the Bryce Petty Pancake happened. The hit knocked the young New York Jets quarterback from the game, but how did it even occur? What ha… happened?

Please see Exhibit A above, where a young Bryce Petty became sandwiched between two of the best defensive lineman in the game of football. The BP Pancake as its now known happened after Cameron Wake and Ndamukong Suh were unblocked on their way to destroying the New York Jets quarterback. Bryce Petty was injured on the play, because these are the Jets so of course he was.

Thankfully Petty’s lungs are in tact, but Ryan Fitzpatrick resumed duties under center so things aren’t all good. Regardless of the fallout on the field from the BP Pancake, how in the hell did two of the league’s best defensive players have an unblocked path to the quarterback? What were the Jets offensive lineman doing to allow this monstrosity? What ha… happened?

While the men playing offensive line for the New York Jets are inexperienced, they are still professionals. They know to block the men in front of them on defense. Therefore I’m left with two possible explanations for how they allowed the Dolphins’ best players on defense to humiliate Bryce Petty in the infamous pancake as seen above.

The Jets offensive lineman had a bet going. If they allowed Wake and Suh to both run unabated to the quarterback, who would arrive first? Since both are large men, its fun to see how fast they really are and who’s faster. On your mark. Get set. Go!

Wake and Suh were allowed to plummet towards poor Bryce Petty, yet this bet did not end well for any of the parties involved. Petty was injured, while both Wake and Suh arrived simultaneously at their target. No one won the bet! It was a draw and that’s the worst possible outcome in these situations.

If it wasn’t gambling, then it was sex. No man can stand by and watch his lady fall into the arms of another man. One of New York’s lineman had a grudge to settle against Bryce Petty, so with the game firmly out of reach, he executed his revenge.

Petty had stolen his former lover, so he teamed up with his fellow lineman to literally punish his quarterback. Never get in the of a broken heart. It’s a tough lesson to learn, but one Petty will never forget.