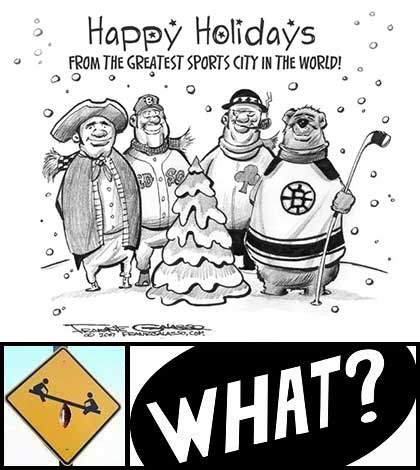 Boston sports come front and center as the Holidays overtake the internet. It’s the Holiday edition of Seesaw Sports and we’re asking What happened? Four Boston sports icons in a room together equals trouble.

What’s most disturbing about this (admittedly well-drawn) sports pic?

The Patriots are arguably the best team in the NFL; the Red Sox won a title last year and seem primed for another in 2015; the Celtics are rebuilding but remain one of two historic franchises in NBA history; the Bruins are battling through some injuries but annually challenge for a berth in the Stanley Cup finals and won the whole kit and caboodle just a couple short seasons ago.

Compared with the state of New York professional athletics….it’s anything but a jolly Christmas for Boston’s greatest rival.

This holiday edition of What ha… happened is certainly full of Boston homerism, but that’s not what is most disturbing about the four Boston sports icons wishing us a happy holidays.

I’m not the least bit disturbed by the illustrator’s obvious attempt to brag through his work either. That’s Boston in a nutshell. And the fact that the caption is pretty much true right now is humbling, but not disturbing.

What is MOST disturbing about the Boston themed ‘Happy Holidays’ is that none of the four sports icons from Boston are drinking a Samuel Adams, yet the Celtic is smoking. Also, if an animal is going to represent the Boston Bruins then I think at least one more animal belongs in a uniform. I’d like to put a moose in the Boston Red Sox jersey. I don’t care that a Bruin is a bear, this photo lacks balance.

That’s what is most disturbing, but what happened? Well Boston loves parties and after a whirlwind of championships, the four major sports icons decided to toast off Rajon Rondo with a final goodbye. Happy Holidays!