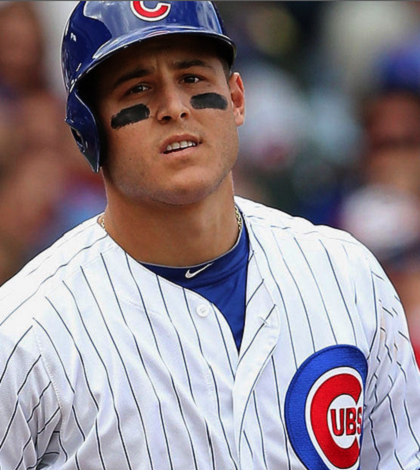 The best player in baseball this year was Bryce Harper, worth a stunning 10.1 wins over replacement (WAR). But Harper won’t be going to the 2015 MLB playoffs, so who are the five best position players competing for a World Series title? Let’s rank em up.

With so much talent in the postseason, let’s use the WAR stat to hammer out the best of the best.

WAR is one of the top overall measures of a player’s worth, and the same statistic that tells us Bryce Harper was the best player in the league this season. So using it to rank the elite players, besides pitchers, just makes sense. Included is each team’s playoff status for good measure. Let’s dive in.

Anthony Rizzo is having his best season ever in terms of WAR. He’s a mediocre defender, but that’s not the end of the world at first base, and Rizzo knows how to hit for average and get on base. He does everything well, and has found an interesting way to increase his value this year: Rizzo’s been hit by 30 pitches, the most in the league. Way to take one (or 30) for the team, Rizzo.

The tragic loss of RF Oscar Taveras in an offseason car accident prompted the Cardinals to seek new help in right field. Heyward was their answer, and has delivered. His 6.0 WAR is exactly what the Cardinals had hoped for – Heyward had a 6.2 WAR last season, his second-highest ever and the first time in four seasons he cracked six.  Now, barring a last-minute slide, he’s poised to do so two seasons in a row.

The Royals made it to the World Series as the AL Wild Card last year, but they won’t need to worry about any single-game playoff this year, in large part due to Cain. They’ve been absolutely dominant this season, and Cain had everything to do with it, hitting .306/.360/.835 on the year. That .306 batting average ties his previous career high, which he achieved in a partial season with Milwaukee back in 2010. The slugging and on-base percentages are both career highs as well.

Boy, the Blue Jays are certainly happy they signed Josh Donaldson. The Jays have a star-studded team, especially after their blockbuster trades for SS Troy Tulowitzki and SP David Price, but Donaldson stands out even among his famous teammates. He leads the league in runs, RBIs, and total bases. His OPS+ is an impressive .948, and he’s in serious consideration for the AL MVP award.

Mike Trout may be staying home this October, but he’s by far the best position player in the playoff discussion.  He was the best player in the American League and the second-best in MLB this season. Trout does everything well (he has a 0.9 dWAR this year), but his real value is as a hitter. He boasts a .295/.581/.978 slash line. Those slugging and on-base percentages led the league, but Trout still runs the risk of joining Harper on the couch as the Angels play for their lives to finish out the year.