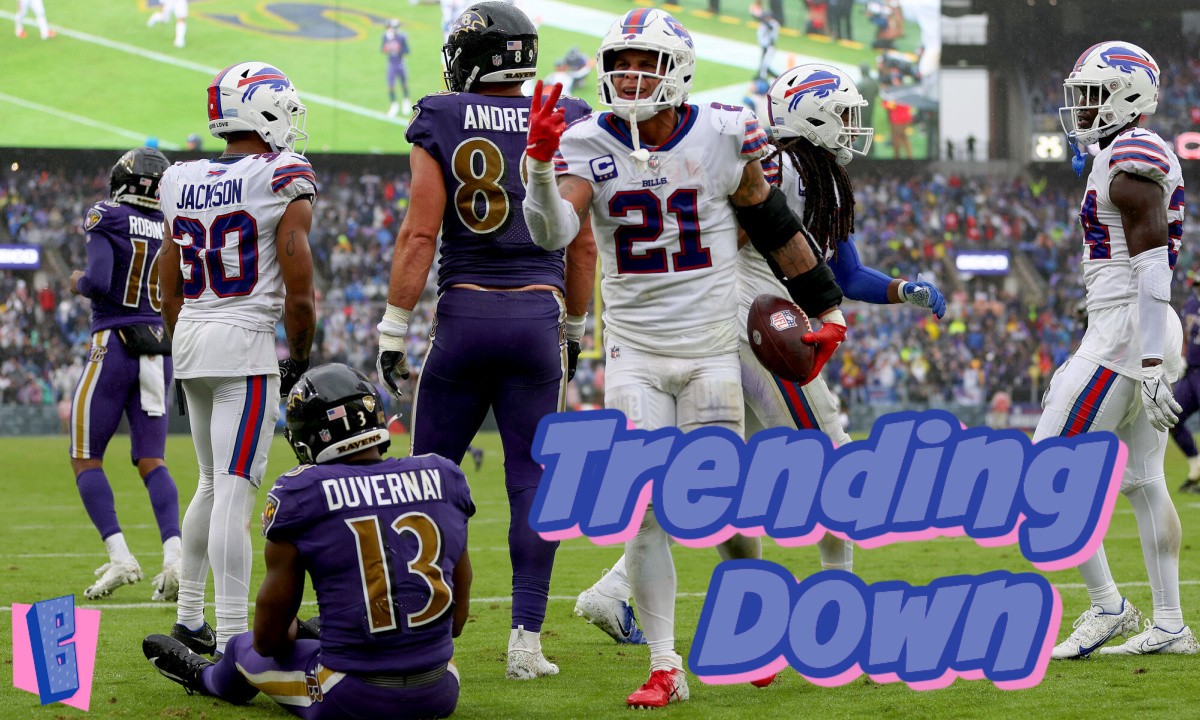 Its not simply the blown leads or one dimensional offense. The Baltimore Ravens have issues. Are they truly average, or is a playoff contender still lurking? Let’s over react.

After four weeks of NFL action, the AFC is still setting up its scaffolding. The West could still be a drawn-out battle between great teams, or a slog among mostly pretenders. The South appears to be a battle between bad teams, although Trevor Lawrence and company in Jacksonville can be excused for fumbling the game away in Philadelphia in a messy, rainy game in a tough environment. Perhaps they will be considered good after all.

The East belonged to Buffalo preseason. It probably still does, though Miami is making us reconsider. That leaves the North, specifically the Baltimore Ravens, as the team that most flummoxes us in the early going. Who are the Ravens? Are they a bonafide Super Bowl contender, or an above average team with a one dimensional problem? Can Baltimore play defense for four quarters, let alone defend a lead? One thing is certain, the Baltimore Ravens deserve an NFL over reaction.

NFL Over Reaction to Week 4

The rest of the AFC North pretty much makes sense. Pittsburgh is 1-3 and finally switching to its rookie quarterback. The Steelers weren’t expected to compete this year. Everyone else is 2-2, and yet, things feel vastly different between each squad. Cincinnati is elated to be 2-2 after its start to the season. Cleveland is feeling okay; the Browns could have lost another game very easily, but also have two losses by a combined four points. Then there’s Baltimore. The Ravens have to be furious and kicking themselves at being 2-2 after four weeks.

Going 0-2 at home is bad, but the Ravens have made it so much worse. In their first home game, Baltimore was up 35-14 heading into the fourth quarter against Miami. The Ravens famously lost 42-38. Now this past week, Baltimore was up 20-3 on the Bills and never scored again, losing 23-20. These are two, massive second-half comebacks allowed at home. That is horrible in any context. However, it came against two good-to-great opponents. On the one hand, blowing huge leads is bad (no duh), but the Ravens did establish early leads on two potential contenders.

With a new defensive coordinator, you’d understand some growing pains, but this is becoming a pattern. Do we have enough information to declare Baltimore in trouble? I don’t fully understand how the team is performing so well in first halves on both sides of the ball and then completely imploding. The defense gets shredded when it needs to stand tall. The offense, too, disappears. What changes there? If anything, we’d think a run-first offense like this would be best served defending early leads.

Do you see Baltimore as the best in the North, or does this mini trend have you as worried as it has me? Next week’s game against the Bengals will tell us a lot, but I’d rather be in the Bengals’ shoes right now. Mentally, the Baltimore Ravens have to be worried sick about how they are playing at home and in second halves, two places where true contenders should throw their weight around.

Baltimore scares me because they are completely one dimensional. I watched them play my New York Jets and it was practically a tie game at halftime. New York eliminated Mark Andrews from the Baltimore offense and stopped Lamar Jackson from running the football. It was the second half where the Ravens managed a few big plays and pulled away from the Jets. Now my Jets are a pretty decent team, but they are not yet contenders. The Ravens can hardly be considered contenders either, because a simple game plan adjustment neutralizes their entire offense.

The Jets got to Baltimore in the first half and stopped their offense. Buffalo and Miami completely shut them down in the second half of their respective games. But more to the point, the Ravens’ defense was unable to stop anyone when it got tired late in the game. Without a second or even third weapon on offense, Jackson is going to consistently not be enough for Baltimore to win. Cincinnati is in a much better position, despite their offensive line making things more challenging than it should be for the Bengals.

We all know September is a learning month for teams. The teams learn to play together and we learn their actual strengths and weaknesses. Cincinnati still has a potent offense and is learning to overcome its weak offensive line, just like last season. The Bengals defense is good enough and the team is certainly not one dimensional. So what about the Baltimore Ravens? Their schedule is favorable, but I’m concerned about their longevity this season.

To answer your question, I view the Bengals and Ravens on equal ground. My pick is Cincinnati to control the North, because Baltimore is extremely vulnerable with their one dimensional offense. A true contender needs multiple weapons for opponents to worry about, as well as a reliable defense. Sure, the Ravens beat the two teams worse than them, but lost to two teams who appear to be the best in the conference. My skepticism of Miami aside, it’s hard to see the Ravens missing the playoffs, but it’s just as hard for me to see them making any noise beyond the Wildcard round.