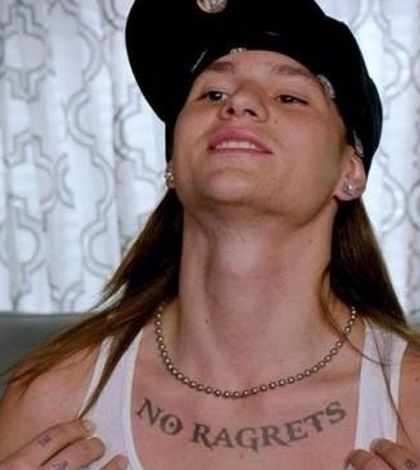 With major league sports comes major league tattoos. Yet, when you look at some of the athletes in North America, you don’t always see basic tattoos like the word “Mom” inside of a heart. Rather, you see some of the most intricate, and often ugly, tattoos.

While many of these tattoos may have a larger meaning to the player that actually bears the ink, to the pedestrian eye the ink can often be distasteful and unnecessary. With that, let’s take a look at five of the worst tattoos imaginable across all of sports.

This is a bit of doozy. If you’ve seen a picture of Mike Tyson in the past 13 years, then you know exactly which tattoo is being referenced already. Around 2002 or 2003, Tyson decided to have an intricate, tribal tattoo inked on the left side of his face around his eye. This tattoo has been criticized greatly in the media, not only for its design, but also for its placement.

The tattoo has received so much press that it was recreated on Ed Helms in the film “The Hangover 2.” However, much of the screen time given to the ink was in a demeaning fashion, often indicating how ridiculous and unnecessary the tattoo is.

DeShawn Stevenson enjoyed a lengthy 15 year career in the NBA, which saw him play for six teams in which he was able to showcase his stellar talent. He will also go down in history as having one of the most confusing tattoos ever. While Stevenson is known for his ink around the league, the one tattoo that stands out amongst the rest is the tattoo on his neck showing Abraham Lincoln’s face with a “5” on either side.

If the tattoo was not confusing enough, Stevenson has never worn the number five during his professional career. Rather, he told reporters that he originally intended to get Martin Luther King Jr. tattooed there, but opted for Lincoln because of his role in freeing the slaves. As for the 5’s on either side, Stevenson has noted that people could not tell who the face was, so in an effort to help clarify he added the 5’s so people could tell it was Lincoln.

During Chris Andersen’s tenure in the NBA, he has been known for his almost two-year ban from the league, his ability to seemingly never run out of energy, and his extremely eccentric and detailed tattoos. Perhaps the most recognizable tattoo that Andersen currently sports is the bright and colorful ink that spells out “FREE BIRD” across his neck.

Andersen has stated that the reasoning behind this tattoo is a combination of his love for the song by Lynard Skynard, as well as his recent engagement being broken off when he decided to get the ink. Many around the league have wondered what the tattoo stands for, especially since it bears part of Andersen’s nickname, Birdman. Regardless of what it stands for, the “Free Bird” tattoo is definitely one of the most recognizable and worst tattoos in sports today.

While Kyrie Irving is undoubtedly one of the best basketball players in the world right now, the same cannot be said about his choice of ink. Irving may have averaged over 21 points, 3 rebounds, and 5 assists per game last season, but that does not excuse him from this list of terrible tattoos.

Recently, it was noted during a postgame interview with Irving, that he had a tattoo on his left wrist which bared a striking resemblance to the logo from one of the most successful sitcoms in television history, “Friends.” While many adore the successful sitcom, it remains to be seen how someone could feel the need to tattoo the logo of a show on their wrist, let alone a player such as Irving.

Coco Crisp has enjoyed a very fortunate 14 year career so far in MLB, in which he has been able to win a World Series Championship with the Boston Red Sox. Crisp may also be eligible for a new award that has nothing to do with baseball whatsoever, the award for worst tattoo of all time. While many baseball players have tattoos, much of their ink is not visible, as the only skin showing on the diamond is the player’s neck and possibly forearms.

Crisp decided back in 2011 that it was a good idea to get a tattoo of what resembles a bullseye directly underneath his left ear. Normally a bullseye would not be that bad, but the fact that Crisp also got a piercing in the center of the bullseye is what got him onto this list. Not only is the tattoo ridiculous, but adding a piercing to the center of it makes it worse, and also makes it dangerous on the field. While it is unclear why the MLB has allowed Crisp to keep this piercing/tattoo combination, what is clear is that Crisp deserves a spot on this list, and the crown for worst tattoo in sports.