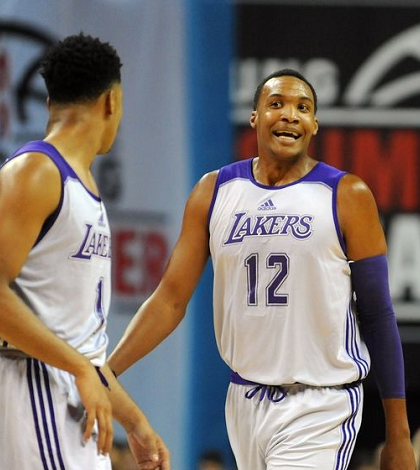 The Los Angeles Lakers have wrapped up their time in the Las Vegas Summer League, having won just one game and failed to advance to round two in the playoff bracket. But as we know, the Summer League isn’t really about wins and losses – it’s about giving prospects and new draft picks a chance to shine, and to work against NBA competition.

So how did the young Lakers do? Interesting, to say the least. Here are five takeaways from their performances.

Welcome to the 2015 Los Angeles Lakers. Once upon a time, Tarik Black seemed like the sort of player who would fizzle out of the NBA. He was a journeyman even in college, transferring from Memphis to Kansas, and establishing himself as an incredibly strong and physical player without a ton of noteworthy basketball talent. Black signed with Houston after the 2014 Summer League, and was ultimately waived and picked up by the Lakers, with whom he played for most of the second half of the season.

Suddenly, he looks like a part of the future in Los Angeles. That’s not to say Black has a significant role to play, but after Summer League it certainly feels like he’ll have some role. Black was one of only three Lakers to start all five games (the other two were Jordan Clarkson and D’Angelo Russell), and he averaged just over 9 points and 7 rebounds per game in just 23.2 minutes. He also shot 69.2% from the field, the best number on the team by a clear margin, and one that’ll help him stick around in the league if he keeps it up in the regular season. With Jordan Hill gone, we might be able to pencil Black in as the primary backup to new center Roy Hibbert.

Fans of the Summer League will know that gaudy numbers don’t always matter much. A player can erupt in the Summer League and never even make a team come fall, or he can use the Summer League to work on certain aspects of his game without showcasing others. Given these considerations, as well as last year’s leg injury, the concern with Julius Randle at Lakers Summer League wasn’t what kind of production we’d see, but how he’d look – in terms of the eye test.

In that regard, Randle passed. His stats were okay, and at times he was probably a little less assertive than Lakers fans wanted to see. But Randle looks fit, healthy, and eager to play, and he’s got a world of talent at his disposal. He flashed that talent in spurts, and once he gets some experience under his belt he should wind up being a valuable player in the league.

It’s getting hard not to fall in love with Jabari Brown. This guy went from being a top-20 prospect out of high school, to transferring away from his top choice college (he went from Oregon to Missouri), to going undrafted, to toiling in the Summer League. Then he scored 50 points in a Summer League game, got pulled up to the Lakers, and kept posting impressive scoring totals until he got a contract. If nothing else, the kid has heart.

Brown used the 2015 Summer League to continue proving himself. He’s only played in three games, but at times looked like the best Lakers guard on the court, shooting 40.5% from the field and 38.9% from three and scoring 17.7 points per game. He can really shoot the ball, and should get a chance to contribute in LA, though he may be playing behind both Kobe Bryant and Jordan Clarkson if the Lakers opt to start three guards, with Russell in the fold.

Maybe that header is a little bit harsh, given aforementioned considerations about the Summer League: it’s only a handful of games, it’s a first look, etc. Taking the stats too seriously is always a mistake.

But Russell’s rawness at Summer League went beyond the stats. Yes, he shot a very poor percentage from three (11.8%), and his turnover rate bordered on disastrous (26 turnovers to just 16 assists in five starts). But it was his style of play that might have been most worrisome. Russell displayed some pretty erratic habits, passing into traffic and seemingly letting his body move a little faster than his mind at times. All of this is forgivable; the kid has to get up to speed, even if he’s a future All-Star. But Summer League probably clarified that we shouldn’t expect Russell to turn things around in LA from day one. He may be great, but it’ll take time.

While Russell played some discouraging basketball, Jordan Clarkson – the young point guard he’s expected to more or less replace – was, by comparison, a picture of poise. He scored 16.8 points per game, held up a positive assist-to-turnover ratio, and kept his fouls down (something most guys struggle with in Summer League). His decision-making was crisp and confident, and he was a noticeably stable presence on the court.

This probably speaks more to the fact that Clarkson has a year under his belt than anything else, but for Lakers fans it was nice to see. This kid didn’t just benefit from a weak lineup last year, allowing him to collect his own stats. He’s a player, and he deserves to stick around with or without D’Angelo Russell.