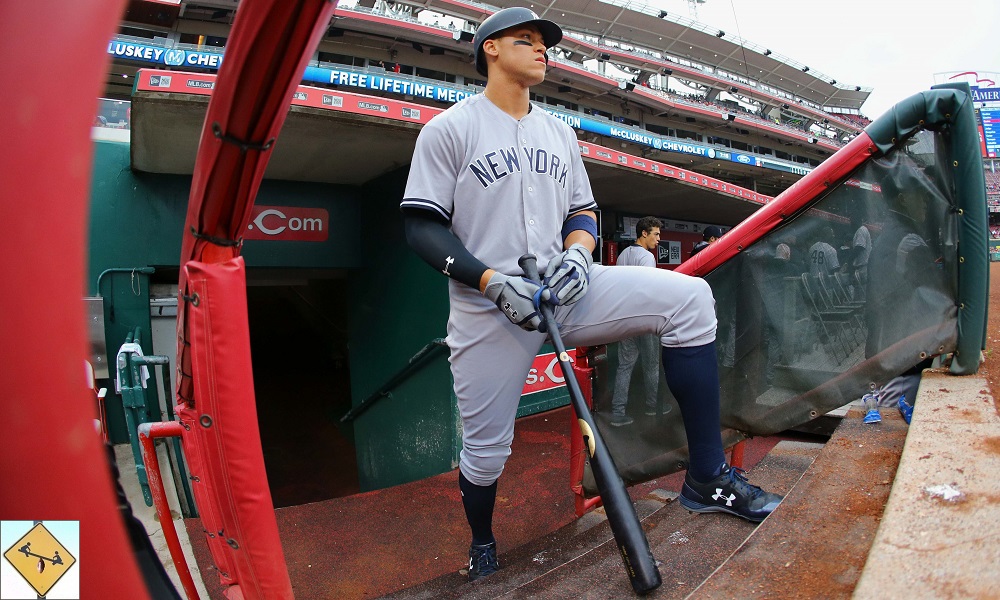 No ball is safe in the 2017 Home Run Derby, but is the event doomed? It’s desperately avoiding the same fate as the dunk contest. We’ve got a few star players to watch!

With Mike Trout and Clayton Kershaw set to miss the MLB All-Star game because of injury and scheduling respectively, the game feels like a weird mix of b-list stars and out-of-nowhere breakouts. Unfortunately, the home run derby is a similar field. The eight-man competition is going to pit some of the literal biggest sluggers in the world against a number of people neither of us would recognize if they offered to sign their own jersey.

The field is highlighted by Aaron Judge and Giancarlo Stanton, more than 13 feet of dinger launcher. Along with the pair, they each bring along a teammate (coincidentally) in Gary Sanchez and Justin Bour. The bracket style tournament will also coincidentally match up the two sets of teammates against one another in the first round.

Outside of the Yankees-Marlins matchups, the rest of the derby field is populated by the NL’s version of Judge, Cody Bellinger, the NL’s other version of Judge in that he may be a contender for league MVP right now, Charlie Blackmon, as well as Miguel Sano and Mike Moustakas.

Everyone is certainly rooting for a Judge-Stanton final in the derby. Everyone is also rooting for a Bellinger-Judge second round. The worry here has to be that one of Judge or Stanton gets knocked out before the finals. The rest of this field, though talented, lacks star power. I don’t see an All-Yankees final or an All-Marlins hometown final being nearly as exciting in either case. And if the top two favorites somehow both go down, this thing could get ugly from an interest standpoint.

With a lack of star power, is the derby turning into MLB’s version of the slam dunk contest? I don’t even know what that analogy is supposed to mean, but it feels right. We are sticking with the timing clock this year, as opposed to outs committed. That rule change supplied the derby with a boost in its first iteration last year. I don’t know if that alone can save this thing if Judge or Stanton go down, but it can’t hurt the proceedings.

Your dunk contest analogy is spot on, despite the awkwardness of the comparison. The 2017 Home Run derby is teetering on the brink of obscurity, fighting desperately to avoid the fate that has befallen our once beloved dunk contest. Both the slam dunk and the home run are amazing to watch and incredible performances. Yet we see both with such frequency, that a mere competition containing only home runs or dunks is no longer fun enough. It’s hard to care who wins if our favorite stars are not involved. It’s hard for our favorite stars to care when there is no money involved.

That being said, I am stoked that Aaron Judge and Giancarlo Stanton are both in this year’s derby! Both will put on a great show, as will Gary Sanchez. I assume most MLB fans have not forgotten the show he put on last August. I know Yankees fans have not. Those three players have me excited, but as you noted, the remainder of the field leaves something to be desired. While all excellent players, none of them brings the star power that everyone wants. None of them make you stop what you are doing to watch them hit home runs. We need another Mark McGuire versus Sammy Sosa. Here’s my dream scenario for the 2017 Home Run Derby.

Eight players participate in the home run derby, and one must be the defending champion. One must also be the current home run leader in all of baseball. While our current format does include the league leaders, we don’t need them all. We need stars from here on out.

More Entertainment: Marvel’s Inhumans Just A X-men Knockoff, But Why?


You could convince me to replace Cano with a member of the Boston Red Sox, or to insert a different member of the Chicago Cubs. Pujols is there for what he’s done in the past, not currently, but I’d love to see him face off against the young guns! I’d be okay replacing Goldschmidt as well, perhaps with former champ Todd Frazier, but he’s pretty awesome in his own right. There is no definitive right answer. All I know is that the first four guys noted above must be included.

Photo Credits: Call to the Pen and 10TopList.net