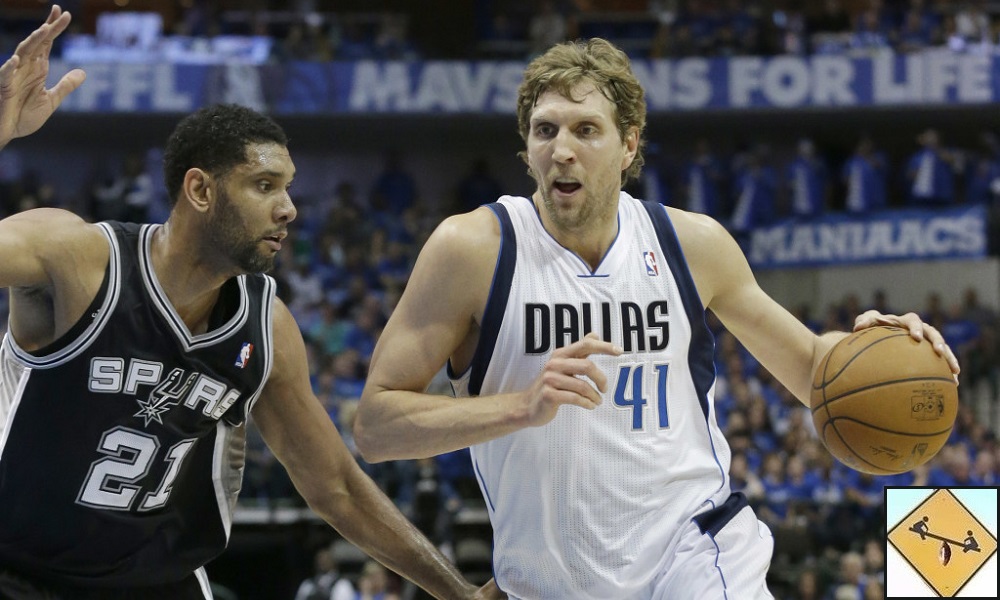 Kobe and Curry aside, the biggest storylines in the NBA are first round 2016 NBA Playoffs Upsets! The teams have been all but decided and the Mavericks and Pacers enter with major upset potential.

The Golden State Warriors seemed like they were conceding the all-time record with the way they played against Memphis last week, but they came back late for the victory. Then, on Sunday night, Golden State topped San Antonio to ruin the Spurs’ chance at a perfect home record while also extending its own record to 72-9: one game away.

Elsewhere, just a handful of games remain total in the NBA regular season, and we almost have the playoffs completely set. The muddled middle of the Eastern Conference is interesting, especially with the way the Charlotte Hornets have looked during the season’s second half and with the upside of the Detroit Pistons. With everyone healthy, the Miami Heat also pose a threat. Out West, surely none of the upper-echelon clubs want the Houston Rockets to get in after their run through the postseason last year. The Portland Trail Blazers also seem frisky outside the top four seeds.

As for those top four seeds in each conference, they are legendarily great, especially in the West. The Oklahoma City Thunder and Los Angeles Clippers have each easily eclipsed 50 wins, and they seemingly have no shot at making the NBA Finals. Before we get too far ahead of ourselves though, as far as likely opening-round matchups are concerned, do you foresee or like ANY possible upset?

ALSO ON BUZZCHOMP: Why the Warriors Had to go For Wins Record

I don’t see any of the top four teams in the West losing in round one. As for the East, so many of the individual matchups are yet to be determined. Sure, I could see the Hawks losing as the three seed, but they may not finish any higher than six with the way the teams are bunched together. So let’s look at this another way. Is there any franchise you would pick to take out the Cleveland Cavaliers or Toronto Raptors in round one?

I would like Detroit to give Toronto fits with Andre Drummond inside, good wing defenders and Reggie Jackson putting up 25-30 points but still don’t have the confidence to actually select the Pistons to advance in such a scenario. After all, the Raptors have been cruising for a while now, having been slotted safely in the conference’s top two for quite some time. The same goes for Cleveland. How can we even make a judgement on this team until the playoffs begin? Its season doesn’t really begin in the minds of fans and critics until the postseason anyway.

That was the long way of saying, much like where we stood some weeks ago, the top six in the NBA seem head and shoulders above the rest of the league. Maybe we should instead talk about the changing tides of the Philadelphia 76ers’ front office and what happens if the lottery balls fall its way. Or talk about whose future is brighter, the Anthony Davis-led Pelicans or the Towns/Wiggins-led Timberwolves. Or what the Sacramento Kings can do about Boogie Cousins. It seems the “crappy” teams are actually more interesting despite us being so close to playoff basketball. The NBA has always been the sport that leans heaviest on haves versus have-nots. 2015-16 is taking that to the extreme.

It’s ironic that the Western Conference has four of the six dominant NBA teams, yet the conference as a whole is not as good on paper. Perhaps it’s because of those four teams’ dominance, but the final playoff spot out West will likely go to a team with a .500 record or below. In the East that final spot has been claimed by a winning team. Currently the 5th seed out West has the same record as the 8th seed in the East. Just saying.

First round playoff upset potential is definitely the most intriguing storyline heading into the postseason… if we set aside Kobe Bryant’s final game and the Warriors setting the all-time NBA wins record with number 73 in their final game of the year (I’m assuming they get the final victory). Kobe is the MOST interesting thing happening in basketball right now, with the Warriors a close second. I pretty much assumed Golden State would get the record all season, but some recent adversity has proven just how difficult it is to set an all-time mark like this. Because I’ve watched Kobe from the beginning, it’s an amazing event when an era comes to a close. Yet once that’s done, it’s all about the NBA Playoffs and upsets!

Despite the team’s best efforts by limiting Dwight Howard, I believe the Rockets seize the final spot out West setting up an intriguing first round series against the Warriors. Yet there is no upset potential here. Only one series in the West has a chance for an upset, the Dallas Mavericks versus the San Antonio Spurs. While the Blazers and Grizzlies can both put up fights against the Clippers and OKC respectively, it’s the Mavericks who enter the playoffs with a history against their opponent. Dirk knows the Spurs and if anyone can rally his team for a one round outburst its Nowitzki and the Mavs. I don’t believe it’s likely, but its got upset potential. The East is where the real shenanigans can happen.

No one is defeating the Cavaliers in round one, but if the Pacers and Raptors face off then I’m calling the upset. I also like the Hornets over Atlanta, but no team has more to prove, or a bigger chip on its shoulder, than the Pacers. They went deep in the playoffs just two seasons ago, before injuries derailed them last year. Indiana certainly is not as good as Toronto, but motivation can go a long way, so if anyone manages to pull off a first round upset, it’s the Pacers.

Boston also has serious playoff potential, but it’s no upset for them to defeat the Heat in round one. They are a scrappy young team that is going to push its opponents to the brink. Stay tuned for some round two noise from the Celtics as they prove all the haters wrong.