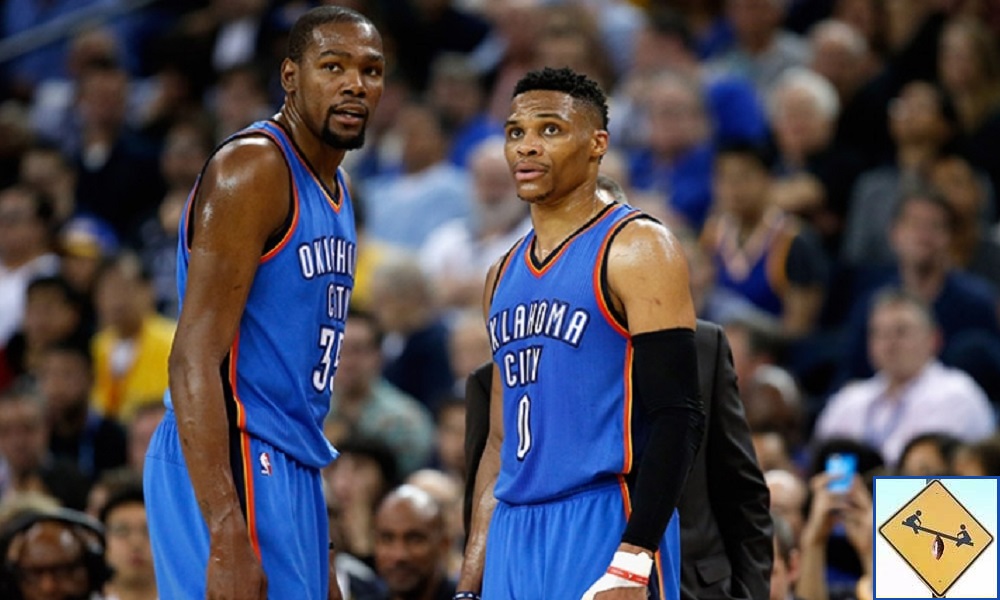 The 2016 NBA Playoffs have been defined by lopsided games and crushing defense. The best players may be in the conference finals, but everything we thought we knew has been proven wrong.

It’s only been one week and already everything we said after last weekend no longer holds water in these NBA playoffs. The Cleveland Cavaliers’ defensive weaknesses were on full display for the entire league to see. They lost both Games 3 and 4 in Toronto in the Eastern Conference Finals, getting torched by the two-man team of Kyle Lowry and DeMar DeRozan. I don’t even care that Cleveland came back to house the Raptors at home in Game 5. The Cavs haven’t been able to generate offense on the road this round. Two of their best players, Kyrie Irving and Kevin Love, have also been unplayable late in games because of their invisible defense.

It’s been re-reported this week that folks with the Warriors last year were disappointed that Irving and Love were injured heading into the NBA Finals. As the opponent, the Warriors felt the Cavaliers were a better club without those two guys on the court. There has been more evidence of that in this conference finals.

Even if the Cavs win, I no longer think they would be favored against either Western Conference team. Earlier in the week I thought they would have the edge on Oklahoma City. Well, the other development has been with the Thunder. They are up 3-2 over the Golden State Warriors in the Western Conference Finals after blowing out Golden State multiple times. Home-court advantage proved drastically important in this conference as well, as GS got run off the floor playing in Oklahoma City. Now it has to travel back there for Game 6, trying to avoid being eliminated.

And the last point I have come around on pertains to the possible elimination of the Warriors. During the regular season, I strongly believed that failing to win the NBA title would not ruin the wins record if they got there. Now, I have changed my mind. If they get eliminated by the Thunder here and fail to make the championship, that ruins the 73-9 because of the way they have been beaten. The losses (to this point) haven’t been fluke losses where the bounce of the ball could change the course of the series. These have been flat-out beat downs by an OKC team that simply looks better on both ends.

Having said that, it remains idiotic to think GS should not have gone for the record. People are squirming out of the woodwork to argue that Golden State is tired now and if they had rested down the stretch of the season, things would be different here. There is no way to know if any side of that is true. How someone can truthfully believe a 71-11 or 70-12 Warriors team would be better set up for a title right now is asinine. It’s just baseless, inarguable drivel. The Warriors won’t be thought of highly if they lose, but they went about their season in the proper way.

Oklahoma City is the real story that seemingly caught everyone off guard. Durant and Westbrook did well in the playoffs as a duo in years past, but showed their youth and immaturity as they ultimately fell to more dominant opponents. Last season they were not at 100% and the Warriors made us forget they even existed. Now both players have matured and completely stepped up their game in the playoffs. I’m not sure there is a better defender in the league than Russell Westbrook. Only LeBron challenges him in my opinion.

So no matter what the Warriors did or did not do prior to the Western Conference Finals, it’s what the Thunder are doing that has defined the series. If they don’t beat Golden State to reach the NBA Finals, I’d be surprised. Most of the games have not felt close. The Warriors have no answer on a consistent basis for the punishing attack that Oklahoma City is waging up and down the floor.

Ultimately I’m disappointed in all the lopsided victories in both conference finals. When the Cavs have won they’ve done so with ease. It’s like Toronto forgot how to play. Yet when the Raptors have won, its was no less punishing. The final scores were much closer, but the actual games were not. In the West we’ve seen the Thunder dominate nearly every game, with the scores not being close in the end. How can the four best teams in the league be blowing one another out on a nightly basis?

You mentioned home court advantage and perhaps this is the true culprit. Each team is playing harder and with extra bite at home. Their opponent has the air knocked out of them and unintentionally saves something for their own return to home court. What else could possibly explain this? Golden State is still a great team, yet OKC has made them look mediocre. Toronto is also very good, but Cleveland made them look like the Sixers multiple times. Yet both Toronto and the Warriors played dominating games as well. It’s a seesaw that is hard to watch as fans.

We don’t know if we are going to get good basketball or not, and that sucks. By this point in the season every game should be great. The best players have survived, yet on a nightly basis the games are not nearly as competitive as logic would dictate. This is going to tarnish the losers’ seasons for sure. Golden State and their wins record, assuming they are eliminated, will be completely overshadowed by whomever wins the NBA Finals, because as you noted, they have been blown off the court multiple times. Toronto has had a great season, but unless something drastic happens, it will be forgotten in the wake of LeBron returning to the Finals once again.

The only solace is in knowing that the NBA Finals should be amazing. Unless we continue with our streak of blowouts. Then it will just be one lopsided game after another, with home court advantage deciding the victor.