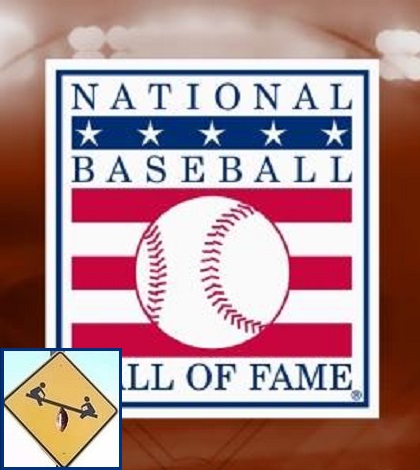 While noteworthy, the 2016 MLB Hall of Fame Class was a head scratcher. Why only two guys with so many deserving players? Why David Eckstein at all? Plus the steroid snubs. Time for debate.

The votes are in; we have our class of 2016 for the MLB Hall of Fame, and the list is two names long.

I have to be honest; I was expecting a longer list. We really needed a longer list to clear up some of this backlog. There aren’t enough slots each season to vote in all the deserving guys (which, we assume, is the reason those few didn’t vote for Griffey Jr.; because they felt they needed that slot to give someone else a vote).

I’m not sure Jim Edmonds would ever deserve to get into the Hall, but he didn’t deserve to be dropped from the ballot his first year of eligibility. There simply weren’t enough votes to go around to keep him above that 5 percent minimum threshold. He was one of the greatest defensive center fielders of all time and a superb hitter to boot. And now he’s off the ballot.

As is Mark McGwire because he has been on for 10 years, the new threshold. It certainly comes up fast.

And it seems that Barry Bonds and Roger Clemens may never make it above that required 75 percent either. Even though the Baseball Writers Association revoked the voting rights of writers who were too far removed from active duty, the “younger” writers still didn’t get either player to even 50 percent in this vote. What else has to happen or can happen? This was the year for each to get a huge boost and it didn’t happen.

On the positive side, Griffey is my favorite baseball player ever, and it’s awesome that he is the new record-holder for largest percentage received. Based on the voting numbers, it appears as though Jeff Bagwell, Tim Raines and Trevor Hoffman will join Griffey (and Piazza) in the Hall next season. They are too close not to.

But why so much love for Hoffman and none for Billy Wagner? This had been discussed before the voting results were released, but it’s worth repeating: besides one category (saves), Wagner is a better pitcher than Hoffman. The lure of those silly counting stats like saves still overwhelms most other rhetoric. Wagner will likely never get in, and Hoffman will likely be a 2017 Hall of Famer. That’s not quite fair in my mind.

I bet those same two writers who voted for Eckstein left off Griffey. Crazy can’t be explained, but who is the third man to snub Junior? I knew he wouldn’t get voted in unanimously, but that doesn’t make it any less ridiculous. The point of voting is to select the most deserving players, not slide things around so David Eckstein gets some recognition.

You passed over a few other key names who will likely never get in, because they are getting too few votes at the moment. Jeff Kent, Fred McGriff, Larry Walker, and Gary Sheffield are likely finished. I’m not sure if any of them are hall of fame worthy, but I’d have guessed at least two made it. I was wrong.

I was also wrong about this year’s class. While its pretty cool that Griffey and Piazza enter the hall together, spreading the spotlight on these two great careers, its unfortunate that two more guys didn’t make the cut. More deserving names will be added next season, making it that much harder for Bagwell, Raines, Hoffman, and Schilling to get the required vote you expect them to achieve next year.

But my real beef is with Bonds and Clemens. History is a torrid mess of mistakes and human failure. I’m all about forgiveness, and by recognizing the great careers of these two men, Major League Baseball can forgive them for their transgressions against the game. Both men were great prior to using illegal substances. They became larger than life afterwards. Not a single fan would change what happened. It was too much fun watching them dominate.

Forgive and vote them in, that’s my opinion. Yet you appear to be correct. Both men are barely sniffing fifty percent at this juncture in time. I don’t see what changes in the coming years to swing things in their favor. Will Pudge Rodriguez and Manny suffer the same fate? Survey says, yes.