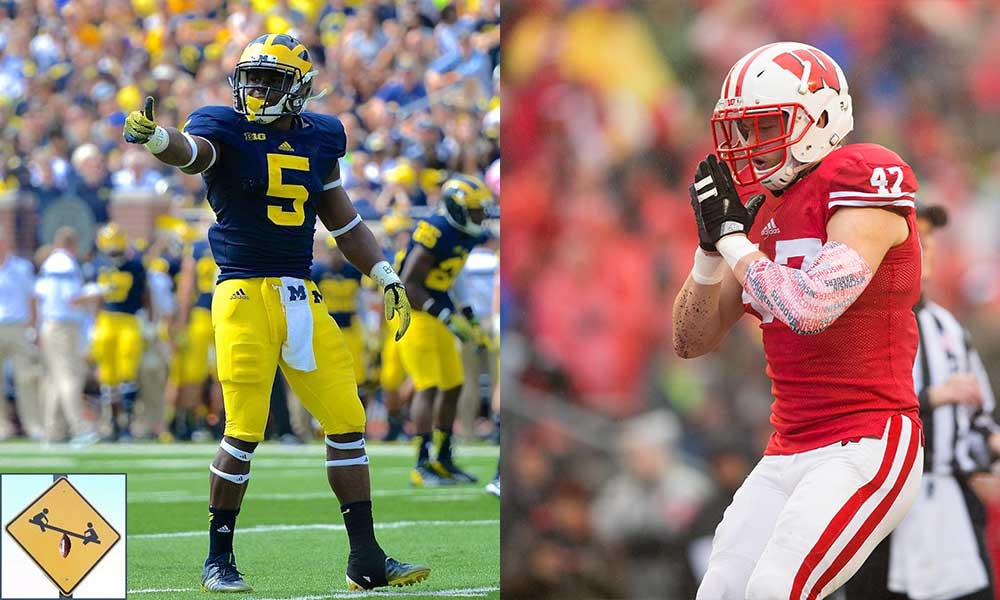 Three major matchups between top 10 teams threaten to shake up the 2016 College Football rankings. The pretenders are about to be exposed and we can’t wait!

This week in college football, three different matchups are taking place between top-10 nationally ranked teams, each in the same conference. On Friday evening, #7 Stanford plays #10 Washington. On Saturday, #8 Wisconsin plays #4 Michigan and #3 Louisville plays #5 Clemson. It is quite a delectable slate of games for the beginning of October.

It is also quite a coincidence really. In the preseason polls, all of Washington, Wisconsin and Louisville were outside the top 10. The Badgers were actually unranked entirely. Few could have predicted that this weekend would deliver such a trio of matchups, but as surprising results piled on, these winners kept moving up.

So is this a brutally obvious sign of parity or instead a sign that simply the wrong teams were chosen atop rankings in the preseason? College football has always had issues with preseason polls because, for one, they are pretty baseless. Entire rosters turn over as seniors are forced to graduate and the best upperclassmen leave for the NFL. Incoming freshmen all enter at different levels regardless of their high school scouting rankings. Teams that were good the year before don’t return anything close to the same rosters, and extrapolating those differences is guesswork.

Yet there seems to be a different development this season. As the top of the rankings turn over, there has also been a wave of competitive games from the lowest of the low teams: FCS and non-Power 5 schools. These games are scheduled as cupcakes for national competitors to get a figurative week off, but this year, a number of supposed pushovers gave top teams all they could handle or outright won. In the first two weeks alone, seven FCS teams defeated FBS teams, and that doesn’t count the teams on the scraps of the FBS who won as well.

I’m not sure if this is a sign of anything. It may just be a fluke that a handful of these outcomes all took place in the same few weeks of the same season. Or it may tell us that the landscape of college football is closer in talent and execution than we think. Perhaps the days of undefeated teams are over because literally any opponent can win on any day.

That would make the journey to the College Football Playoff more interesting knowing a loss or two doesn’t eliminate someone. It also, though, could make top-10 matchups such as this week not as valuable in the long run. Who cares if, for example, Washington falls to Stanford. If the Huskies avoid an upset, they will win all the rest of their games and will be in the running for a conference title. Instead of winning the most prominent games of the regular season, is college football more about avoiding a slip-up? If so, it is certainly not as entertaining a way to think about a season.

College football is trending towards parity, that is undeniable. But in terms of the rankings and our Top 10 teams, we simply have a bunch of pretenders trying to hang with the big dogs. Our top five teams are pretty legit, but overall the reason for the drastic change from preseason until now is that no one else is dominant, no one else is a sure thing.

Call it parity, or call it slightly above average football. Either way it makes for a great season. The three major matchups this weekend are a perfect example of the haves and have-nots. Stanford is an excellent football team. Washington is just pretty good. Michigan is an excellent football team. Wisconsin still has to prove itself in my book. Louisville and Clemson is probably the most even matchup of the bunch, but if Clemson truly asserts itself, then we know Louisville was just pretending.

I’m convinced that what we want to happen is actually taking place. We want these teams to all be pretty damn good. Its more fun to watch. One loss does not eliminate a team from playoff consideration and there is significantly more drama in terms of who’s in and who’s out of the College Football Playoff.

More Sports: Who Uttered the Worst NFL Quote this Season?

Yet we still have those couple of college football teams far and away better than the field. Will they snatch up all four playoff spots? Not this season. There will be one or two spots up for grabs, with this weekend’s games factoring heavily into the seeding.